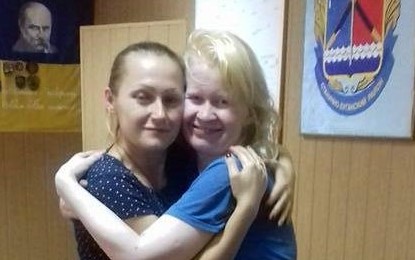 Ludmila Surzhenko is, thankfully, safely on unoccupied Ukrainian territory, but she will need time to recover from the physical and psychological effects of the nearly three weeks she was held prisoner by militants from the self-proclaimed ‘Luhansk people’s republic’.  Her finger is badly swollen after the militants applied tweezers for several days and held her in handcuffs trying to force her to ‘confess’ to spying or acts of sabotage for the Ukrainian Security Service [SBU].

The 39-year-old Luhansk woman, who has a serious hearing impediment, arrived at the checkpoint into Ukrainian government-controlled Stanytsia Luhanksa on the evening of July 29, seemingly thanks to intensive efforts by local volunteers and her friends to secure her release.  She is now in hospital, where doctors are monitoring her condition.

Iryna Herashchenko, MP and Ukraine’s humanitarian envoy at the Minsk negotiations, expressed anger that, yet again, the militants had denied any knowledge of Surzhenko’s whereabouts at the last meeting in Minsk.  She says that the torture methods used against her will “be the subject of a hard-hitting discussion during the next Minsk humanitarian group skype conference on hostages.

Herashchenko says that she will be demanding that the OSCE Coordinator organizes a group visit of Ukrainians held hostage on occupied territory.  Some of them have been held for years without either the OSCE’s Special Monitoring Mission or other international organizations being allowed to see them.  She asserts that all international organizations have access to Ukrainian prisons.

She notes that the torture methods in Surzhenko’s case were for the first four days and then they probably kept holding her until the physical signs of torture faded.  Herashchenko is not alone in fearing that this is the reason why the militants make it so hard to see the over 132 POW and civilian hostages whom they are holding.

As reported earlier, on July 13 Surzhenko crossed from occupied Luhansk into the Ukrainian government-held town of Stanytsia Luhanska to get some humanitarian aid.   She was detained at a militant checkpoint on her return. Witnesses reported then that the militants had forced her to take everything out of her bags, and they had taken her phone away.

Friends and family sounded the alarm that evening when she failed to return.  Her mother was convinced that the problem was that the batteries in her daughter’s hearing aid had gone flat and that she simply couldn’t understand what the militants were asking her.

The militants denied any knowledge of her and then the following day, her phone was switched on again.  Her disability means that she communicates by text messages, but it was clear that the person responding to messages was not Suzhenko.  The messages were to other contacts, not to her mother, and when one of the friends sent a message asking what had happened, there was silence and then the contact was abruptly cut off.

Herashchenko noted with concern that the number of hostages is on the increase.  As reported here, Roman Sahaidak, a 30-year-old entrepreneur from Krasnodon, was abducted on June 30. The men who stopped and forced him into their car were in military gear.  The following day, men saying that they were ‘from the ‘LPR ministry of state security’ appeared at his flat and carried out a search, taking away everything that could be removed.  The same thing happened at the home of his parents.

His parents believe that his disappearance could be linked with the person he was with, whom they know only as Alexander.

The journalist and blogger Denis Kazansky who is himself originally from Donetsk, believes that such abductions happen virtually every day, but that most go unreported because relatives are frightened that the abducted person could suffer if they say anything or because they hope to find ways to persuade the militants to release them.

The following are just some of those known to be held hostage, with the militants often staging ‘trials’ on grotesquely absurd charges.

There is also mounting concern about the ill-health and likely torture used against blogger and journalist Stanyslav Aseyev who was seized early in June this year.