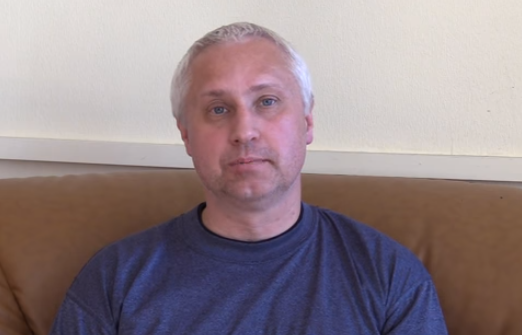 Vitaly Rudenko, a judge from the Luhansk Regional Court of Appeal, was freed on July 30 after nine months held prisoner by militants from the self-proclaimed ‘Luhansk people’s republic’ [LPR]’.  Rudenko was seized in October 2016, when he tried to enter military-controlled territory to attend his father’s funeral.

As reported, he had been aware that as a judge working in the area, he was at risk, but had no choice.  An acquaintance with ‘LPR’ connections had assured him of free passage, but this proved to mean nothing and he was stopped by militants at the first checkpoint.  They called the so-called ‘LPR security service’ who arrived and took him away.

It soon became clear that they knew about all the court rulings he had passed, and were particularly aggrieved by one ruling passed by Rudenko and a panel of judges. This upheld the detention of the general director of the state enterprise ‘Luhansk water’ whom the SBU accuse of involvement in a terrorist organization, namely LPR.   This, the militants claimed, had resulted in disruption to the water supply in LPR.   They called it ‘state treason’.  It was useless to try to explain that he could hardly be guilty of ‘state treason’ if he was a citizen of Ukraine, who carried out the duties of that country.
Rudenko was held in a basement, and although he was subjected only to psychological pressure, threats, etc., he explained that he would hear people taken at night for ‘interrogation’, and was aware what kind of torture hostages faced, with bags placed over their heads, beatings and the use of electric shocks.

Rudenko was a ‘catch’ for the militants and they used threats, both against him and his family, to force him into speaking on a propaganda video, rejecting Ukraine and saying that he wants to remain in ‘LPR’.   They said that he would not be exchanged, and that, one way or another, they would ‘break him’.

He did not wait until they intensified their efforts, and appeared on the propaganda video.  He is adamant that he always was and remains a Ukrainian patriot, and that the film had been forced on him, “an act of despair”.

The ‘Patriot’ volunteer group was involved in trying to secure his release from the outset, and it was their efforts, in cooperation with Ukraine’s SBU [Security Service], that finally got him released.

While Rudenko might want to justify his video appearance by stressing the widespread use of torture, there is unfortunately all too much evidence to suggest that it is very widely used.  Even 39-year-old Ludmila Surzhenko, who has a hearing impediment and who seems to have been detained because she was unable to hear what the militants at the checkpoint, faced some degree of torture, and the bizarre ‘confessions’ often produced by the militants strongly suggests the use of torture.