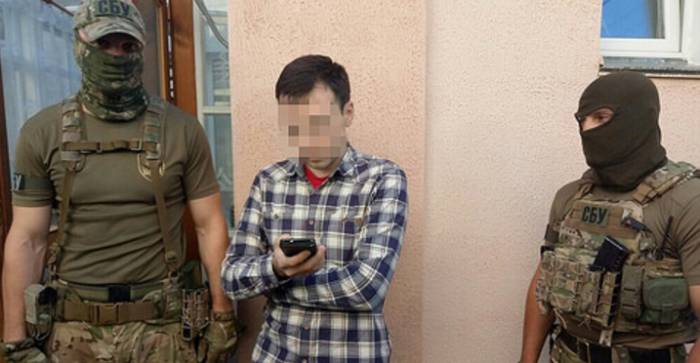 Ukraine’s Security Service [SBU] has arrested a Zhytomyr blogger and journalist whom they accuse of “preparing and circulating anti-Ukrainian material on the instructions of Russian supervisors”. The charges include state treason so, if convicted, Vasyl Muravytsky could face a 15-year prison sentence.

While it remains to be seen what evidence the SBU has for all the four charges mentioned, the case seems worryingly reminiscent of the long detention and essentially aborted trial of Ivano-Frankivsk blogger Ruslan Kotsaba.  Although a court recently overturned his acquittal, the Kotsaba case did Ukraine only harm, with Amnesty International declaring him, with cause, a prisoner of conscience.

The SBU carried out a search of Muravytsky’s home on August 1, and have now laid charges and are seeking to have him remanded in custody.  While he is not named in their reports, local media identified him immediately.

The SBU’s report asserts that their officers have stopped activities in the Zhytomyr oblast which endanger the country’s information security.  They say that they have established that Muravytsky had “from 2014 produced tendentious publications on the commissioning of the management of Russian state propaganda information agencies.

Muravytsky is referred to as an “information mercenary” and said to have received the topics and preferred content of the material by post or by Messenger, and sometimes been allowed to himself chose his theme.  He allegedly received payment via international online payment systems.

The material itself was published on six websites administered from the Russian Federation and occupied Ukrainian territory. The SBU claims it to be significant that the author had first signed under his real name, but later gone over totally to a pseudonym.

There have been ‘linguistic and forensic psychological expert assessments’ of the texts.  These “confirmed their manipulative influence on the consciousness of readers, and that they stir the audience to carry out specific actions to harm the sovereignty and independence of Ukraine”.

The SBU asserts that their experts have found that the semantic-linguistic content “also contains calls to stir up national enmity within the country and between Ukraine and neighbouring friendly countries”.

Muravytsky has been informed he is suspected of: state treason (Article 111 § 1 of the Criminal Code); encroachment upon Ukraine’s territorial sovereignty and integrity (Article 110 § 2; deliberate actions aimed at inciting ethnic, racial or religious enmity (Article 161 § 2) and creation of a terrorist group or organization (Article 258-3  § 2).

There is no information to explain the charge of creating a terrorist group. A contract for services has been posted by Zhytomyr.info which presumably corresponds to the one which the SBU says it found during the search.  It agrees amounts of payment for comments, articles, etc. for the international information agency ‘Russia Today’.

Russia Today is state-funded and is part of Russia’s propaganda machine knowingly spreading lies about events in Ukraine (about the tragic fire in Odesa on May 2, 2014, for example and the war in Donbas).  This does not, in itself, make a contract with it proof of state treason, nor even illegal.

Muravytsky’s interviews for the Kremlin-backed militant website News Front can easily be found on YouTube.  As was the case with Kotsaba, they are highly contentious, and contain numerous manipulative and downright dishonest assertions.

More is needed, however, for the charges, and at present, if the SBU has other evidence, it is not revealing it.  It is imperative that it does as a matter of urgency.  Russia is currently prosecuting and imprisoning Ukrainians and ‘dissident’ Russian citizens for no more than criticizing the country’s aggression against Ukraine, saying that Crimea is Ukrainian territory or criticizing the current Russian regime.  All of the above-mentioned charges are applied in such Russian prosecutions.  The Kremlin’s proxies in the self-proclaimed ‘Donetsk and Luhansk people’s republics’ are following in the same repressive tracks, as the ’14-year sentence’ against Luhansk blogger Edward Nedelyaev has demonstrated.  He was also charged with ‘state treason’ with this being how the Kremlin-backed militants interpreted critical comments about their so-called ‘republic’.