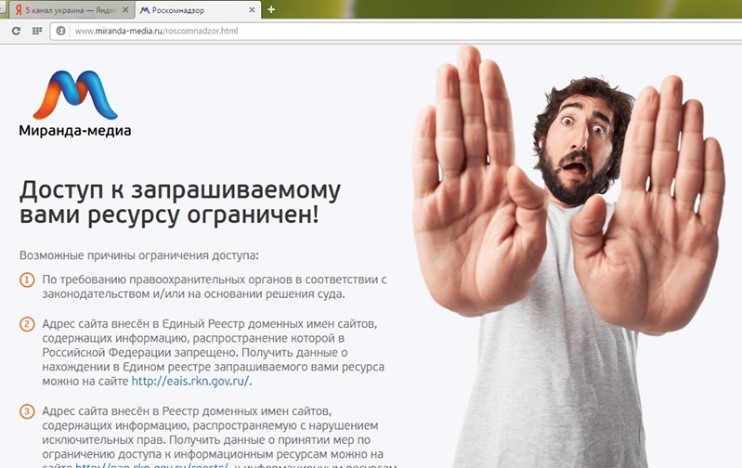 The list of sites Crimeans are not supposed to see includes vital resources reporting on rights abuses, arrests, etc.  The situation is particularly serious since the draconian new Internet restrictions which Russian President Vladimir Putin has signed into law apply in Crimea while it remains under Russian occupation.

The Crimean Human Rights Group reports that its monitoring was carried out in July 2017, checking the networks of five providers in five major Crimean cities (Simferopol; Sevastopol; Yalta; Kerch and Belohorsk).

11 sites were blocked by all five providers, although Roskomnadzor, Russia’s effective censor has only formally acknowledged banning five in Crimea and in Russia.  The five are: Censor.net; 15 Minutes;  RBC.ua ;  След.net.ua and linkedin.com.

In fact, the situation is much more serious, with one provider – Yaltanet blocking 26 of the sites monitored, and the providers in Belohorsk and Simferopol blocking 24.  For some reason, there were less restrictions in Sevastopol and Kerch with only 11 sites unavailable.  The fact that most of the sites in question give information that Russian state-controlled media either muffle or distorted makes it seem likely that individual providers are following instructions from above.

That is even more evident from the behaviour with Krym.Realii, Radio Svoboda’s Crimean service.  Russia’s last attempt to formally block the site was back in May 2016, and coincided with the criminal charges against Mykola Semena.  The 67-year-old well-known journalist is now on trial in Crimea, facing a mandatory five-year sentence, for an article, posted on Krym.realii, in which he expresses the same view of Russia’s occupation of Crimea as that held by the UN and all democratic states.

The announced ban on a website which receives US State funding, however, elicited a great deal of protest, and Russia backtracked.  Now, certain material gets blocked, not the whole site.

Other sites were not covered by the monitoring, but are also known to have been blocked.  They include the Ukraine Crisis Media Centre which Roskomnadzor banned over a press conference given by the world-renowned Crimean Tatar leader Mustafa Dzhemilev and others.  In it they called for a civil blockade until Russia released Crimean political prisoners, stopped crushing freedom of speech, etc.  Russia’s only response was to step up defamatory lies about Dzhemilev and the Blockade, while also increasing repressive measures inside Crimea.

The monitoring has shown that the number of sites blocked is much larger than was realized, with most either Ukrainian TV channels or resources reporting Ukrainian news.  The Head of the Crimean Human Rights Group, Olha Skrypnyk says that Russia is yet again demonstrating that it has no intention of observing fundamental human rights in occupied Crimea, such as freedom of speech and access to information.

The Kremlin has constantly tried to justify its invasion of Crimea by claiming that Russia needed to defend Russians and Russian speakers who were allegedly facing persecution and danger.  There was never any evidence to support this, unlike the situation now, when nearly forty Crimeans are imprisoned in Crimea or Russia for their faith or views, and Ukrainians are increasingly prevented from receiving alternative information to the official line, as presented by pro-Kremlin media.

The Internet restrictions which Putin signed into force on July 29 are also likely to hit Crimeans hard.  The new legislation, which has been condemned by international human rights NGOs, prohibits the use of VPNs and other Internet proxy services which make it possible to access blocked content by routing connections through servers abroad.