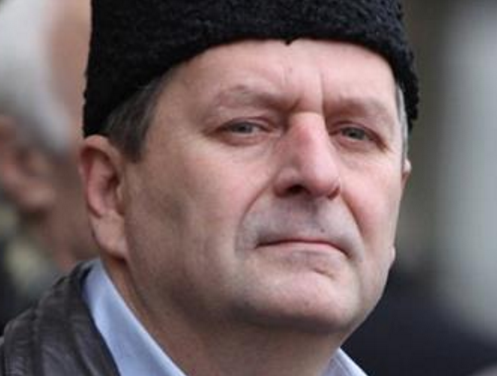 The charges are in connection with a demonstration on February 26, 2014 on Ukrainian territory and under Ukrainian law.  Not only does Russia therefore have no jurisdiction, but it has also provided no evidence to back its claim that this was a ‘mass riot’, and one that was organized by Chiygoz. The demonstration certainly annoyed the Kremlin since it prevented Russia effectively annexing Crimea without open invasion, and there are compelling reasons for believing that the so-called ’26 February case’ is part of its revenge against the Crimean Tatar Mejlis which foiled its plans.

The list of infringements is huge, but one is particularly telling.  Having discovered that ‘confessions’, convictions and prison sentences would not come easily, the Russian-controlled court separated the trial of Chiygoz from that of several Crimean Tatars accused of ‘involvement’ in the demonstration.  It then prohibited Chiygoz from attending his own trial, and all the court hearings have been with Chiygoz linked on poor quality video link from the SIZO or prison where he has been held since January 29, 2015.  That this was because Russia fears the support he enjoys from Crimean Tatars and other Crimean Ukrainians was particularly evident over recent months.  Desperate efforts were required to force Russia to even allow Chiygoz to see his dying mother for just ten minutes, and he was then prevented from being at her funeral.

Russia has tried to accelerate proceedings, and gave the defence a mere three days to prepare for the ‘court debate’ scheduled for August 7.  In fact, problems with electricity in the peninsula which Russia illegally seized, combined with its fear of bringing Chiygoz to court, meant that an electricity failure forced adjournment until Tuesday.  There had been time only for the de facto prosecutor Anastasia Supryaga to read out the prosecution’s part.

Supryaga claimed that Chiygoz’s guilt “had been totally proven by the material gathered in the course of the investigation”.

Most of the time she read very quickly and unclearly making it near impossible for people in the courtroom to follow, let alone Chiygoz from the SIZO.  She was asked several times to speak up, until she finally almost shouted: “I would like a break, it’s impossible to work, they keep interrupting me and generally behaving in a piggish manner”.

At that point Chiygoz called out that she “should come and sit here, next to me”. His lawyer Nikolai Polozov responded in a flash: “There’ll be time for that”.

There were effectively two demonstrations that day:  one organized by the Crimean Tatar Mejlis [self-governing body] and attended by around 10 thousand Crimean Tatars, Euromaidan activists and other Ukrainians.  They came to block a planned attempt by certain members of the Crimean parliament to push through a change in Crimea’s status.  The Russian Unity party, led by Sergei Aksyonov organized a counter-demonstration, with around 4 thousand pro-Russian demonstrators.

The first charges over the demonstration came 10 months later amid a mounting offensive against the Mejlis.

Russia’s so-called ‘Centre for countering extremism’ has inadvertently provided important information for the International Criminal Court at the Hague about the involvement on Feb 26 of a so-called ‘private military company’ ‘Black Sea’ and a paramilitary Cossack organization from Sevastopol.

These were the people pitted against the pro-Ukrainian demonstrators, yet no effort has ever been made to even question anybody about violence committed by pro-Russian activists.

Chiygoz is accused of having ‘organized’ a mass riot.  There was no mass riot, and he did not organize anything.  The notification of a demonstration (all that is required in Ukraine) was given by the Head of the Mejlis Refat Chubarov.  Having banished Chubarov from his homeland, Russia simply went for the Deputy Head, Chiygoz.

All of this, it should be stressed, is entirely conscious.  How, otherwise, can you account for the fact that the court refused the defence’s application to have Chubarov questioned as a witness.  It has also refused to question the Mufti of Crimea, Emirali Ablaev who was in exactly the same position as Chiygoz on that day.  Ablaev later chose to collaborate with the Russian occupation regime, and his testimony would now be uncomfortable for both him and the occupiers.

De facto prosecutor Supryagina cited various ‘witnesses’ and supposed ‘victims’ as proof of the charges. All alleged victims had medical reports dated May and June 2015, months after Chiygoz had been arrested and over a year after the demonstration.  None had sought medical treatment at the time.

Doubts about all such ‘victims’ were expressed in the damning assessment of this case provided by the renowned Memorial Human Rights Centre when it declared Chiygoz, Ali Asanov and Mustafa Degermendzhy political prisoners.

One other particularly dishonest and very telling assertion in Supryagina’s address on Monday was the claim that Chiygoz’s ‘guilt’ is proven by the sentences already passed on three young men who admitted to the charges against them.  None has given testimony against Chiygoz himself, and the Crimean Tatars were threatened with imprisonment if they refused to ‘confess’.  The two men – Asanov and Degermendzhy – who spent two years in detention and are still under house arrest and it had been made quite clear to them that they would be freed for giving false testimony against Chiygoz.  They refused.

The ‘debate’ in this ‘trial’ with a predetermined end continues on Tuesday before judges Viktor Zinkov (presiding); Ihor Kryuchkov and Alexei Kozyrev.  .