Izolyatsia: a Donetsk concentration camp too toxic even for Russia? Why would Russian Wikipedia censor information on the Donetsk Izolyatsia secret prison?Bandera. An Invitation to a Calmer ConversationMass detention of Crimean Tatars travelling to political trial in Russia Prisoner exchanged for Ukrainian hostages gets 17-year sentence in Russian proxy Luhansk ‘republic’80-year-old Ukrainian charged with trying to overturn the government via a Facebook repostCriminal proceedings under Article 111 of CC of Ukraine against the journalistsAbandoned mines in the Russian proxy Donbas ‘republics’ threaten environmental disasterOpinion on the political motives of criminal persecution and violation of human rights in the case of Sergiy PashinskyUkrainian political prisoner draws the life Russia has taken from himSerious threats to freedom of speech in revised version of Ukraine’s contentious media billRussia sentences Seiran Saliyev to 16 years on same political charges as his great-grandfather in Soviet timesState honour in Ukraine as Russia prepares horrific sentence against Crimean Solidarity CoordinatorLukashenko regime’s savagery may be backfiring in BelarusYulia Kuzmenko released from detention as ‘proof’ of involvement in Sheremet murder increasingly in questionBelarus: Peaceful protester killed in violent crackdown after claimed Lukashenko victoryStalin took Crimean Tatar Dilyara Alieva’s homeland and parents; Putin’s Russia has taken her sonRussia is plundering Crimean Massandra Winery for Putin’s oligarch croniesPro-Kremlin ‘Ukrainian’ propaganda media created in occupied Crimea as smoke screen for court at the HagueReturn to Yanukovych’s selective justice condemned as thousands protest plan to arrest Poroshenko
• Topics / Civic society 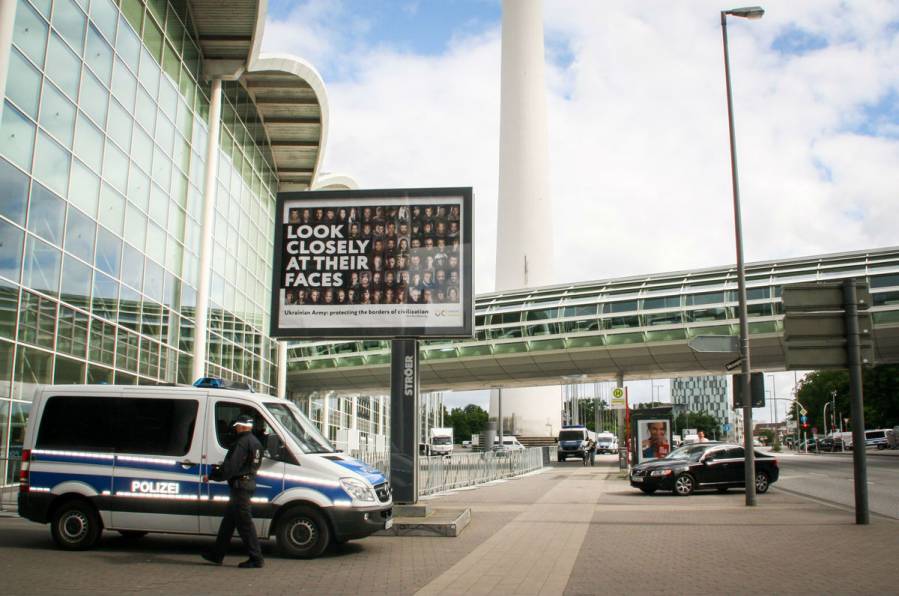 Ukraine has continued to face many challenges but something has changed in the last year. The country started scoring targeted and powerful public relations goals abroad. At Ukraine Crisis Media Center, where I am a co-founder, we have actively sought to change how Ukraine is perceived. Here’s five creative ways that we’ve tried to change the way others view us.

1. Drew attention to Russian aggression at the G20 with a billboard

During the G20 meeting in Hamburg, Germany, on July 7-8, Ukraine Crisis Media Center (UCMC) secured a major billboard 10 meters away from the official entrance to remind world leaders about the ongoing war in eastern Ukraine. We popularized the heroic faces of Ukraine’s service members, volunteers, and medics, who are defending the country from Russian aggression, as we did in 2016 with an ad in The Washington Post.

The billboard went up a few days prior to the G20 meeting. After the meeting between President Donald Trump and President Vladimir Putin, the ad was suddenly taken down before our contract had expired. The local advertising company finally admitted that they had received a call from an official who demanded that they take it down. Since they couldn’t fulfill the contract, they gave us a refund.

However, the campaign was a huge success: soaring media attention, zero cost, and an eyesore for Putin.

Ukraine scored its first-ever Cannes Lion at the Cannes Lion International Festival of Creativity for its September 2016 commemorative performance "Witness." Dedicated to the seventy-fifth anniversary of the Babyn Yar tragedy and conceptualized by UCMC, the powerful performance brought international attention to the tragic location of mass killing and burial by the Nazis of thousands of innocent people during World War II.

The award has also become a symbol of the emerging creative industry in Ukraine. It is the first Cannes Lion ever awarded to a Ukrainian organization and will trigger new ideas and projects in the industry.

In May, the Dutch Senate approved the Association Agreement between the European Union and Ukraine, but its passage was never a sure thing after voters rejected the deal in a 2016 referendum. So UCMC’s took to the airwaves in a blitz campaign called “Three Nations—One Freedom,” which drew attention to the role that Canadians of Ukrainian origin played in the liberation of the Netherlands from the Nazis and about the international solidarity of people who share democratic values. With the help of the Ukrainian diaspora in Canada, we reminded Dutch voters that Ukrainians through the Allied (Canadian) Forces helped defend the Netherlands’ freedom, and that their support of the Association Agreement means more to Ukrainians than just an agreement.

Our campaign consisted of a targeted TV ad campaign on major Dutch TV channels as well as a full-page ad in the Der Telegraaf newspaper, all prior to the vote. Wally Bunka, a 93-year-old Ukrainian Canadian who participated in D-Day and was decorated for his service by Canada and the Netherlands, was at the heart of the campaign. The video provided a glimpse into his grief and pride over his fallen 117 Ukrainian Canadians comrades who gave their lives for Dutch freedom and were buried in local cemeteries.

In addition, we brought Bunka to the Netherlands and Ukraine where he met with veterans, officials, diplomats, and his story became an immediate hit. In his May 8 speech commemorating World War 2, Ukraine President Petro Poroshenko mentioned Bunka and Ukrainian Canadian veterans.

4. Won Twitter spat over battle for Anna Yaroslavna through humor

When Putin claimed on May 29 in Paris that Anna Yaroslavna (also known as Anne de Kiev) established Russia-France relations, we took to Twitter. UCMC launched Ukraine’s official Twitter feed @Ukraine, and we responded with humor: when Anne became the Queen of France, there was only an endless forest of birch trees in Russia.

Five hours later, the Russian MFA responded with a tweet about the shared history of Belarus, Russia, and Ukraine. It sounded like Soviet propaganda, so we posted an animated GIF-picture from The Simpsons where the Russian ambassador to the United Nations changes the nameplate from Russia to Soviet Union.

Our response went viral and the spat was covered by major international media, including CNN, the BBC, Foreign Policy, BuzzFeed, and Quartz. All in all, we reached eleven million online users, received 45,837 retweets, and gained an additional 10,000 new followers.

5. Promoted Image of Ukraine as modern European democracy at Eurovision

The Eurovision Song Contest attracts over 200 million viewers every year and brings in thousands of tourists. For the host country, the contest offers a unique chance to tell its story.

Conscious of this, UCMC’s founding organizations CFC Consulting and Republic launched a series of projects to promote a simple message: Ukraine is a modern European democracy with tremendous potential in almost every realm of life, and Ukraine is a culturally diverse country with European values and a rich, thousand-year history.

We temporarily rebranded the People’s Friendship Arch in the heart of Kyiv into the Arch of Diversity. The grim steel relic of the Soviet era was transformed into an eye-pleasing rainbow, symbolizing Ukraine’s resolve to break away from its tragic totalitarian past and its determination to build new, prosperous, and bright future.

We also installed a massive “FREEDOM IS OUR RELIGION” banner on Independence Square, the site of the dramatic fight of the Ukrainian people for independence during the 2014 Revolution of Dignity.

Ukraine is changing, and through these efforts and more, the world is discovering one of Europe’s largest and most dynamic countries.

Nataliya Popovych is a co-founder of Ukraine Crisis Media Center in Kyiv, Ukraine.