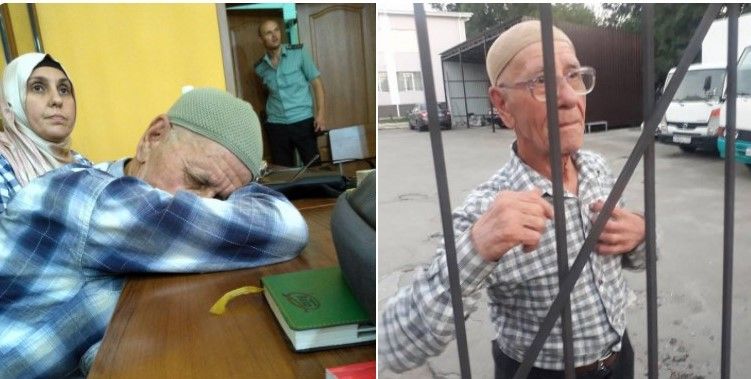 A ‘court’ in Russian-occupied Crimea has jailed Server Karametov for ten days for supposedly ‘resisting the police’.  The frail pensioner, who suffers from Parkinson’s Disease and other serious illnesses had already been fined 10 thousand roubles the previous day for what the same ‘judge’, Marina Vladimirovna Kolotsei chose to accept had infringed the rules for holding a picket.

The ‘court’ on August 9 was presented with all the medical documentation proving why any incarceration could seriously exacerbate his condition.  All of it was ignored, with Kolotsei claiming that he seemed in good health.  She also refused to recognize that the elderly Crimean Tatar had some difficulty understanding Russian, which was of major importance, since the police who had approached him spoke quickly in that language.

The hearing began at 10 a.m. and continued well into the evening. 9 August is marked throughout the world as International Day of the World’s Indigenous Peoples.  In Crimea under Russian occupation, the day saw at least three politically motivated trials of representatives of the main indigenous people of Crimea,  and an armed search of the home of another Crimean Tatar.  The search probably ended without Umer Emiramzaev’s arrest only because he was taken seriously ill and the FSB retreated.

Lawyers Emil Kurbedinov and Edem Semedlyaev are both involved in two of the political trials: those of imprisoned Deputy Crimean Tatar Mejlis leader Akhtem Chiygoz and of Crimean Tatar leader Ilmi Umerov.  It was for this reason that they were only able to attend the trial of Server Karametov after 18.00.  The guard, however, refused to admit them, saying that the court works till 6 p.m., though he was well-aware that the hearing was continuing.

The 10-day sentence will, of course, be appealed, but all such rulings are political and there are no grounds for hoping that the appeal will succeed, unless there is major pressure from abroad.

Server Karametov was arrested on Tuesday while holding a peaceful solitary picket outside the High Court in Simferopol where one of Russia’s most lawless ‘trials’, that of Akhtem Chiygoz, is coming to an end.

All video footage and photos show clearly that the elderly Crimean Tatar had not obstructed the way, and was simply standing with a placard reading “Putin, our children are not terrorists!”

He was detained by at least three officers, one of whom was videoing the entire detention, and physically manhandled when he refused to leave.

Russia is illegally imposing Russian legislation in occupied Crimea, yet even according to its draconian anti-protest laws, Server Karametov’s single-person picket was not in breach of the law.  The frail pensioner did indeed show ‘resistance’, but he was understandably indignant.  He had been standing peacefully with a placard telling the truth.  It is likely also that he had not fully understood what the officer was saying (the ‘resistance’ which a court under Russian occupation has decided is worth imprisoning a pensioner for, and the men he ‘resisted’ can be watched here https://youtube.com/watch?v=3f_MJdQIj_g ) 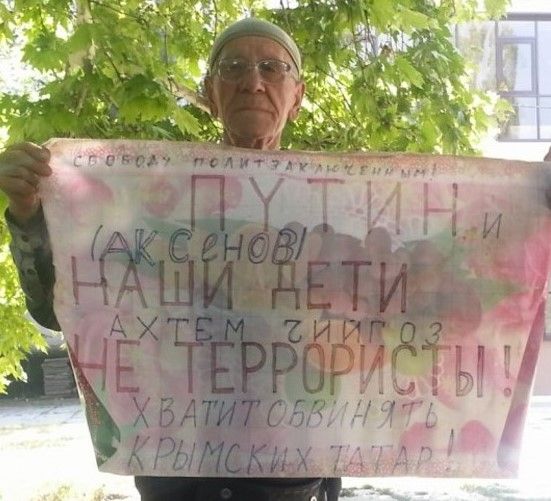 He was taken away to a police station and held there for some four hours without medication that he needs to take at a particular time and without any food.

He was then dragged off to the court to face charges of holding an ‘unauthorized protest’ and of ‘resisting the police’.

Kolotsei, who claimed on Wednesday that the elderly man seemed in satisfactory health had been unable to get both ‘convictions’ over on Tuesday evening, as Server Karametov became very unwell and an ambulance needed to be called.

After a hearing that ended at around 10 p.m., she imposed a 10 thousand rouble fine, having ignored multiple procedural infringements.  After a second day lasting almost 12 hours, she has now ordered the imprisonment of an elderly man who is in very bad health and who had done nothing wrong. 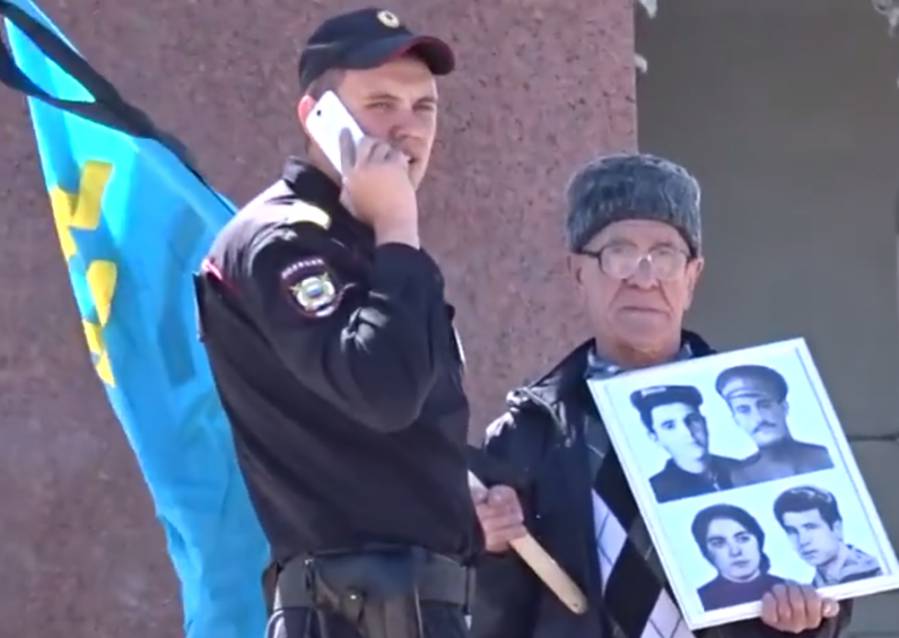 Despite his age and fragility, this is the second time under Russian occupation that Server Karametov has been detained without any justification for a solitary picket. On May 18, the anniversary of the 1944 Deportation of the Crimean Tatar People, he was taken away by police while standing with a placard honouring the victims of that crime, and held for several hours.