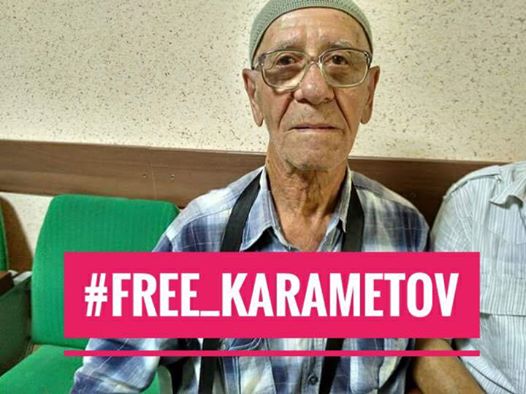 A court in Russian-occupied Crimea has upheld the 10-day prison sentence passed on 76-year-old Server Karametov for his peaceful picket in defence of Crimean Tatar political prisoner Akhtem Chiygoz.  This torture of a frail and elderly man who suffers from several very serious illnesses elicited outrage and revulsion far beyond Crimea, yet ‘judge’ Natalya Anatolyevna Terentyeva from the High Court in Simferopol claimed there no grounds for overturning the jail sentence.

If this is, as lawyer Emil Kurbedinov believes, a new stage in intimidation, it is one that could backfire.  As his colleague Edem Semedlyaev noted, it is Server Karametov who has achieved most.  Had he been left on August 8 to stand outside the High Court with his placard reading “Putin, Our children are not terrorists!”, his words would have been seen by 20 people at most.  Due to the heavy-handed action of the Russian-controlled police, and the extraordinary rulings passed first by Marina Vladimirovna Kolotsei of the Zheleznodorozhny District Court, and now Terentyeva, his words of truth have had much wider impact.  So too has the realization that there really do appear to be no limits to what Russia is prepared to do to silence and crush the Crimean Tatars and other Ukrainians who defend those facing persecution.

It was quite simply difficult to comprehend that this was really happening.  The elderly man had already been standing for some minutes when four police officers, approached him and told him to move.  Server Karametov was understandably indignant and said that single-person pickets are allowed.  They claimed that this was not allowed outside the court, and while the policewoman stood videoing, Senior lieutenant Andrei Vladimirovich Sergeyenko appeared to grab at the placard, saying that Server Karametov was in breach of the law.

The elderly man's illness means that he is not always fully in control of his speech and physical movements.  He was also suddenly surrounded by four police officers when he was doing nothing wrong, and became very agitated.  Their shameful treatment of him can be seen here https://youtube.com/watch?v=3f_MJdQIj_g

The police pushed him into their car and took him to the police station where he was held for around four hours without the medication he was due to take, without food and also being prevented from even using the toilet.

He was charged with two administrative ‘offences’:  infringing the procedure for holding a picket and, incredibly, resisting the police.

There were numerous procedural infringements, such as that the protocol in the file differed from that given to Server Karametov.  Olga Kravchuk, the policewoman who had drawn them up explained the discrepancies as due to the heat which Kolotsei saw no problem with.  The latter also ignored the fact that the ‘witness’ Igor Bushchenko stated in court that he had not signed the document that  had a signature, purporting to be his on it.

The hearing into the first charge on August 8 went on until well into the evening, with the elderly man having been held in such conditions for over 10 hours.  Kolotsei had refused to allow a medical examination and at one point he became very unwell and an ambulance needed to be called.

Kolotsei ploughed on regardless, and found him guilty of infringing the rules for holding a picket, fining him 10 thousand roubles, an amount the pensioner could not possibly afford himself.

The hearing into the second charge – of disobeying a police officer – was postponed until Thursday.   After a hearing that lasted nearly 12 hours, Kolotsei ordered the elderly pensioner’s imprisonment for 10 days.

The fact that she did not impose a small fine, as the law allows, suggests that she too was obeying orders from higher up.

She ignored all the medical documents confirming Server Karametov’s grave health issues and claimed he seemed in satisfactory health, although during the previous hearing an ambulance had been called for him.

Both Amnesty International and Human Rights Watch had reacted by August 10, demanding the elderly man’s release.

Elvina Semedlyaeva, one of the lawyers who attended the hearing on Friday, writes that Server Karametov was overjoyed to see them.  He is obviously in a bad state and asked in the courtroom to be allowed to go home, he was very tired.

He is, however, aware and emboldened by the support shown him.  People began gathering outside the court hours before the hearing, with others throughout Ukraine following this shameful persecution of a frail, but courageous man who is known to always speak out in defence of persecuted Crimean Tatars.