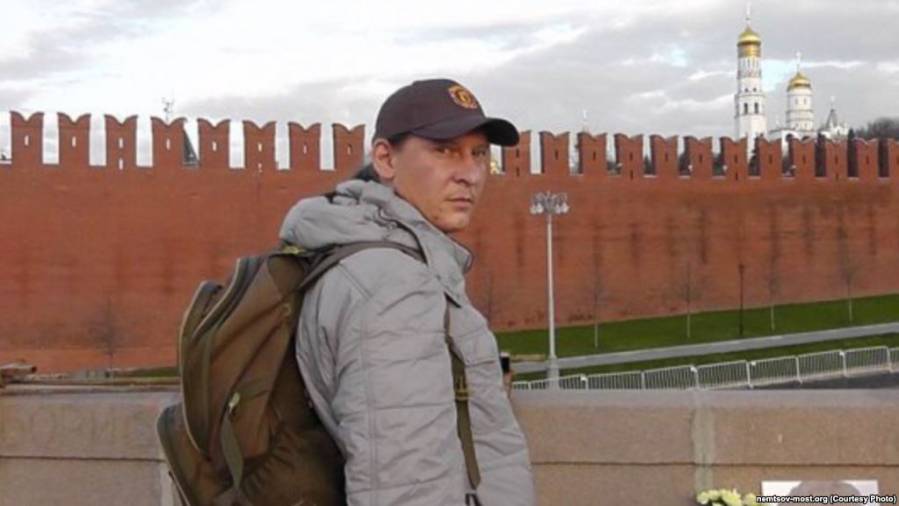 Russian activist Ivan Skripnichenko was guarding the Boris Nemtsov memorial in Moscow when he was attacked on August 15.

MOSCOW -- Olga Skripnichenko says she was always trying to talk her husband out of patrolling the site of Russian opposition politician Boris Nemtsov’s 2014 assassination, where pro-Kremlin activists have repeatedly vandalized a makeshift memorial and roughed up its volunteer guardians.

"I argued with him so many times trying to convince him not to go," she told RFE/RL in a telephone interview on August 25, her voice trembling as she fought to hold back tears. "He said that he’s an honest person, and that he had to go -- that it’s important to preserve [Nemtsov’s] memory."

The kind of violence that she feared was ultimately visited upon her husband, 36-year-old Ivan Skripnichenko, on August 15. That evening, he was manning the memorial on the Bolshoi Moskvoretsky Bridge, near the Kremlin in central Moscow, when he was punched in the face by an unidentified man, according to Olga and her husband’s fellow activists.

A week later, Skripnichenko died in a Moscow hospital where, according to his wife, he underwent surgery to repair the broken nose he suffered in the incident.

While the precise cause of his death remains unclear, Skripnichenko’s passing -- first revealed to the public by a fellow activist late on August 24 -- has made him a tragic symbol of what Kremlin critics call a state-sanctioned campaign of violence and harassment against the caretakers of the Nemtsov memorial.

"The activists on duty have had their arms twisted, toes broken, and belongings taken. All sorts of things have happened, but this is a first. But violence was always going to lead to something," Tamara Lugovykh told RFE/RL on August 25 at the memorial, where she was on duty protecting the site.

Nemtsov, a former first deputy prime minister and a prominent opponent of President Vladimir Putin, was shot dead at close range on the bridge late on February 27, 2015.

A Moscow court in July convicted five men from Russia’s North Caucasus region of Chechnya of the murder, though relatives and associates believe the slaying was ordered at a higher level and that the masterminds of the crime must be prosecuted.

The battle over the memorial began in the weeks following the assassination. Moscow authorities have repeatedly removed flowers, signs, and photographs at the site, which has been vandalized frequently as well.

The Guardians Of Nemtsov’s Memorial

Opposition politician Dmitry Gudkov wrote in a Facebook post that while the August 15 attack on Skripnichenko may not have directly led to his death, "it’s impossible not to see a tangential link."

"Over the course of these years (years!) the memorial has yet to be authorized. It’s constantly being pillaged by authorities. Not a single thug who has attacked the [memorial’s] defender has been even detained, much less convicted. And now, a death," Gudkov wrote.

News of the attack on Skripnichenko first emerged a day later, when a fellow activist wrote in a Facebook post that "some scumbag smashed the face of the person on duty" at the memorial. The post included a photograph of Skripnichenko clutching his nose in apparent pain.

Three days later, Lugovykh wrote on Facebook that the attacker had yelled "So you don’t like Putin?"

Lugovykh told RFE/RL that she saw Skripnichenko on August 18 when he dropped by the memorial.

"He had a terribly bruised face and completely black hematomas under his eyes," Lugovykh said, adding that she took a photo of him. IMAGE https://gdb.rferl.org/60D95265-F69B-40F6-B0EE-163CDDA0CD3E.jpg "It was all swollen, a terrible sight. I was scared even to take a close-up photograph."

Skripnichenko’s wife told RFE/RL that he had filed a report with police after the incident and that doctors examined him on the evening of the attack and gave him a clean bill of health.

But she said the doctors also recommended an operation to "straighten out" his nose. "They said the operation would take 30 minutes and that it was not a big deal," Olga said.

After undergoing the operation on August 22, Skripnichenko became unwell and died at the hospital in the early hours of August 23, she said.

"The doctor said it may have been a blood clot, or it may have been the injuries. They said they didn’t know yet," Olga, 37, told RFE/RL on August 25. She added that she expected to see the official autopsy results later that day.

Russia’s state-run TASS news agency quoted an official from the Moscow branch of the Investigative Committee as saying that "preliminary information" indicated Skripnichenko died of cardiomyopathy. "A forensic autopsy has been ordered to establish the exact cause of death," the official, Yulia Ivanova, was quoted by TASS as saying.

The agency also reported, citing an unidentified law enforcement source, that a probe had been opened into the attack on Skripnichenko and his death.

’You Can’t Fight Them’

Fellow activists described Skripnichenko, known to friends as Vanya, as kind and caring. "Not aggressive in the slightest," Lugovykh said. "He was a sweet and interesting man."

Andrei Margulev, the activist who disclosed Skripnichenko’s death to the public in an August 24 tweet, described him as "a very pleasant, charming, kind-hearted person."

"He would always arrive for his duty with small pies or other food and offer it to everyone," Margulev told RFE/RL. "He was very dedicated to whatever he committed to."

Sergei Kireyev, a Nemtsov-memorial activist who spoke to Skripnichenko in detail about the attack, told RFE/RL’s Russian Service that the assailant, who was accompanied by a woman, "started behaving aggressively, and pulled off Vanya’s hat and threw it onto the stairs."

"Vanya picked up the hat, turned. And here, he punched him in the face," Kireyev said, adding that the assailant was much larger than Skripnichenko.

Kireyev said that Skripnichenko was a good boxer. "Even so, this blow caught him off-guard. And also there was the difference in weights. In short, Vanya ended up on the ground, bleeding," he said.

Olga Skripnichenko told RFE/RL that her husband of nearly three years always stressed the importance of not giving in to those attempting to provoke violence with the memorial’s guardians.

"Vanya knew that that you can’t fight them," she said.