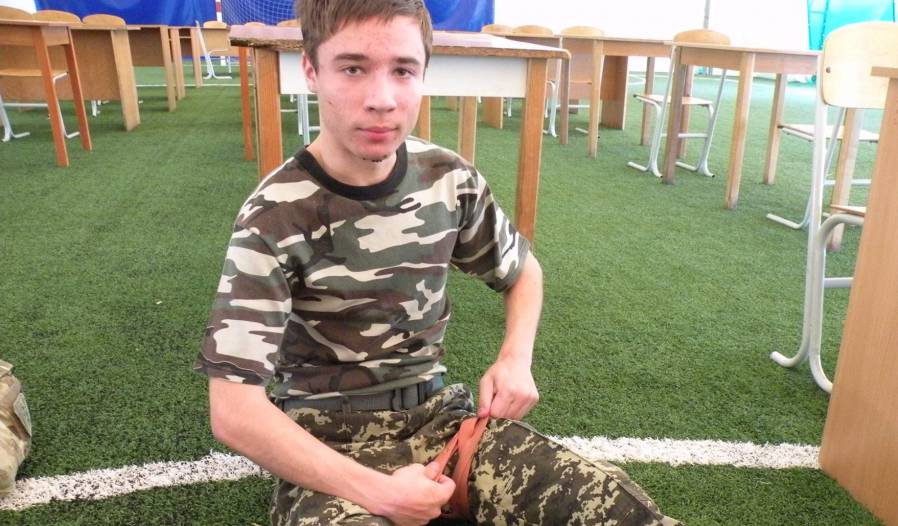 19-year-old Pavlo Hryb has not been seen since he arrived in Gomel, Belarus on August 24 and his father believes he may have been tricked into entering Belarus and then abducted by the Russian FSB.  Pavlo’s father  is a former border guard and has been told through unofficial channels that there is no record of his son having crossed the border.  Since he knows that he did cross into Belarus, this has only fuelled his concern, for which there are also other grounds. ,

The 19-year-old had corresponded with a young woman he knows only from conversations on the social network VKontakte and Skype.  According to Ihor Hryb, it was she who asked his son to come “to a meeting from the Russian Federation”. He was supposed to return the same day, but instead simply vanished.  His father initially tried to find out himself what had happened, and has spoken to the driver of the coach on which Pavlo arrived in Gomel.  Since the latter confirms that his son was on the coach, it is highly suspicious that the border guards assert that he is not on their database as having crossed the border.

Even more disturbingly, he was told in Gomel that his son had been placed on the wanted list by the Krasnodar region’s FSB, supposedly on charges of terrorism.

Since then a Ukrainian TV station has managed to speak with the young woman.  If what she says is true, then the Krasnodar FSB really are attempting to concoct a terrorist plot and charge Pavlo Hryb, who has only once before been abroad, to Belarus with his mother when he was 14.  The girl is 17 and calls herself a Ukrainian nationalist.  She told the Ukrainian journalist that she was blackmailed by the FSB.  She is facing the same ‘terrorism’ charges, but was told that she would be allowed to go to Ukraine if she could lure Pavlo to Belarus.  She claims that the young man knew about this.

Ihor Hryb is convinced that if he was not detained at the border crossing, as he should have been if he was on any wanted list, this means that his son has been the victim of a special operation.  This was probably run by the FSB, with Belarus simply going along with this as part of their agreement on cooperation.  That is the reason why the border guards are lying to him about the border crossing, and he believes that the FSB has used the girl to lure him into territory where they could detain him unimpeded.

The young man has disability status and needs to take medication all the time.  For this reason, he could not take part in the military action in Donbas, however his openly expressed views in support of Euromaidan and against Russia as military aggressor in Ukraine could, his father fears, have made the FSB target him for their latest provocation.

Ihor Hryb has asked people to pray for his son’s safe return and to share his information widely so that others do not repeat his son’s mistake.

If this really is what has happened, it is all the more worrying that Belarus must now also be considered a country where Ukrainians could be in danger.

It has certainly been clear since the beginning of Russia’s open military invasion and aggression that any Ukrainian could be at risk in Russian-occupied Crimea or in Russia.

Two Ukrainians have been imprisoned in Russia since 2014 after probably being tricked into entering either Russian-control Crimea or Russia, and several others have since been seized by the FSB in Crimea or crossing into it.

34-year-old Valentyn Vyhivsky was seized at Simferopol railway station on 17 September 2014 by armed paramilitaries who handed him to the FSB.  He was taken against his will to Russia where he was held incommunicado for eight months, without a proper lawyer or contact either with the Ukrainian consul or his family.  It remains entirely unclear what the ‘espionage’ that he was secretly convicted of actually entailed.  It is not even guaranteed that there were genuine charges, with total secrecy, the use of torture and lack of real legal defence making it impossible to tell.

Stanislav Klykh was seized in the Oryol oblast of Russia in August 2014.  The Kyiv historian had gone there, he thought, to see a woman he had met the previous year in Crimea.  It is likely that this was a trap since the woman has not been heard from since.  Klykh himself was seized by the FSB and held totally incommunicado for ten months.  During that time, he was tortured and given psychotropic drugs to extract ‘confessions’.  There is some hard medical evidence to prove the torture, but there is also the fact that without torture, it is simply impossible to understand how Klykh, and nationalist politician Mykola Karpyuk (held incommunicado for 18 months) could have ‘confessed’ to entirely fictitious crimes supposedly committed in 1994/95 in Chechnya together with a number of prominent Ukrainian politicians.

These are just two of a much larger number of prisoners Russia is holding on overtly falsified charges.  It can only be hoped that Pavlo Hryb has not become the latest victim.