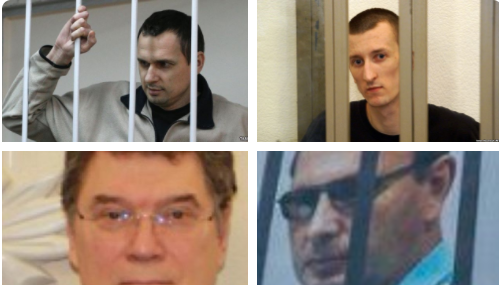 Solidarity events have been taking place over the last week to mark the second anniversary on August 25 of the sentences passed by a Russian ‘court’ on Ukrainian filmmaker Oleg Sentsov and civic activist Oleksandr Kolchenko.  The events are important to ensure that the two political prisoners, whom Russia has hidden as far away from the media and foreign diplomats as is possible, are not forgotten.  It is also an opportunity to remember the three Russian ‘judges’ – Sergei Arkadyevich Mikhailyuk, Viacheslav Alexeevich  Korsakov and Edward Vasilyevich Korobenko –  who knowingly sentenced two innocent men to 20 and 10 years, respectively.

There can be no question that they did not know.  The ‘trial’ had been followed with concern and condemnation far beyond Russia, and the renowned Memorial Human Rights Centre declared both men political prisoners soon after it began.

There was literally nothing to incriminate Sentsov and the one act that Kolchenko freely admitted taking part in was something that would normally get at very most a suspended sentence for hooliganism.

It is no justification, but at least during the Soviet Terror of 1937, the prosecutors, judges, etc. who took part in the torture and execution of innocent men were aware that they would pay with their lives for insubordination.  The ‘judges’, the ‘chief investigator’ Artem Burdin, prosecutor Igor Tkachenko and others who took part in this first stage in the ‘ideological terror’ unleashed since Russia’s invasion of Crimea lack even that pitiful excuse.  Burdin, a 54-year-old Russian, is the so-called senior investigator on ‘particularly important cases’ within the FSB [Russian security service] and is believed to have given the orders for Sentsov, Kolchenko and two other opponents of annexation to be tortured. He and Tkachenko might have missed out on promotion or fat bonuses had they refused to take part in the repression, no more than that.

Four FSB officers - Alexander Kulabukhov;  Sergei Markov; Dmitry Vasilkov and Alexander Zinchenko have been identified  as directly involved in the arrest and torture of, at least, Oleg Sentsov.  All four are former officers of the Ukrainian Security Service [SBU] and are, or until recently were, Ukrainian nationals.

A model letter to parliamentary representatives asking for all those implicated in the torture, trial and imprisonment of Sentsov and Kolchenko to be added to current sanctions lists can be found here.

Russia’s first Crimean show trial is indeed only the first, and it is for this reason too that it is vital that all those complicit in the persecution of innocent men know that their actions will be recorded and bring consequences.

It is telling that the occupation regime has taken to holding all the detention hearings, appeals, etc. of the 15 Crimean Muslims it is holding in indefinite custody behind closed doors.  Judge Marina Vladimirovna Kolotsei who on August 9 sentenced Server Karametov, a frail and ill 76-year-old Crimean Tatar to 15 days’ imprisonment for his defence of political prisoners, tried desperately to ensure that nobody used cameras or videos.

She and numerous other ‘judges’ handing down repressive sentences to order have a great deal to hide.  It is important that we prevent them from doing so.

Sentsov, Kolchenko and two other opponents of Russian annexation - Gennady Afanasyev and Oleksiy Chyrniy – were seized by the Russian FSB in May 2014.  They were held incommunicado for three weeks, first in Crimea, then in Moscow, before any lawyer was allowed to see them.  This is of critical importance since there was literally no evidence of any ‘terrorist plot’ with the entire case, and eventually Sentsov’s 20-year sentence and Kolchenko’s 10 years, based solely on the ‘confessions’ of the other two men.  Later in court, Afanasyev found the courage to refuse to obey the FSB’s orders and to stand up and state that all previous testimony had been untrue and extracted through torture.  Sentsov had, from the outset, described the torture that he was subjected to, but had withstood.

Mikhailyuk, Korsakov and  Korobenko ignored the lack not merely of evidence, but of ‘terrorism’ in the charges, and passed the sentences Sentsov had been told to expect when he refused to ‘cooperate’.

A large number of prominent Russian writers, artists, human rights defenders and others in their turned issued a warning that “The country has again taken the road of political repression”.  They directly compared the fabricated trial to the political trials of the Soviet era, and asked:

“What is this, if not ideologically motivated state terror?  The aim is to intimidate and suppress any peaceful resistance in Crimea from those who regard themselves as citizens of Ukraine and oppose Russia’s annexation of Crimea.”