Published from the Atlantic Council 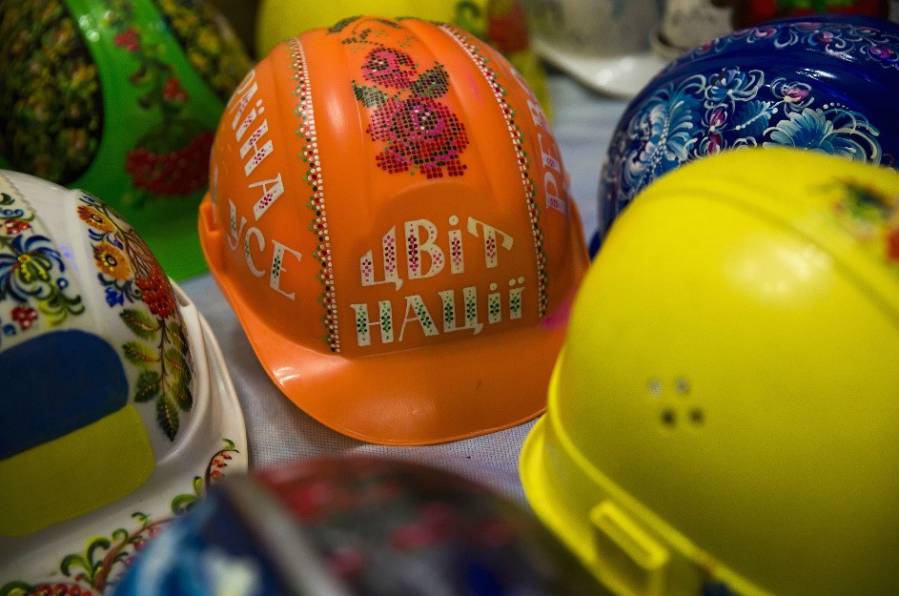 A hardhat for an anti-government protester painted the words ’Pride of the Nation,’ is seen on display at the Kyiv City Hall, which has been occupied by opposition forces, February 1, 2014. Anatoly Kravets, the coordinator of an impromptu art project asking protesters to adorn the hardhats they used to protect themselves during street battles with riot police, said the variety of motives reflect the diversity of Ukrainians who have joined on the movement around Kyiv’s Independence Square. "Those helmets have become the symbol of our revolution, they are the symbol of the peaceful coming together of our nation. They protect us and their colorful appearance contrasts nicely the black uniformity of police helmets," he said. REUTERS/Thomas Peter

Ukraine now boasts a new layer of democratic paint, but the old oligarchic colors are peeking through. Three years after Petro Poroshenko assumed the presidency, numerous experts warn that a counter-revolution is on the horizon and that Ukraine may slide back to authoritarianism.

How could Ukraine end up here again? Is the country’s energetic civil society still capable of keeping the government in check? The Orange Revolution provides a cautionary tale for the risks of a failed revolution and a map of the pitfalls to avoid.

What went wrong after the Orange Revolution?

The West hailed the Orange Revolution as a triumph of Ukraine’s civil society. For the first time in Ukraine’s history, Freedom House rated the country as “free” in 2007.

Activism mushroomed between the Orange Revolution and the Euromaidan: the number of officially registered NGOs grew from 40,000 in 2004 to almost 80,000 by 2014, but this growth was deceptive since only 8-9 percent of them were active. By 2011, only 29.9 percent of Ukrainians could name a single NGO in their town or village, while 85.2 percent had never participated in any voluntary activity. On the eve of the Euromaidan, NGO leaders characterizedtheir organizations as “mostly ineffective” in addressing policy issues.

After the Orange Revolution, civil society mistakenly presumed there could be no backsliding. Activists spent too much time at international conferences instead of town hall meetings. Western donors, not local independent advisory boards, judged NGOs’ effectiveness and impact. The leaders of elitist NGOs were busy networking with Western embassies, rather than engaging their fellow citizens. As a result, the revolution barely got started. Civil society’s lack of vigilance and inability to hold the Yushchenko-Tymoshenko government accountable led to disillusionment with Orange leaders and the victory of revanchist forces in the 2006 parliamentary and 2010 presidential elections.

Civil society after the Euromaidan: What went right?

Ukraine paid a high price to restore its democracy in 2013. The scope of innovation and civic engagement at the Euromadan was truly unprecedented. There are at least four areas where civil society achieved strong results:

1. Ukraine experienced a remarkable growth of nationwide volunteer groups that provide humanitarian support and social assistance to the victims of the war in Donbas and other populations at risk. Volunteers are now the most trusted group in Ukraine.

3. Anticorruption initiatives became much more systemic and institutionalized. NGOs continuously monitored the process of constructing two major anticorruption agencies, the National Anti-Corruption Bureau of Ukraine (NABU) and the National Agency for the Prevention of Corruption (NAPC). Under public pressure, the government launched a publicly available online system for tracking the declared assets of politicians, civil servants, and judges.

The human toll of the Euromaidan was so high that most find the current cynical restoration of the old system incomprehensible. As Novoe Vremya editor Vitaliy Sych wrote: “I thought that after the killing of 100 people on the Maidan, after the deaths of thousands of people in the east, Ukraine would never be the same...[b]ut we still witness corruption, schemes, and political deals at the highest level.” Ukraine’s political class patiently waited for the revolutionary fervor to pass before starting its “sweet counter-revolution.”

One of the first warning lights should have been the “business as usual” approach of Ukraine’s NGO community. While volunteers emerged as the most trusted group after the Euromaidan, NGO leaders continued to prioritize relations with Western donors instead of engaging volunteers and citizens.

Some NGOs resumed working with financial elites. Ihor Kolomoisky, Viktor Pinchuk, and other oligarchs started employing financial, media, and political resources to promote various activists and NGOs. The oligarchs predicted, correctly, that their support would buy a certain amount of influence and protection.

In many ways the cultural codes of Ukraine’s top NGOs mirror the patron-client nature of the country’s oligarchic power structures: many Kyiv-based NGOs operate in an opaque network of people who have been friends for a long time, who have a long history of cooperating with one another, and who built clientelistic networks either with government representatives or international donors.

Consider the Reanimation Package of Reforms (RPR) group. The largest reform network, RPR is comprised of eighty NGOs, twenty-two reform groups, and 300 experts who develop, promote, and implement judicial, anticorruption, and economic legislation. Donors rewarded RPR for its effectiveness and success in advocating post-Euromaidan reforms. From 2015-17, it received millions of dollars in support from Ukraine’s key donors. Although RPR is officially comprised of eighty NGOs, all Western funding has been channeled through a select group of NGOs—such as the Center for Democracy and Rule of Law (more than 70 percent of total funding), Centre UA, and the Ukrainian Center for Independent Political Research—all of which were already longtime recipients of foreign aid.

The funding flow not only created conflict between recipient and non-recipient groups, it created something of a “warm bath” effect for the recipients. RPR focused on donor reports and grant applications, rather than sustaining and growing citizen participation. RPR’s office, opened in 2014 with zero donor funding, looked like a beehive of civic activism. Today, the drive is gone and bureaucracy prevails over innovation.

Over time, activists started leaving the network. As Viktor Griza, a former member of RPR’s group on cultural reform, told me: “RPR grew into a club of beneficiaries [vygodopoluchateli]. Many RPR activists only use the RPR ‘brand’ to boost their personal capital—to meet foreign diplomats, get media opportunities, get invited to international conferences, or win prestigious fellowships in the United States. For some, RPR is a ticket to power corridors, where they can make friends with government officials or politicians and maybe get elected to the Verkhovna Rada during the next election.”

The stagnation in Ukraine’s NGO community was matched only by the ambition of many civic leaders to take advantage of their newfound influence. In 2013 authorities were forced to reckon with activist power and cooperate with its leaders on reforms. This opened a window of opportunity for Euromaidan leaders to go into politics, and many converted their standing into attractive parliamentary or governmental positions. As a consequence, the leaders on the street failed to form a united political force to run for parliament in 2015. Instead, they allowed the country’s old elites to split their ranks and co-opt them into different parties.

The unraveling of the Euromaidan spirit through NGO stagnation and activist ambition helped open the door for Ukraine’s oligarchs to regain their influence. To win back the revolution, the veterans of Euromaidan must offer a clear reform plan.

Winning the revolution will take more than winning the Maidan. To win the Maidan, it was sufficient to marshal popular support against the massive corruption of the Yanukovych administration and stand for “European values,” without providing many specifics. After the new government took power, the effectiveness of anticorruption as a rallying platform declined. A wave of nationwide anticorruption forums that Mikheil Saakasvili, the Democratic Alliance party, and other activists organized failed to pay dividends with the electorate.

The problem is simple: Ukrainians know what civil society activists are against, but they are unaware of what they stand for. Yanukovych is gone, and the signing of the Ukraine-EU Association Agreement and adoption of the EU visa liberalization regime are achievements largely seen as success stories of Poroshenko’s presidency. To succeed, NGOs and reformers must not only tackle corruption, but also offer specifics policies on healthcare, education, culture, and social security. At the moment, these are the areas where they have almost nothing to offer.

Yet the first step for Ukraine’s pro-democracy activists and groups is to renew their focus on honesty and integrity, and stand for those principles in full public view. For example, many activists and public intellectuals think that criticism of the government automatically undermines Ukraine’s international standing and weakens its position vis-à-vis Russia. But reforms that do nothing to build Ukraine’s rule of law do not deserve defending. Ukraine’s war in the east is no excuse for its leaders to assault activists, silence investigative journalists, or harass reformers. It is dishonest to extoll Ukraine for protecting European values against Vladimir Putin’s aggression if Ukraine’s political leaders smash these values at home.

The reformers are slowly losing the positions they achieved at the height of their influence. The National Reform Council (NRC), which originally had four civil society representatives, is now comprised solely of presidential loyalists. The most recent additions include MP Iryna Lutsenko, the prosecutor general’s wife, and Artur Herasymov, the leader of Poroshenko’s parliamentary bloc in the Rada. Elsewhere in government, at least twenty-two top reformers were forced out in 2016. MPs Svitlana Zalishchuk and Mustafa Nayem were kicked out of Ukraine’s parliamentary delegation to the Council of Europe. They were replaced by an ally of former President Yanukovych, a move met with little outcry from civil society.

Poroshenko established a new state agency, the Civil Society Coordination Council, to serve as a mediator between the state and civil society. Tellingly, it is modeled on a similar body established by Viktor Yanukovych in December 2012. The Council is led by two state officials, not an independent civil society leader. So far, the Council has done little to represent the interests of civil society.

Yet if the Council lacks in effectiveness, it is not short on civic star power. Several prominent figures, like Yevhen Bystrytskyi, director of the International Renaissance Foundation, serve as members. But by participating in the state’s game of sham reforms and ignoring its abuses, reformers “turn into back-up dancers in the government’s starlight ritual dance with the Civil Society Council to demonstrate its pseudo engagement in the reform process,” said Bohdan Maslych, director of the oldest civil society information and support center, GURT.

Ukraine’s civic leaders need to shed their timidity in standing up to, or resigning from, the current government and its “Potemkin village” civil society councils.

Civil society undoubtedly faces serious challenges. Poroshenko is busy reconstructing his power vertical before the 2019 elections. The EU and United States are busy with their own priorities, and a return of “Ukraine fatigue” and declining assistance is a real possibility. The oligarchs are more than ready to lead again and Moscow’s capacity to escalate the military conflict in Donbas is not remotely diminished under Western sanctions. The combination of a weakening economy and endless war is paving the road for populists and hardline nationalists.

To win this revolution, reformers must move beyond street victories and pursue victory in town halls and elections. It is long past time to leave the comfort zone of the “semi-opposition.” It’s time to unite and stand up for dignity once again.