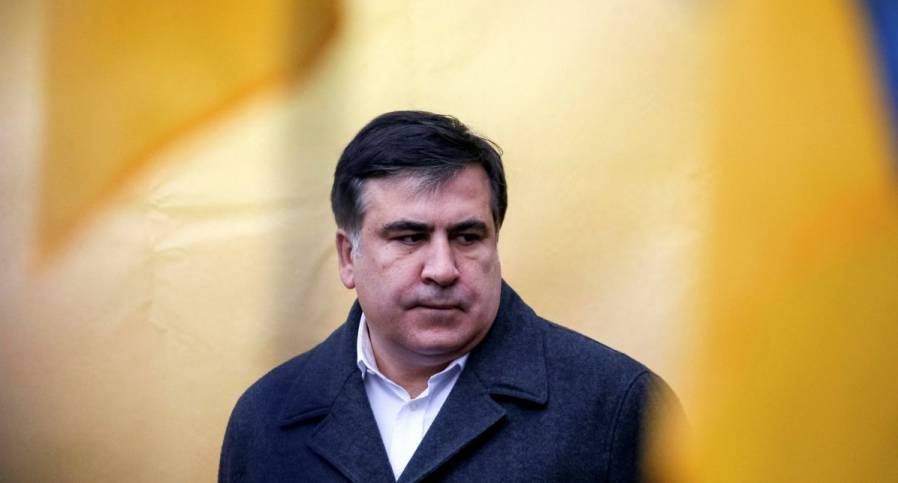 It is no accident that all reports of the detention by Ukrainian enforcement officers of David Saakashvili show photos of his brother, the former Georgian President whom Ukraine has unlawfully stripped of his Ukrainian citizenship.  The grounds cited for his detention on September 2 seem questionable, and the timing significant since Mikheil Saakashvili has said that he plans to return to Ukraine in just over a week.  His announced attempt to enter Ukraine on September 10 would certainly be a challenge to the country’s leaders and Mikheil Saakashvili has already said that he sees his brother’s detention as aimed at deterring him from returning.

The official reason for David Saakashvili’s detention on Saturday morning, as given by Interior Ministry spokesperson Artem Shevchenko, is that he was in Ukraine illegally.  His residency permit had supposedly been revoked back in March this year after his work permit was cancelled.  David Saakashvili is a lawyer resident in Kyiv and if there are grounds for changing this status and expelling him from the country, they seem disturbingly unclear.  Shevchenko has said that David Saakashvili is now held by the Migration Service, with a decision being taken on his deportation and an administrative fine for this supposed infringement of migration legislation.

Mikheil Saakashvili reported that his brother had been detained by 8 Interior Ministry officials early on Saturday as he left the house.  He warns that if the move is aimed at influencing him to not return, they have miscalculated. “This has still further strengthened my resolve to defend Ukraine and Ukrainians from oligarchs and their lawlessness”

He further claims that mobile groups have been sent from Kyiv to all western border crossings because they don’t trust local border guards to not let him enter the country.

This latest measures against David Saakashvili can only heighten concerns about the removal of his brother’s citizenship and the growing number of such cases of selective application of rules on citizenship.

Although Mikheil Saakashvili is not the first person to have had citizenship revoked, his case is by the far the most shocking, as it has turned the former Georgian President, who later because  Governor of Ukraine’s Odesa Oblast, into a stateless person.

As reported, the news that Mikheil Saakashvili had been stripped of his Ukrainian citizenship came on July 26, when he was in the United States.  The reason given was that he had concealed criminal proceedings against him in his native Georgia.

The pretext was viewed with scepticism from the outset.  Saakashvili had been ceremoniously granted Ukrainian citizenship by President Petro Poroshenko back in May 2015 when it was open knowledge that the new government in Georgia was accusing him of abuse of power.

Saakashvili has himself denied filling out the forms that allegedly ‘concealed’ this fact that was widely known, and says that the signature shown is not his.

There were other concerns at the time.  It was claimed that Poroshenko had signed the decree to strip Saakashvili of his citizenship on the basis of a decision from the Committee on Citizenship.  On July 24, two days before the move, Poroshenko had signed another degree changing the makeup of that committee.

All of this is of major concern, and few in Ukraine or abroad took the official reasons given very seriously.  Saakashvili was widely reported in the western media as a former Poroshenko ally who had turned into one of his fiercest critics.  Reuters, for example, mentioned that Saakashvili had formed a party “in opposition to Poroshenko, whom he accused of allowing corruption to flourish”, and that he was calling for early elections.

It is also no accident that in criticizing the action, outspoken MP Mustafa Nayyem said that the only more stupid thing done by a Ukrainian President was Viktor Yanukovych’s imprisonment of his main rival, Yulia Tymoshenko.

There has also been strong criticism of the move from a human rights point of view.  Yevhen Zakharov, Director of the Kharkiv Human Rights Protection Group, has pointed to clear grounds for concluding that the move was in breach of Ukraine’s Constitution.  This states quite unambiguously that “A citizen of Ukraine shall not be deprived of citizenship and of the right to change citizenship” (Article 25 § 1).  While the President’s powers do indeed including “adopting decisions on the acceptance for citizenship of Ukraine and the termination of citizenship of Ukraine, and on the granting of asylum in Ukraine” (Article 106 § 26), this does not give him the right to arbitrarily strip a person of his citizenship against the individual’s will.

Ukraine’s Law on Citizenship expressly prohibits any such move if it would result in the individual becoming stateless, and this is precisely what has happened here.  It was, in fact, Georgia that stripped Saakashvili of his Georgian citizenship, but Poroshenko knew that with his decree he was taking away the only citizenship that Saakashvili had.

He was doubtless aware of this, since there have been two other disturbing cases this year where the President has stripped people of their citizenship, claiming this to be because they are citizens of another state as well.  Ukraine does indeed prohibit dual citizenship, however there are very large numbers of people, including in parliament, who have this, and the move against Andriy Artemenko and Sasha Borovik was also viewed as dangerously selective.