Russian children sing of their readiness to die if called upon by PutinProsecutor refuses to investigate key suspect in murder of Roma leader in Kharkiv oblast Russia indoctrinates children to want ‘to defend’ occupied Crimea against Ukraine Crimean children taught that Russia didn’t invade Crimea and that Ukraine was an accidentRussia instils ‘patriotism’ in occupied Crimea with automatic rifles and propaganda140 Crimeans sentenced for refusing to serve in the Russian occupiers’ armyRussian proxy Donetsk ‘republic’ tries to eliminate use of Ukrainian passportsFatal attack on the Vilshany Roma community reaches the court, but not as a hate crimePutin’s law aims to educate ‘patriots of Russia’ and eliminate Ukrainian identity in occupied CrimeaOver 100 Crimeans prosecuted for rejecting military service in Russian occupiers’ armyUkrainian language removed from schools in Russian proxy Luhansk ‘republic’Donbas children deployed as weapons in Russia’s hybrid warfare against UkraineCrimean children trained to want to fight for Russia and forget they’re UkrainianRussia spends millions on indoctrination and crushing children’s identification with Ukraine in occupied CrimeaRussia deploys ‘Cossacks’ as thugs and ‘witnesses’ in politically-motivated prosecutions in occupied CrimeaUN states tell Russia to ends its militarization of Crimea and get outRussia’s militarization of childhood hits new low in occupied Crimea1500 Crimean children recruited into Russian occupiers’ ‘youth army’ in CrimeaHome at last! 24 POWs and 11 political prisoners, including Oleg Sentsov arrive in KyivPutin claims release of Russia’s most tortured Ukrainian political prisoners is a ‘special issue’
• Topics / Victims of political repression
• Topics / News from the CIS countries 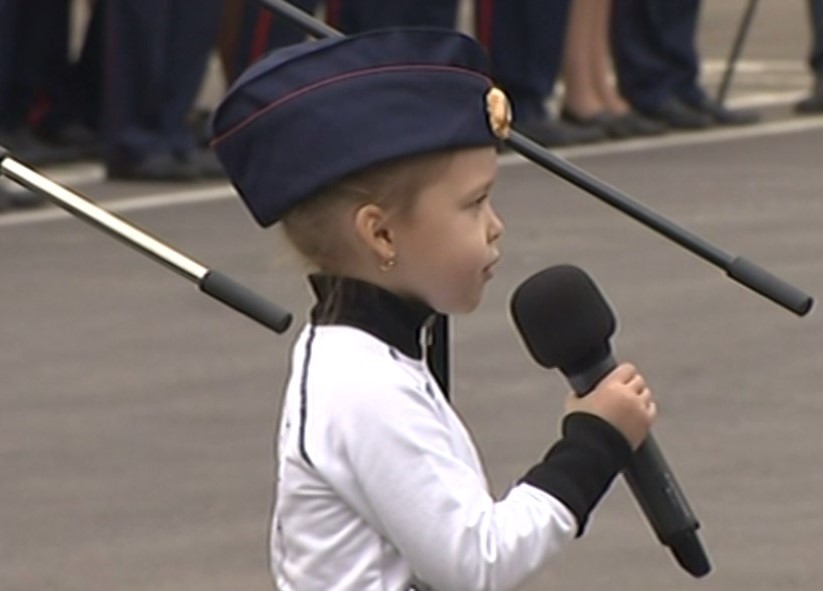 At a ceremony in St Petersburg on September 1 marking the beginning of the academic year for future ‘investigators’, a little girl solemnly promised Alexander Bastrykin, head of the Investigative Committee that she would shop her mother if that were required by her work.  Bastrykin responded by embracing her and kissing her hand, while young boys a little older than Diana promised that they would make sure that she joined the investigators’ ranks after leaving kindergarten.

It is unlikely that little Diana fully understood the verse that she had been taught to recite in which she first speaks of knowing how to keep secrets, and then goes on to talk about holding her mother to answer if this were required.

Somebody, however, came up with it and decided it was an appropriate verse for a small child to learn off by heart.

Children as mouthpieces and victims of propaganda

The verse must inevitably elicit associations with Pavlik Morozov, the 13-year-old lad who, according to the Soviet legend, was such a good communist that he denounced his own father in 1932.  He was then killed by other relatives and made into an official martyr.

This is not the first such verse that indicates where Russia has come in the seventeen years since Vladimir Putin first became President.  At a concert on February 23, 2017, to mark the Day of the Defender of the Fatherland, a young member of Putin’s ‘Youth Army’ recited a verse that said “I would learn German simply because it’s a language which Putin spoke in”.

The worst militarization involving children has been seen in Crimea since Russia’s invasion and annexation.  During official Russian festivities in Sevastopol on the third anniversary of annexation,  there was a choreographed item in which girls sing: “My country, my fate, my dream, my war”.  At that point, other children burst onto the stage waving mock machine guns around, with a culminating point seemingly the girls prancing about with Russian flags.

The propaganda coating around the event on September 1 in St Petersburg seems especially inappropriate given the nature of many of the ‘investigations’ carried out by Bastrykin’s Investigative Committee since early 2014.

In September 2015, Bastrykin gave an interview to an official Russian newspaper in which he made extraordinary assertions about the then Ukrainian Prime Minister Arseny Yatsenyuk and other prominent Ukrainian politicians.  They were supposed to have fought in Chechnya 20 years ago, and committed terrible atrocities.

It became clear that the allegations, which later resulted in Russia seriously trying to get Interpol to issue a red notice on Yatsenyuk were all based on the ‘confessions’ of three Ukrainians.  Oleksandr Malofeyev was already serving a 23-year sentence in a Russian jail, and was easily pressured by threatening to take away life-saving medication.

The other two men – Stanislav Klykh and Mykola Karpyuk – had been effectively abducted and held incommunicado for 10 and 18 months respectively.  Both retracted the confessions as soon as they finally gained access to proper lawyers, and their applications are already with the European Court of Human Rights.

This is not just a question of their word against the Investigative Committee’s.  The renowned Memorial Human Rights Centre analysed the indictment and found it lacking any basis in fact.  The only possible explanation for why two men should have confessed to heinous crimes that never happened, and said that Yatsenyuk and others were accomplices was that given by both men, namely that they had been subjected to ongoing unendurable torture.

It is inconceivable that Bastrykin was not aware of this, yet a grotesque trial resulted in Karpyuk being sentenced to 22.5 years’ imprisonment and Klykh – to 20 years.

Politically-motivated trials of Ukrainians have been a part of Russia’s propaganda offensive against Ukraine, and the Investigative Committee and FSB have both cooperated closely with the state-controlled media.

Many ‘confessions’ were televised and shown widely.  One such ‘confession’ to heinous war crimes in Donbas was given by Serhiy Lytvynov, a cowherd from the Luhansk oblast

Thanks to the late Viktor Parshutkin and human rights activists, it was proven that the women and children whom Lytvynov had ‘confessed’ to raping and murdering had never existed, with even the addresses being fictitious.

The Investigative Committee, having held Lytvynov in custody for over a year, had no intention of letting him go.  They came up with another story that was also wildly implausible and got him sentenced to eight and a half years (details here).

The list merely of Ukrainian victims of such ‘criminal investigations’ is long, and, while less overtly political, there is nothing to suggest that the methods the ‘investigators’ use in cases involving Russians are any better.