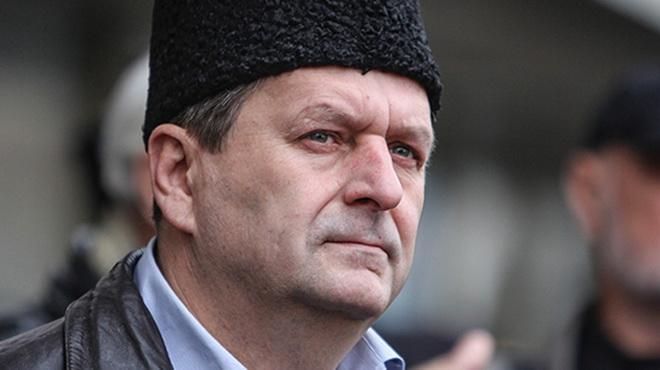 Russia has sentenced Crimean Tatar leader Akhtem Chiygoz to eight years’ imprisonment  for upholding Ukraine’s territorial sovereignty during a demonstration that took place on Ukrainian territory and under Ukrainian law.  Chiygoz’s imprisonment since January 29, 2015 and this ‘trial’ are therefore demonstrations of the most cynical legal nihilism, in which Russia is even in breach of its own criminal code.

All of this was ignored by the three ‘judges’ of the Russian-controlled High Court in Simferopol: Viktor Ivanovych Zinkov (presiding), Igor Igorevich Kryuchkov and Alexei Viktorovich Kozyrev.  Typically Zinkov and Kryuchkov, like the de facto prosecutor Anastasia Supryaga themselves betrayed their oath to Ukraine back in 2014 and have now executed a political order to punish the Deputy Head of the Crimean Tatar Mejlis for defending Ukraine’s territorial integrity and preventing Russia and pro-Russian activists from changing Crimea’s status without Russia’s open invasion.

As reported earlier, there are very strong grounds for seeing this ‘trial’ and shocking sentence as Russia’s revenge against Chiygoz and the Crimean Tatar Mejlis who played such a major role in thwarting Russian President Vladimir Putin’s plan.

In his final address to the court (which he was illegally forced to give from the SIZO or remand prison where he is imprisoned), Chiygoz said that he and other Crimean Tatars were on trial for upholding the law and for defending Ukraine’s territorial integrity, with Russia’s prosecution carried out by people who had themselves turned traitors.

He was clear, not only of a ‘guilty’ verdict and prison sentence, but also that this was “a sentence directed against the entire Crimean Tatar people on behalf of the Russian Federation which has occupied my Homeland”.

In his final words, Chiygoz spoke of the demonstration which has formed the pretext for his sentence.

The demonstration took place on February 26, 2014, before Russia’s invasion and annexation of Crimea and, as mentioned, there can be no question, even according to Russian law, that it falls under Russian jurisdiction.

There were two demonstrations that day which largely coincided in time and space.  One was organized by the Mejlis, with around 10 thousand Crimean Tatars, Euromaidan activists and other Ukrainians gathering to block any attempt by parliament to push through a change in Crimea’s status.  The Russian Unity party, led by Sergei Aksyonov organized a counter-demonstration, with around 4 thousand pro-Russian demonstrators.

The demonstration prevented this so-called ‘extraordinary session’, and by early the following morning, Russian soldiers had seized control. Several hours later, a ‘parliamentary session’ was forced through by the soldiers without insignia but with very real Kalashnikov rifles, and Aksyonov was installed as ‘leader’.

Under Russian occupation too, Crimean Tatars and other Ukrainians have, despite all the abductions and killings, the searches, arrests, bans on remembrance, the huge fines for the least demonstration of civic activism, continued to fulfil their civic duty.”

Chiygoz said that it was this that drove the occupation authorities crazy and that prompted them to stage judicial farces against innocent people.  The so-called ‘26 February 2014 case’, he suggested, was aimed at intimidating the Crimean Tatar people, crushing and minimizing their activeness in defending their rights, their support for Ukraine and their refusal to recognize the illegal annexation of Crimea.

“The incidents that took place on Feb 26, 2014 at a peaceful demonstration announced by the Mejlis of the Crimean Tatar people, were provoked by individuals who played a part in the subsequent military occupation of Crimea.  They are thus prosecuting not those who were traitors, who had aims and intentions aimed at changing Ukraine’s territorial integrity, who later abducted and murdered people.  Instead they are putting those who upheld the laws of the land, international norms and rules on trial.”

The invading country has, without any right to it, staged this judicial travesty, and Chiygoz was in no doubt about the true aims of those who had commissioned this trial.

He had no grounds for expecting the court to show objectivity and independence.

He was, tragically, correct.  ‘Prosecutor’ Anastasia Supryaga, and ‘judges’ Viktor Zinkov, Igor Kryuchkov and Alexei Kozyrev did not merely continue a judicial farce that should have been terminated immediately.  They also openly ignored the lack of any evidence for the charges, and the overtly discriminatory, anti-Crimean Tatar, nature of this lawless prosecution (details to follow, but many can be found here).