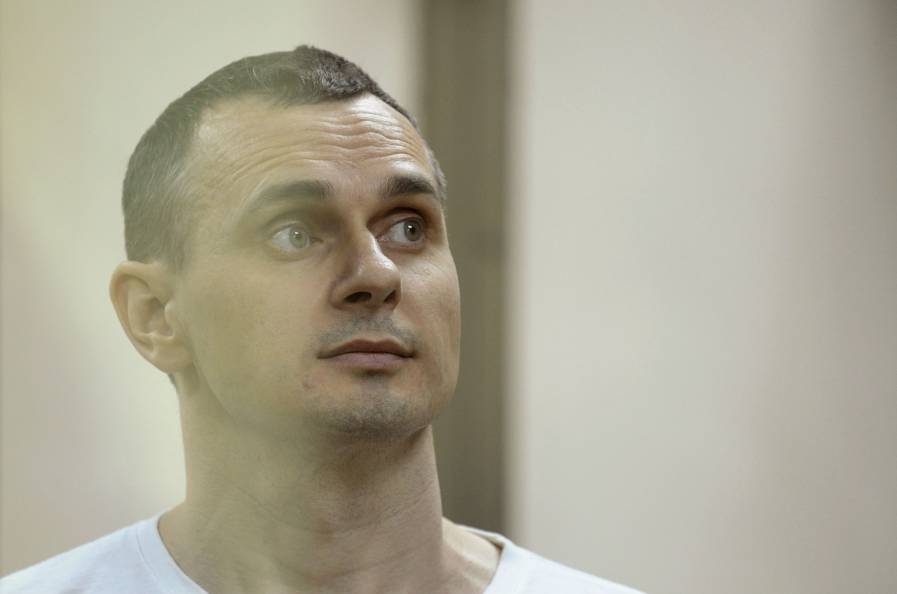 Ukrainian filmmaker Oleg Sentsov, whom Russia is illegally holding prisoner, has once again been moved only a week after arriving at the notorious Irkutsk SIZO [remand prison].  His lawyer Dmitry Dinze has no idea where he has been taken, nor why.  While the hope must arise that this is in preparation for his release, perhaps as part of an exchange, other more cynical ploys seem at least as likely.

The process of moving political or other prisoners by special trains through Russia is extremely long and gruelling.  It is also dangerous since lawyers and human rights monitors are deprived of any contact with the men, who can be subjected to illegal forms of physical or psychological pressure.  Oleg Sentsov withstood terrible torture when arrested by the FSB in May 2014 and remained unyielding both then and later, so it seems extremely unlikely that they are hoping to break him now.

HRO.org reports that some legal specialists believe that the reason may lie in a recent European Court of Human Rights judgement and the fear of the massive compensation likely to be awarded Sentsov as a consequence. The further a person is held from his home and family, the larger the compensation due, and Russia has made every effort to send Sentsov as far away from both his family, and from the media and foreign diplomats as it could.  If this is the explanation, however, then Sentsov would certainly not be the only Ukrainian prisoner who should be moved.

The reports of Oleg Sentsov being moved have coincided with an eight-year sentence, also for nothing, against Crimean Tatar leader Akhtem Chiygoz.  While the hope of an exchange being planned cannot be excluded, Moscow may also be simply trying to deflect attention from the new act of repression.

Calls for the release of Oleg Sentsov and civic activist Oleksandr Kolchenko have been made by all international bodies and democratic countries since their arrest, together with that of two other opponents of Russia’s annexation of Crimea, in May 2014.  The charges against Sentsov  – of ‘masterminding a terrorist plot’ were based entirely on the testimony of two of the other men – Gennady Afanasyev and Oleksiy Chyrniy, obtained while the men were held incommunicado and without access to a lawyer.  Afanasyev retracted his testimony during the trial of Sentsov and Kolchenko, saying that it had been obtained through torture.

There was no ‘terrorism’ in the two Molotov cocktail attacks on the empty offices of pro-Russian organizations which had played a major role in helping Russia annex Crimea, and there was no proof that Sentsov had even known about them.

Sentsov had, from the outset, spoken of the torture he was subjected to, and of the threat that if he didn’t give the confessions demanded, they would ‘make him the mastermind’ and he would get 20 years.

On August 25, having indeed been charged with being the mastermind of a ‘terrorist plot’ that was never proven, he was sentenced by three Russian ‘judges’: Sergei Arkadyevich Mikhailyuk, Viacheslav Alexeevich Korsakov and Edward Vasilyevich Korobenko to 20 years.  Kolchenko was sentenced to 10 years, although he had only been involved in one Molotov cocktail attack on an empty office which would normally be treated as hooliganism and get a suspended sentence at most.

Russia has consistently claimed that both men ‘automatically’ became Russian citizens, and is using this evidently illegal pretext to prevent the men from seeing the Ukrainian consul.

There has been an evident attempt to isolate the men, with Sentsov held until recently in a prison in Yakutia, in Siberia and Kolchenko in the Chelyabinsk oblast.

Oleg Sentsov has an elderly mother and two children – 14-year-old Alina and 12-year-old Vlad who have not seen their father for over three years.

It is doing so in all cases involving illegal imprisonment of Ukrainians on politically-motivated charges or on the basis of their faith.  As well as Sentsov, Kolchenko and Chyrniy (Afanasyev was released in 2016 on health grounds), Russia is also holding the ‘Sevastopol Four’ – Ruslan Zeytullaev; Ferat Saifullaev; Rustem Vaitov and Nuri (Yury) Primov - several thousand kilometres from their families. The four are Crimean Tatar Muslims who were sentenced to long periods of imprisonment for unproven involvement in the Hizb ut-Tahrir movement.  All have at least one small child whom they have not seen since early 2015.

The list of people Russia is illegally holding prisoner very far from their homes and families is much greater, and is on the increase.