Russian-occupied Crimea and Donbas close to North Korea in Freedom House rating So what will “New SBU” be?Record sentence in mounting persecution of Jehovah’s Witnesses in Russia and occupied Crimea Not just Navalny. EU sanctions needed over 18-year sentences against Crimean political prisoners Russia indoctrinates children to want ‘to defend’ occupied Crimea against Ukraine Crucial victory for Ukraine in ECHR case against Russia over Crimea A brief description of the KHPG strategic litigations in July–December 2020The practice of application of Article 111 of the Criminal Code of Ukraine80-year-old Ukrainian charged with trying to overturn the government via a Facebook repostExpert opinion (Amicus Curiae) on the application and interpretation of the case-law of the European Court of Human Rights in criminal proceeding № 52017000000000361Russia: New legislative initiatives: a threat to NGOs, freedom of assembly, education and moreCrimean children taught that Russia didn’t invade Crimea and that Ukraine was an accidentRussian legislators launch multiple hits against civil society in occupied Crimea and RussiaModel concentration camp deployed in Russia for Putin regime’s rewriting of historyRussia instils ‘patriotism’ in occupied Crimea with automatic rifles and propaganda140 Crimeans sentenced for refusing to serve in the Russian occupiers’ armyUkraine sabotages reintegration chances for students from occupied Crimea and DonbasMemet Belyalov: 18-year sentence for discussing religion in Russian-occupied CrimeaVoices for Freedom – Show Kremlin hostage Volodymyr Dudka and Russia he’s not forgottenRussian proxy Donetsk ‘republic’ tries to eliminate use of Ukrainian passports
• Topics / Children’s rights 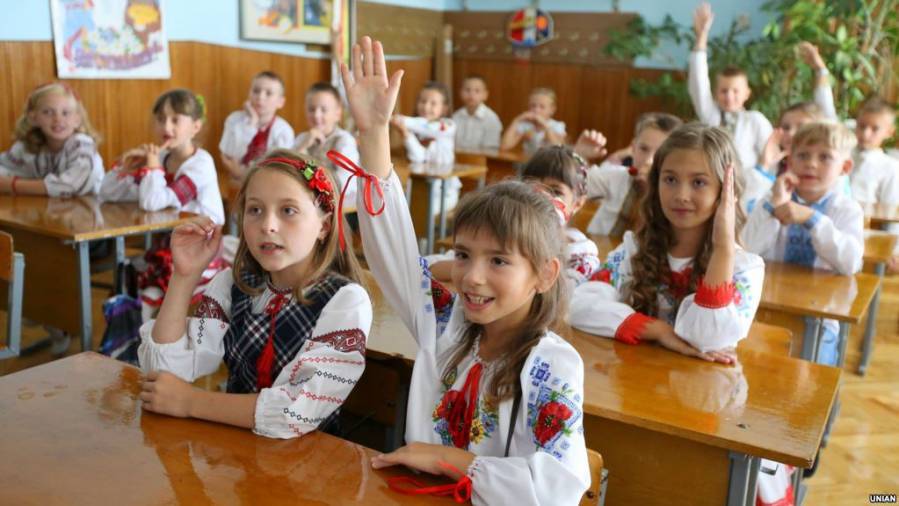 The wording of the Ukrainian legislation states that the language of instruction in the first four grades may be in a minority language. By grade five, however, only two or more subjects can be taught in any of the languages of the EU. (file photo)

Timeya Leshko doesn’t see much of a future for her four children in Ukraine, where a Moscow-backed conflict still flares up in the east and economic opportunities seem few and far between elsewhere.

"There’s no way to earn a living here. Everyone knows that. All the young people are leaving," Leshko told RFE/RL’s Ukrainian Service in a recent interview. "And I don’t think it’s going to get better, only worse."

The ethnic Hungarian in the sleepy village of Mali Heivtsi on Ukraine’s western fringes, not far from Slovakia and Hungary, is convinced that learning her native tongue is the ticket out for her kids.

But that may be tougher for Leshko and other ethnic minorities in Ukraine after the country’s parliament passed an educational-reform bill on September 5 that includes a clause making Ukrainian the required language of study in state schools from the fifth grade on.

Leshko is not a fan of the bill, which would roll back the option for lessons to be taught in other languages.

"I don’t like it. Why? Because, for example, I am a Hungarian. I was studying in a Hungarian school and I want my children also to speak Hungarian," she explained. "Maybe they will move to Hungary or maybe they will go there to earn money. In that case, the Hungarian language will be more useful than Ukrainian, I think."

Leshko is not alone in her animosity toward the legislation. Officials from Poland, Romania, Hungary, and Russia -- all countries with significant ethnic communities in Ukraine -- have all heaped vitriol on it.

Language is a hot-button issue across Ukraine but especially in the country’s majority Russian-speaking eastern regions. Russia-backed separatists gained de facto control over areas of Ukraine’s Donetsk and Luhansk regions following the country’s 2014 Euromaidan revolution, and fighting continues there between the separatists and Ukrainian forces.

Russia’s Foreign Ministry said on September 5 that the law is designed to "forcefully establish a mono-ethnic language regime in a multinational state."

A day later, Hungarian Foreign Minister Peter Szijjarto said that Ukraine "stabbed Hungary in the back" with the law.

We understand that this law is primarily directed against the Russian language, because it dominates the capital, the eastern regions. But in Transcarpathia, it hits the national minorities."

Amid the barrage, Ukrainian officials have circled the wagons.

Foreign Minister Pavlo Klimkin wrote on Twitter earlier this month that the law would not hamper the free development of other languages in Ukraine.

President Petro Poroshenko has described the legislation as a "key to the future of education in the country" but has yet to sign it into law, possibly due to the controversy.

Klimkin and Ukrainian Education Minister Lilia Hrynevych are due to meet EU officials in the near future to allay any possible fears. Hrynevych recently announced that Kyiv would ask the Council of Europe to assess the legislation.

The bill’s language requirement would overturn a 2012 law passed under Moscow-friendly former President Viktor Yanukovych, who fled to Russia and was deposed amid the Euromaidan protests. That legislation allowed for minorities to introduce their languages in regions where they represented more than 10 percent of the population.

Some saw that option as a ticking time bomb for Ukraine.

"This would mean the adoption of regional languages in about 13 of Ukraine’s 27 regions," explained Olga Shumylo Tapiola in a Carnegie Europe posting at the time. She even warned that the law "may ultimately bring about the demise of the Ukrainian language and strengthen the split between western and eastern Ukraine."

There are more than 15,000 schools across Ukraine. Of these, according to data from the Ukrainian Education Ministry, Russian is used as the primary language in 581; Romanian in 75; Hungarian in 71; and Polish in five. Some 400,000 students are enrolled at these minority-language schools.

Ethnic Russians make up 17 percent of Ukraine’s population of 45 million, according to the World Population Review. Other minorities, including Hungarians, Poles, and Romanians, each make up less than 1 percent of the population.

The wording of the controversial legislation is somewhat vague. It states that the language of instruction in the first four grades may be in a minority language. By grade five, however, only two or more subjects can be taught in any of the languages of the EU. That rules out Russian, but includes Hungarian, Polish, and Romanian. The legislation foresees a two-year transition period before fully taking effect in 2020.

Despite the outcry over the language clause, the package of educational reforms of which it is a part has been largely praised, including by Washington.

The bill mandates 7 percent of GDP be allocated for education. School would also be compulsory for 12 years. Schools and teachers would have more autonomy over setting curriculum than before, and teacher pay would be raised. The legislation emphasizes that education be more about understanding and skills rather than rote memorization.

Those progressive steps, however, have been drowned out by the uproar over the language requirement.

Hennadiy Moskal, the governor of Zakarpattia Oblast, an area in western Ukraine with a sizable Hungarian community, has been one of the more vocal critics of the legislation, claiming it contravenes the European Charter for Regional or Minority Languages.

If private individuals in Ukraine, or [Zakarpattia] Governor [Hennadiy] Moskal, want, they can establish a private Hungarian school and fund it."

Yaroslav Halas, a spokesman for Moskal, expressed what some critics suspect may be the target of the bill.

"We understand that this law is primarily directed against the Russian language, because it dominates the capital, the eastern regions. But in Transcarpathia, it hits the national minorities," he told RFE/RL’s Ukrainian Service.

Education Minister Hrynevych stresses that the legislation would not deprive minorities the right to education in their native languages.

"The law provides guarantees for national minorities to learn the languages of these groups," she said.

However, Hrynevych added that members of minority communities in Ukraine should speak Ukrainian fluently to succeed in Ukraine.

Former Justice Minister Serhiy Holovatyy argues there is nothing in the legislation to bar minority communities from studying in their languages, or, in fact, opening their own schools.

"So, if private individuals in Ukraine, or Governor Moskal, want, they can establish a private Hungarian school and fund it," Holovaty told RFE/RL’s Ukrainian Service.

But such arguments will likely fall on deaf ears with people like Leshko, unless Ukraine’s economic fortunes take a favorable turn, and sooner rather than later.

For now, however, Leshko hopes Ukraine’s Hungarian community will fight the legislation.

"I don’t know how it is going to end," she said. "I hope that all of us Hungarians will not let this happen. There are a lot of us, I hope."

With reporting by RFE/RL’s Ukrainian Service