There has been widespread condemnation, including from the EU, of the two-year prison sentence passed by a ‘court’ in Russian-occupied Crimea on the Deputy Head of the Crimean Tatar Mejlis and respected public figure Ilmi Umerov.  The prison sentence and two-year ban on any public activities were imposed, as the EU comment, “for voicing dissent against the illegal annexation of the Crimean peninsula”.

The most poignant response, however, was that from Roman Sushchenko, the Ukrainian journalist and Ukrinform news agency’s correspondent to Paris, who was seized by the Russian FSB almost exactly a year ago.  Via the men’s common lawyer, Mark Feygin, the brief letter was made public..

The letter reads: “Dear Ilmi.  Please accept my words of support, respect and admiration for your steadfastness, wisdom and courage. Bear up!  I sincerely believe in your fate and mission”. 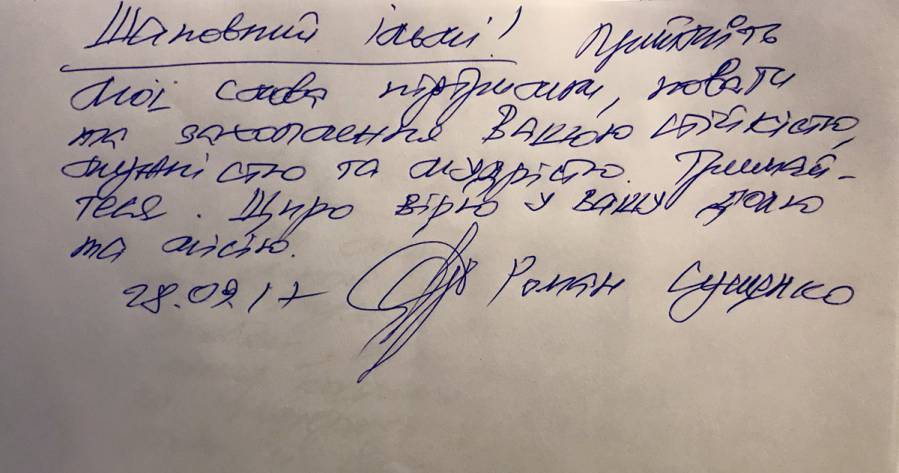 Ilmi Umerov was, until March 2014, the Head of the Bakhchysarai Regional Council.  He left that post because he could not work with the occupiers of his native Crimea, and has remained implacably opposed to Russian occupation.

The charges laid against him are under the articles of Russia’s criminal code on ‘extremism’ allegedly because of comments made in an interview to Crimean Tatar TV ATR on March 19, 2016 about Russia’s occupation of Crimea.  In fact, the statements which so-called FSB expert Olga Nikolaevna Ivanova claimed contained the so-called public calls to action aimed at violating Russia’s territorial integrity” were either not uttered by Umerov at all, or were pulled out of context.

60-year-old Umerov has Parkinson’s Disease and other serious medical conditions, and the verdict, if Moscow does not back down,  could prove a death penalty (more details here).

The then 47-year-old journalist had been working as Paris correspondent for Ukraine’s Ukrinform news agency for six years when seized by FSB officers shortly after arriving in Moscow on September 30, 2016 and held incommunicado for two days.

On Oct 3, the FSB claimed that the Ukrainian journalist was a colonel in Ukraine’s Military Intelligence, who had been gathering secret information about the activities of the Russian army and forces of the National Guard.  The FSB asserted that the information, if leaked abroad, could have caused damage to the state’s defence capacity.

Russia’s Foreign Ministry in its turn mentioned the fact that Sushchenko had not had journalist accreditation and had no right to engage in journalist activities.

Sushchenko was in Moscow on a private visit and staying with relatives.  He remained a journalist, and would be quite possible for him to have learned of information that he thought would be of interest.  This is very far removed from espionage.

Everything suggests that this was a deliberate ‘set-up’.  As with most other Ukrainian political prisoners, Russia has forced Sushchenko’s lawyer Mark Feygin to sign an undertaking not to disclose any details.  Feygin has made it fairly clear that there is nothing to disclose, and believes that a disk which Sushchenko was asked to take back to Paris for another journalist was part of a deliberate set-up by the FSB.  The most distressing part of this is that Sushchenko had agreed to take the disk for a person he has known for 28 years.  Since he was arrested while receiving the disk, the person was almost certainly involved.

Although Russia is holding many Ukrainians prisoner, Sushchenko is the first journalist to have been arrested and on charges of spying in a country which he was not working or living in.