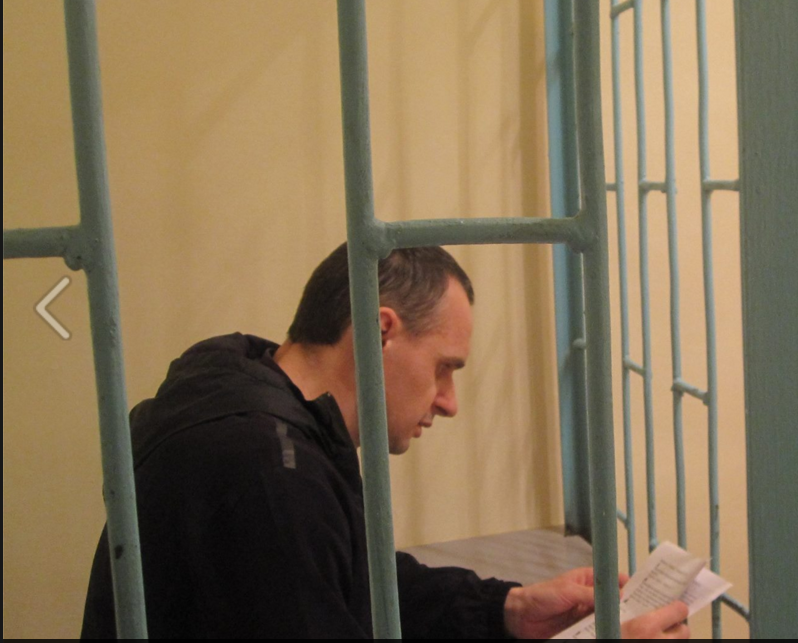 Prevented by international scrutiny from using physical force against Ukrainian filmmaker and Kremlin hostage, Oleg Sentsov, Russia is resorting to other forms of reprisals.  It seems likely that the long and arduous transfer to a notorious prison in Kharp in the Yamalo-Nenets Autonomous Okrug is one such method, as is the failure to hand Sentsov the very many letters he is sent from all over the world.

Russian human rights defender Zoya Svetova has published a letter Sentsov wrote to her on September 17, from the Tyumen SIZO [remand prison].  As reported, Sentsov was first taken, without any explanation, from the Yakutia prison where he had been held, at the beginning of September.  The process of transfer is always gruelling and dangerous, since family and lawyers have no information about the person’s whereabouts and cannot intervene if ill-treatment is suspected.

Sentsov’s letter makes it clear that the prison authorities has prevented him from receiving letters for months at a time.  Svetova points out that it can only be guessed whether all letters written by Sentsov have been sent to their addressees.

It has been known for some time that Sentsov was not being given most of the letters sent from all over the world.  It appears to be only Sentsov, and not Moscow’s other Ukrainian political prisoners who are treated in this fashion.

The fact that not all letters get through does not negate the enormous importance of writing.  Firstly, the letters may, as in this case, suddenly be delivered in bulk, and secondly, any such letter sends a vital message to Moscow that it is being watched. For the moment, however, Sentsov writes that there is no sense writing to him until he reaches the final destination planned.  The same is not true of Oleksandr Kolchenko, the civic activist jailed with Sentsov and letters to him are badly needed.

Sentsov knows that his letters are subject to censorship, and is also clearly not a person prone to bemoaning his fate.  He says openly, however, that he “expects nothing good of this work trip”, as he puts it, and mentions also that the travel through the Irkutsk and Omsk regions has given him direct understanding of how bad things can be, not just through the tales told.

“Nobody touches me physically, of course, but you understand very well that this system can punish in perverted fashion and torture, without using brute force.

But never mind, it will all be good!»

He has long not written, he explains, because of his mood.  He is not succumbing to depression or gloom, he stresses, but he is not a sociable person, and “there are times when I minimize external contact.”  This has, admittedly been helped along by the prison authorities with their refusal to hand over letters.

He has held on to all old letters, which he has to take with him on this cruelly arduous series of transfers.

One thing he does ask is that people do not send parcels, since he is allowed only one every three months, and he needs to ask his cousin and others to spend specific, urgently needed, items.

The punishment for international attention and consequences is evident.  After Ukraine’s Foreign Minister Pavlo Klimkin tried to telephone Sentsov, the latter was placed in a punishment cell.  Sentsov clearly believes that his being moved is linked with the Pussy Riot protest in Yakutia in early August.

This is not, he stresses, a reason to do nothing. “You at liberty can do whatever you consider necessary in my defence or that of other prisoners. Just be aware that local law enforcers have their own logic in their heads, and they often react like this”.

He acknowledges that the journey is threatening his health but insists that this is no reason for any public hysteria.  “I am not the only person imprisoned, there are a lot of us, and my circumstances are far from the worst”.