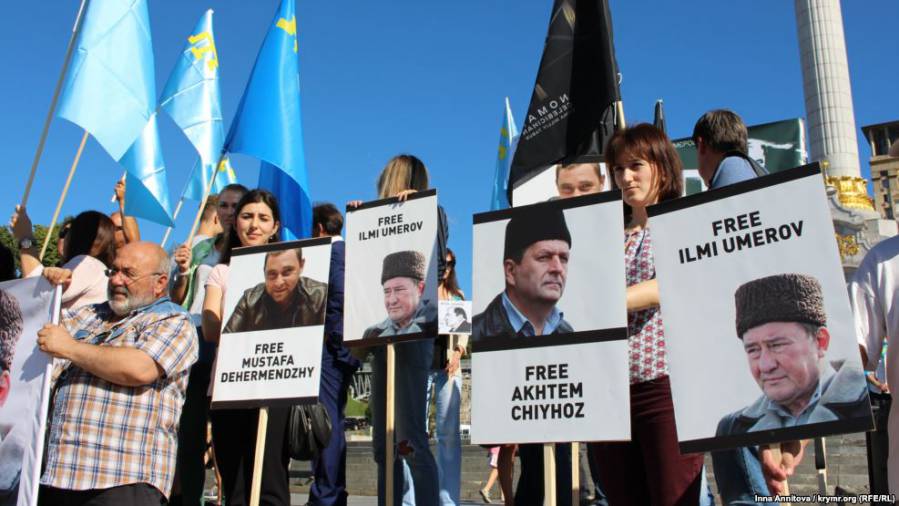 The European Parliament has demanded that Russia stop its persecution of Crimean Tatars and ethnic Ukrainians in occupied Crimea and called on the European Court of Human Rights to give priority status to applications from Crimeans seeking redress.  Given the openly lawless ‘trials’ and sentences against Crimean Tatar leaders Akhtem Chiygoz and Ilmi Umerov, journalist Mykola Semena and ongoing imprisonment of opponents of Russia’s annexation of Crimea, Crimean Muslims and others, the call could not be more timely.

Although the European Parliament has no means of ensuring implementation of the calls made in its resolution of October 5, 2017, the resolution’s hard-hitting tone and detail are of importance, especially given Ukraine’s suit against Russia at the UN’s International Court of Justice [ICJ] in the Hague.  The resolution, after all, confirms Russia’s systematic violations of the International Convention on the Elimination of All Forms of Racial Discrimination, to which it is a signatory.

The Resolution specifically condemns “the discriminatory policies imposed by the so-called authorities against, in particular, the indigenous Crimean Tatar community, the infringement of their property rights, the increasing intimidation in political, social and economic life of this community and of all those who oppose the Russian annexation”.  It also calls the banning of the Crimean Tatar Mejlis [representative assembly] a grave violation of the rights of the Crimean Tatars, and calls on Russia to comply with the provisional measures which the ICJ imposed on April 19, 2017.

Russia has thus far largely ignored the interim ruling from the ICJ, which it has committed itself to obey, and the European Parliament’s words are unlikely to change that.  The EP Resolution, however, like the recent UN monitoring mission’s report do spell out Russia’s violations and make its ongoing attempts to treat its occupation of Crimea as normal, and a reflection of the will of the Crimean people even harder to uphold. ,

The EP Resolution comes just weeks after three repressive sentences, each of which is given separate mention and condemned.  Akhtem Chiygoz, Deputy Chair of the Crimean Tatar Mejlis [representative assembly] has been imprisoned since January 2015 on charges pertaining to a pre-annexation demonstration over which Russia has no jurisdiction.  He was sentenced on August 12 to eight years’ imprisonment after a grossly flawed trial which he was prevented from attending in person.

Ilmi Umerov, a Deputy Chair of the Mejlis and Crimean Tatar leader and Mykola Semena, a Ukrainian journalist were both sentenced on charges under Article 280.1 of Russia’s criminal code, of making ‘public calls to action aimed at violating Russia’s territorial integrity’.  Neither man had concealed his opposition to Russian occupation, but there were no ‘public calls’, and they were both tried, as the resolution notes in Umerov’s case, “for voicing dissent against the illegal annexation of the Crimean peninsula”.

With limited space, the Resolution could not go into details about any of these three cases, each of which was quite extraordinarily lawless.  The real two-year sentence passed on 60-year-old Ilmi Umerov, who suffers from several life-threatening medical conditions, was based on a rigged translation of an interview he gave in Crimean Tatar.  The EP is not alone in expressing total condemnation of all three sentences and the demand for them to be revoked, and Chiygoz to be released.

The EP lists all Russia’s Ukrainian political prisoners, including those not from Crimea, and notes Russia’s reprehensible behaviour in imprisoning the Ukrainians thousands of kilometres from their families and homes.  It “deplores the plight of Crimean children growing up without their fathers”.  It calls this “a blatant violation of international human rights, children’s rights and the international obligations of the Russian Federation, such as the UN Convention on the Rights of the Child”.

This comes just a day after Lilia Budzhurova, the Crimean Tatar journalist and founder of Bizim Balalar [Our Children]  reported that the number of children whose fathers have been taken from them has risen to 73.

“The reality of repression and the application of legislation on extremism, terrorism and separatism has led to a severe deterioration in the human rights situation on the Crimean peninsula and to the widespread violation of freedom of speech and association”.

While Russia may be impervious to such criticism, international bodies and the democratic community need not be, and the calls from the European Parliament can be usefully cited and followed up.  This applies in particular to the calls regarding the European Court of Human Rights and sanctions.

The call for Strasbourg to give priority to applications from victims of repression in Crimea is critical.  Russia is in multiple breach of the European Convention on Human Rights and the European Court of Human Rights will almost certainly issue judgements against Russia in all the cases pertaining to political prisoners.  There is, however, a huge backlog of cases, and without priority treatment, it could be many years before the applications of men currently imprisoned are heard.

The EP’s call for sanctions can only be warmly welcomed and quoted in full. It “Underlines that restrictive measures should be imposed on all individuals responsible for gross human rights violations, including those Crimean and Russian officials directly responsible for charging and sentencing Akhtem Chiygoz, Mykola Semena and Ilmi Umerov, and these should include the freezing of assets in EU banks and travel bans; reiterates its support for the EU’s decision to prohibit imports from Crimea and the export of certain goods and technologies, investment, trade and services to Crimea”’

Individuals can assist here by calling on politicians in their own countries to introduce such sanctions.  While it may be the Kremlin who ultimately decides whether or not Ukrainian political prisoners are released, such sanctions provide a powerful message to all willing to carry out its repressive agenda that they will be held to account.

The EP Resolution can be read in full here