Zelensky’s ‘survey – legally questionable and cynically populistFar-right French politicians enter Crimea illegally to rubberstamp fake Putin and occupation forever voteZelensky urged to clarify his ‘red lines’ on Steinmeier format, Donbas and RussiaJudicial reform dilemma for ZelenskyPoland’s Government uses ‘Public TV’ as a propaganda tool to win the elections. Will the EU react?‘Banned’ Ukrainian Communist Party puts forward candidate for Presidential ElectionsHow I Remember Boris NemtsovWhy Election Reform Should Be a Top Priority NowNine Things Ukraine Should Do in 2018Menacing attack on Independent Polish TV channel as ruling party set to gain control over judiciaryUkraine Politicians Embrace Extreme RhetoricUkraine’s Challenges Are Very Real, but Now Is Not the Time for the West to Let UpPragmatism Prevails over Populism in UkraineChatham House Report: The Struggle for UkraineNow Is the Time for Electoral Reform in UkraineWill Ukraine’s Parliament Accomplish Anything This Fall?Freedom House: The False Promise of PopulismEU report: Ukraine carrying out unprecedented reformsTrump, Brexit, and the Myth of Ukrainian NationalismThe Top Ten Things Ukraine’s Parliament Needs to Do This Fall
• Topics / Elections

Now Is the Time for Electoral Reform in Ukraine 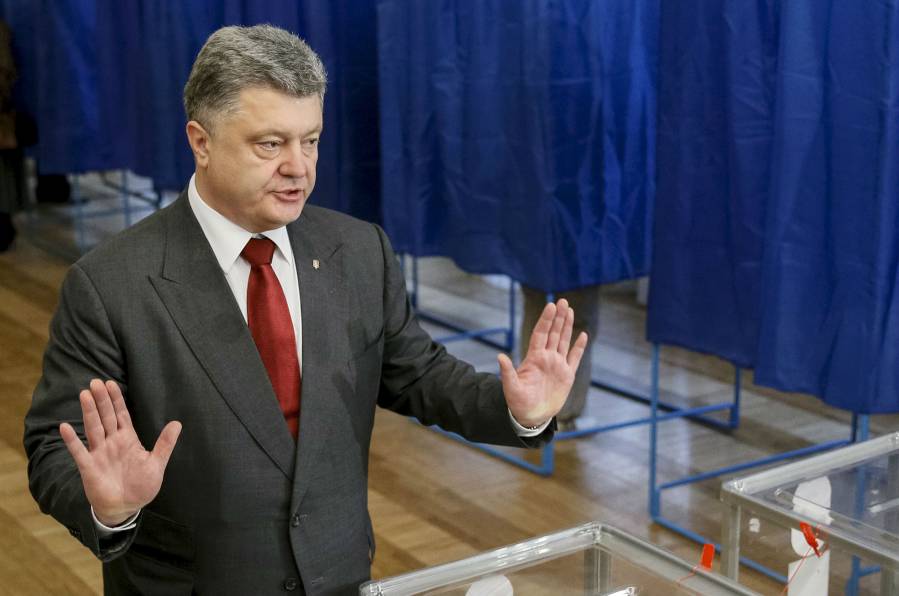 Ukrainian President Petro Poroshenko talks to the media as he visits a polling station during a regional election at a polling station in Kyiv, Ukraine, October 25, 2015. Ukrainians go to the polls on Sunday to appoint mayors and council heads to regional seats. REUTERS/Gleb Garanich

Ukraine’s parliament has a busy agenda this autumn. Not only is a sweeping healthcare reform package needed to fix the country’s broken system, judicial reform, the creation of a special anticorruption court, and land reform are also pending. In spite of these burning priorities, now is also the best time for parliament to pass electoral reform.

The next general election is not until 2019, but now is the time to tackle this thorny issue. Ukraine needs electoral reform for the simple reason that the political environment will become progressively more heated in 2018. Every day that passes without electoral reform will make approving those reforms more difficult. Historically, Ukraine has waited until shortly before elections to pass changes. These intentional delays only strengthen corruption and produce self-serving politicians who anger the public. This negative cycle reinforces public cynicism and fuels support for extreme politics—something Ukraine most certainly does not need.

This cycle of procrastination and cynicism must be broken. By beginning the debate and reaching consensus on electoral reform, all parties will have an even playing field and a clear set of rules for the election. Candidates will have ample time to plan and implement their campaigns, election administrators will have adequate time to efficiently manage the new system, and voters will have time to adjust to the new framework in order to elect more responsible public officials. At a time when the country is lagging in its reform progress, taking the initiative to pass electoral reform will show that the Euromaidan was not in vain, but marked a genuine, permanent change in the country’s character.

Electoral reform would involve five things. First, the Central Election Commission (CEC) members must be re-appointed. The terms of thirteen out of the fifteen members have expired, with a dozen members already more than two years past their expiration dates. Without a quorum of members whose terms are current, the validity of all elections held since July 2015 is questionable. Various solutions have been proposed, but under the law, the president must appoint new CEC members. Bankova is reluctant to address the issue out of fear that it will send a signal that elections are near. But the presidential election is just twenty months away and parliamentary elections will occur four months later. Elections are nearing regardless of whether Bankova acknowledges it.

Second, Ukraine must address the issue of voting by internally displaced persons (IDPs). Due to the Russian annexation of Crimea and occupation of parts of the Donbas, there are more than 1.6 officially registered million IDPs. However, Ukraine’s archaic propiska (registration) requirements complicate the issue of voting for IDPs and create confusing disparities between elections. Draft law 6240 remedies this problem by allowing citizens to vote where they currently reside, rather than where they are registered. At a minimum, this law deserves a debate, as well as a parliamentary vote up or down.

Third, Ukraine continues to be plagued by election fraud and violations because of the country’s failure to prosecute electoral offenses. Amending the criminal code, procedure code, and code of administrative offenses to ensure the implementation of dissuasive sanctions for electoral fraud and abuse is long overdue. Even one successful prosecution of a blatant act of electoral fraud would have a much-needed chilling effect on others contemplating such illegal actions. Unfortunately, until loopholes are fixed, it will be business—or in this case, fraud—as usual.

Next, political finance reforms need to be strengthened by introducing electronic financial reporting to allow the public to track and verify political party spending. Ukraine has made some progress in this area since the Euromaidan, but widening access to information is the next step.

The fifth and perhaps most contentious issue will be deciding which electoral system to use for the next round. Currently, Ukraine has a fifty-fifty system, which elects half of the members of parliament through geographical districts, and the other half from closed party lists among those parties receiving five percent of the vote nationwide. In 2014, there was some momentum in favor of eliminating single mandate districts in favor of an open-list party list. As an experiment, the 2015 national local elections were held under an open-list system. However, the system, which was largely copied from a similar version in St. Petersburg, was ill-conceived and poorly implemented, leaving voters unsatisfied with their initial experience. Perhaps changing to a true European style—open party list system—is the answer, or maybe the best solution is maintaining the status quo with the current fifty-fifty system. Others have suggested increasing the number of women on party lists. These are the kind of questions that need to be debated publicly and decided by parliament now, rather than waiting till shortly before the elections.

But without political will and leadership by the president and parliament, none of these issues will be addressed. Or if they are, they will be cynically decided just before the elections, to the benefit of one political force—and at the expense of another. Holding fair elections and having stable rules of the game is fundamental to a healthy democracy. It’s time for Ukraine’s politicians to give the public an electoral system it deserves.

Brian Mefford is a senior nonresident fellow at the Atlantic Council’s Eurasia Center and managing director of Wooden Horse Strategies, LLC, a communications, governmental relations, and risk analysis firm based in Kyiv.