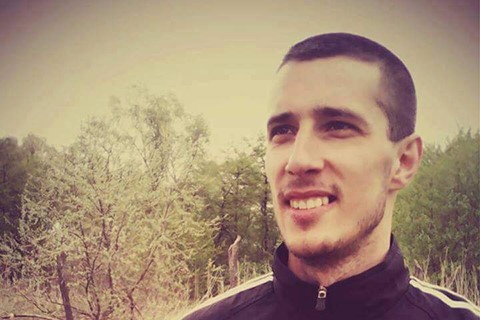 Oleksandr Shumkov has become the latest Ukrainian to be abducted to Russia and imprisoned.  There is a major question mark over how the 28-year-old civic activist came to be in Russia, but it would be difficult to dispute the surreal nature of the charges.  The Ukrainian is accused of involvement in a Ukrainian organization that only Russia calls ‘extremist’, and that is entirely legal in Ukraine.

Shumkov disappeared towards the end of August, however it was only on September 26 that Larisa Shumkova received a letter from the Russian FSB for the Bryansk oblast informing her that her son was held in the Bryansk SIZO or remand prison.  The letter states that Oleksandr was detained on September 6 on suspicion of “committing a crime” under Article 282 § 2 of the Russian criminal code – ‘involvement in an extremist organization’.

Larisa Shumkova told Ukrainska Pravda that she had learned, from a Kherson separatist”, of Oleksandr’s imprisonment in Russia back at the beginning of September “.  She was frightened to harm her son by making the news public, and she and members of the right-wing movement he is close to tried to find out what had happened.

Larisa Shumkova is convinced that her son would not have voluntarily crossed into Russia and it is certainly clear that he had every reason to believe he could be in danger.  Shumkov is a former Maidan activist, a member of the Kherson branch of the Union of Ukrainian Youth in Ukraine and a contracted military servicemen for the Ukrainian Armed Forces.  All of this is sufficient in Vladimir Putin’s Russia to put the young man at risk, however there is more.  Shumkov is a ex-security guard to Dmytro Yarosh, who is now an MP, but was the leader of Right Sector.  This right-wing Ukrainian nationalist movement has long been demonized by the current Russian regime, and has been officially outlawed in Russia since early 2015.

Ukrainska Pravda cites its own sources within the Border Guard Service as saying that they “have information that the young man legally crossed the Ukrainian-Russian border, apparently by car”.

Kherson activists have now initiated a civic campaign to #FreeShumkov, since Ukraine’s SBU [Security Service] has said that this is not their business, and the Interior Ministry have done no more than promise to try to find out what has happened.  The activists have provided a bank account to help pay for a lawyer for Shumkov.

Tyzhden.ua reports that the Ukrainian consul was finally able to see Shumkov at the beginning of October, with a brief meeting soon after with an independent lawyer.  Shumkov has managed to pass on that he “ended up in Russia as the result of a provocation”.

Shumkov has clearly long taken an active civic position, with this becoming even more active during the Revolution of Dignity, or Euromaidan.  While formally part of a military unit, he was apparently deployed as a person with a higher legal education in searching for and carrying out initial probes of deserters.

It is possible that the ‘provocation’ and seizure of Shumkov is linked in some way with the earlier arrest of Denis Bakholdin, the Moscow activist and Kremlin critic who is also being held in the Bryansk SIZO.  His whereabouts were only discovered three months after he disappeared after leaving Kyiv, where he had been living, to visit his mother who was in ill-health.

Nadezhda Bakholdina has reported that her son was subjected to torture - chained with handcuffs to a radiator, beaten and kicked to get him to ‘confess’ to being a member of Right Sector (details here).

Russia began abducting and / or prosecuting Ukrainians soon after its invasion of Crimea and military aggression in Donbas.  One of the first men to be tricked into entering Russian territory, held incommunicado for 18 months and brutally tortured was Ukrainian nationalist Mykola Karpyuk, who was also linked with Yarosh.  He is serving a huge sentence on grotesquely fabricated charges, as are Ukrainian filmmaker Oleg Sentsov and civic activist Oleksandr Kolchenko.  The latter were supposed to have been part of a ‘Right Sector terrorist plot’ in occupied Crimea, with the FSB totally impervious to the lack of any evidence and the total implausibility of their ‘plot’, given Kolchenko’s extreme left-wing views.

There has been a disturbing increase over recent months of cases involving direct abduction of Ukrainians.  There is every reason to assume that Oleksiy Sizonovych, a 61-year-old pensioner was first captured by Kremlin-backed militants in the so-called ‘Luhansk people’s republic’ and taken by force to Russia.  There he was clearly put under pressure to refuse a proper lawyer and ‘confess’.  He was sentenced in July 2017 to 12 years’ imprisonment (details here).

It has long been clear that Ukrainians may be at risk of such treatment in Russian-occupied Crimea, Donbas, as well as in Russia.  The recent abduction of 19-year-old Pavlo Hryb from Belarus has extended the danger zone. Hryb was taken by force to Krasnodar where he is being held in detention without urgently needed medication.  He is facing ‘terrorism’ charges, although the lad had never once set foot in Russia, with the charges apparently over strongly critical opinions expressed in private correspondence with a young Russian girl (details here).