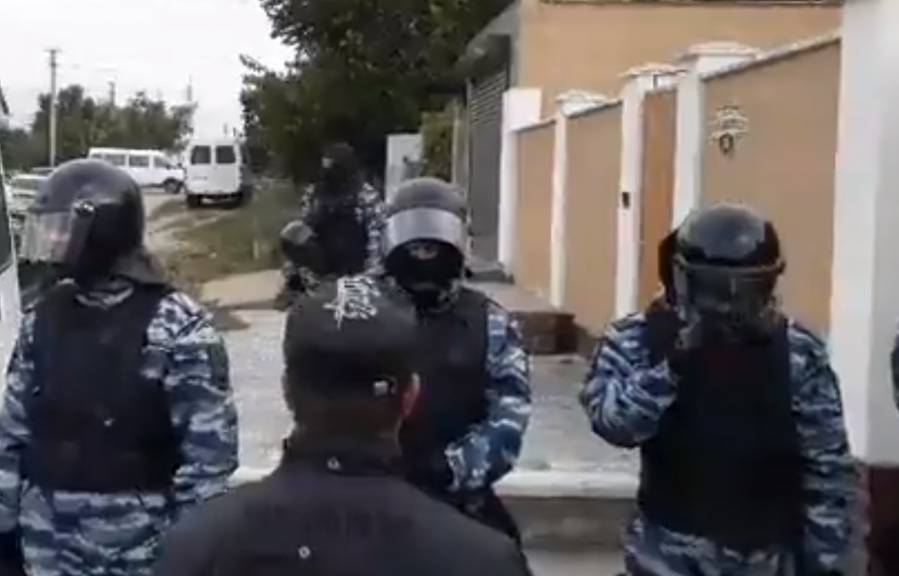 Armed searches began early in the morning of October 11 in a number of Crimean Tatar homes in Bakhchysarai.  They resulted in the arrests of six more men in Russia’s ‘Hizb ut-Tahrir conveyor belt of repression’ and the detention of 11 other men, who had come out to show solidarity and to ensure that the events were reported.  This was yet another confirmation that Russia is using such charges against people who take a firm civic position and refuse to be cowered into silence.  Some of the men have been active in the Crimea Solidarity civic initiative which arose because of the mounting repression since Russia’s annexation of Crimea.

Russia is very obviously trying to silence dissident voices, and those who unwaveringly report, often streaming onto social media, the ongoing repression.  Thus far, without success, but all such peaceful civic resistance comes at a huge cost for the men targeted and their families.

The vans with armed and masked enforcement officers arrived in different locations at around 6 a.m. on Wednesday morning.

Searches were carried out at the homes of Seiran Saliev, who has faced repressive measures earlier, Ernest Ametov; Suleyman Asanov; Memet Belyalov; Timur Ibragimov; and Server Zekeryaev.  In at least four of the homes which armed men burst into, there were very small children.

The search of Suleyman Asanov’s home was reportedly carried out in particularly extreme mode, with drones overhead videoing the proceedings, the Internet blocked and lawyer Emil Kurbedinov prevented from entering the house.

Lawyer Mammet Mambetov was similarly prevented from being present during the search of Seiran Saliev’s home, and at least two Crimean Tatars (Alimar Belyalov and Akhmad Suleymanov) who were streaming the events outside Saliev’s home were also detained.  People standing outside were also ordered to disperse.

Activists report that the masked and armed enforcement officers tried everywhere to prevent people streaming or even photographing what was going on.

They were all later brought before Russian-controlled courts who, as usual, found them guilty of infringing the rules on public gatherings and imposed fines.

In a clearly coordinated move,  Russian state media produced total lies about the searches and arrests.  RIA Novosti, for example, reported almost simultaneously with the events that “The activities of a Bakhchysarai Hizb ut-Tahrir group had been stopped”, with the report going on to say that the FSB had initiated criminal proceedings under parts 1 and 2 of Article 205.5 of Russia’s criminal code (organizing or taking part in a ‘terrorist organization’).

Russian media propaganda regularly distorts the searches and arrests of peaceful activists in occupied Crimea, however it seems this time one fact was correct, and the six men have all been charged with supposed involvement in Hizb ut-Tahrir, a peaceful pan-Islamist organization which is legal in Ukraine and most countries.  The Russian Supreme Court ruling in 2003 which declared the organization ‘terrorist’ was held in secret, and only reported after it was too late for the organization itself and human rights groups to appeal.   Russia has since used such charges as a ‘conveyor belt of repression’, with men sentenced to huge sentences for supposed ‘involvement’ in an organization that is not known to have committed any act of terrorism or violence anywhere in the world.  All those convicted solely on such charges are recognized by the renowned Memorial Human Rights Centre as political prisoners.

Russia has, particularly illegally, applied this repressive practice in occupied Crimea.  Four men, imprisoned since early 2015, are currently held in Russian prisons after grossly flawed ‘trials’, while another 15 men have been in effectively indefinite custody in Crimea for between a year and 18 months.

The number of such political prisoners has now reached 25.