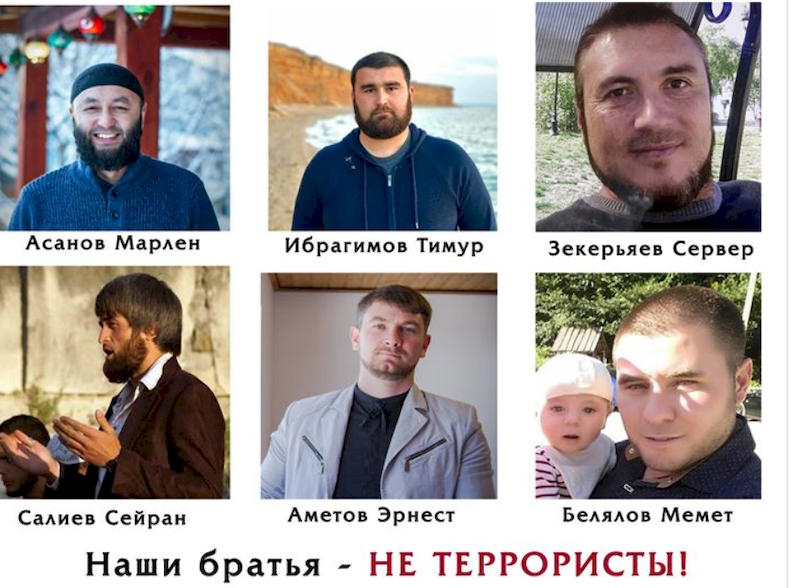 Our brothers are NOT TERRORISTS!

Six more Crimean Tatars have been arrested in Russian-occupied Crimea, charged with involvement in the peaceful Hizb ut-Tahrir organization which is legal in Ukraine.  The six include well-known civic activists, and the entire operation, including the mass detention of people who tried to stream or photograph the proceedings, seemed a cynical warning of what Crimean Tatars and other Ukrainians should expect for not keeping their heads low.

Although the detention hearings are only due on Thursday, there is nothing to suggest that the FSB will deviate in any detail from the conveyor belt arrests and sentences which Russia has been carrying out against Russian Muslims for over 10 years and which it is now, in flagrant violation of international law, applying in occupied Crimea.

The focus in this norm, on recognition as ‘terrorist’ as opposed to any actual terrorism, is no accident.  It is enough for Russia’s Supreme Court to have declared Hizb ut-Tahrir ‘terrorist’ for men to be imprisoned for 20 years.  Neither prosecutor, nor court is at all worried that Hizb ut-Tahrir has never committed an act of terrorism or violence anywhere in the world, and the Russian Supreme Court never explained why it considered the movement to be ‘terrorist’.

Nor is there any real need to prove that a person is in fact a member of Hizb ut-Tahrir.  Russia allows for ‘secret witnesses’, with the court uninterested in probing how or why this person has come forth to claim he was ‘recruited’ by the defendant or heard ‘incriminating’ conversations.

Russia began arrests of Ukrainians on such charges in January 2015 and there were, until October 11, 19 Crimean Muslims held in detention or, in the case of the first four, ‘convicted’ and imprisoned in Russia.  That figure has now shot up to 25.  All are devout Muslims, law-abiding citizens, with most of them family men with young children.

A number of the men previously arrested, such as human rights activist Emir-Usein Kuku and Muslim Aliev, are men whose civic position is likely to have irritated the occupation authorities.  The same is true of these new arrests.

One of the men – Seiran Saliev – has already faced administrative prosecution under Russian occupation first a fine for showing solidarity with victims of repression, then an 11-day prison sentence for a 2013 (pre-annexation!) social media post about a Hizb ut-Tahrir meeting.

He has remained an active member of the community and this time the FSB came with their guaranteed conviction, long sentence and promotion or bonuses for those carrying out the prosecution.  Saliev is married with four small children.

Timur Ibragimov is also a civic activist, and has a severe sight impairment.  He too has four children, as does Suleyman Asanov.  Memet Belyalov has just one child, while Server Zekeryaev has 12, including a new-born infant..

These prosecutions for supposed involvement in Hizb ut-Tahrir are particularly pernicious because acquittals are almost unheard of.  In the trial of Crimean Tatar Ruslan Zeytullaev, the case was so inadequate that even Russian judges balked at passing the sentence demanded.  The prosecutor simply kept appealing until a court meekly handed down the huge sentence the FSB wanted for their paperwork.

The other reason is the relative anonymity of the victims.  All six men arrested on Wednesday are clearly members of their community, men who will go out of their way to help their neighbours, etc.  They are not, however, well-known outside Bakhchysarai and it is perilously easy for them to become seen as just more numbers.

It should be noted that the numbers are getting frightening.  There are now nearly 60 Ukrainians held on fabricated charges in Crimea and Russia, while the number of children just in Crimea whose fathers have been taken away has risen to around 100.

It had been exactly a year since the last arrest – that of five Muslims from near Simferopol, and the unusually long period without ‘Hizb ut-Tahrir arrests’ had raised a flicker of hope that Russia might have backed off.  The arrest on October 2 of four Crimean Tatars on charges of involvement in Tablighi Jamaat, which Russia has just as arbitrarily labelled ‘extremist’, and that on Oct 11 of six men on Hizb ut-Tahrir charges make it clear that there is to be no let-up in repression.

The renowned Memorial Human Rights Centre recognizes all those convicted merely of involvement in Hizb ut-Tahrir as political prisoners, but usually waits until the trial is over.  It appropriately declared the first four Ukrainians on trial in occupied Crimea political prisoners earlier since, as well as the other reasons, Russia is an occupying state that has no right to impose its legislation.

The same is true of all these cases, and it would be helpful if Memorial, Amnesty International, Human Rights Watch and other international NGOs would take a more proactive role in condemning the arrests of Ukrainian citizens, persecuted for their views and faith under Russian occupation.