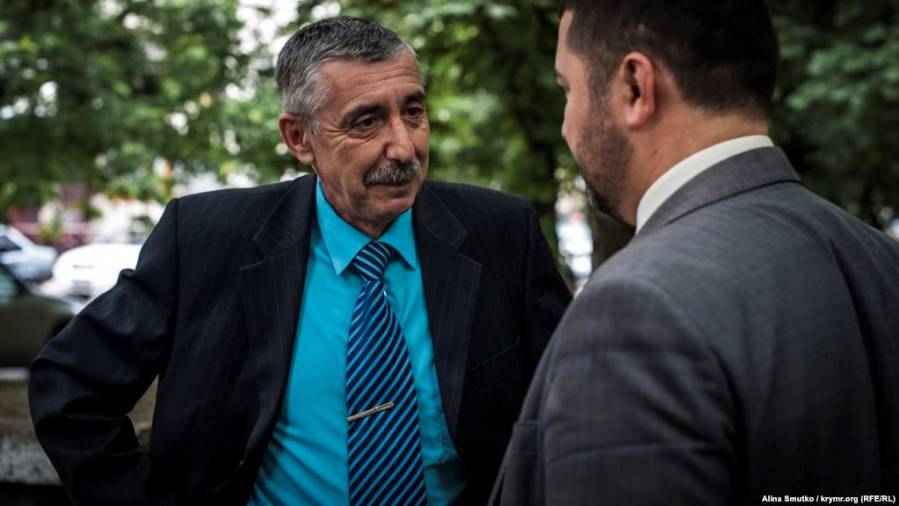 The FSB in Russian-occupied Crimea has formally charged 54-year-old Crimean Tatar activist Suleyman Kadyrov with making a ‘public call to violate Russia’s territorial integrity’ for a Facebook repost with the comment “Crimea is Ukraine”.   This follows the politically motivated sentences against Crimean Tatar Mejlis leader Ilmi Umerov and journalist Mykola Semena on identical charges, but there are a couple of odd differences. The official indictment took the FSB a year to formulate, and flies in the face of the ‘expert assessment’ which found no such ‘public calls’.

The Facebook repost in question was from March 29, 2016.  In it, Kadyrov gave a link to a TV ATR broadcast on money being collected for the Crimean Tatar ‘Asker Battalion’.  Kadyrov commented on the link, approving such donations and stating that Crimea is part of Ukraine.

Russia now wants to put him on trial, with the indictment under Article 280.1 § 2 of Russia’s Criminal Code.  The new norm about such ‘public calls to violate Russia’s territorial integrity’, came into force in May 2014.  The fears that it would be used to prosecute and imprison Ukrainians and Russians in the RF for criticizing Russia’s invasion and annexation of Crimea have unfortunately proven correct.  60-year-old Crimean Tatar leader Ilmi Umerov was sentenced on September 27 to two years’ imprisonment, on the basis of a falsified translation of an interview in which he said that stronger sanctions would force Russia to leave Crimea and Donbas.  67-year-old journalist Mykola Semena received a two-year suspended sentence with a total ban on any public comments, addresses, etc. for an op-ed text in which he expressed his opposition to Russian occupation.

Kadyrov is now the third Ukrainian to be tried for upholding Russia’s correct territorial borders – those agreed in numerous international treaties which Russia has never withdrawn from.

Officers, many with machine guns, turned up early on Oct 5, 2016 and showed Kadyrov a search warrant.  He was told that the search was ‘on suspicion of extremism’, but was not told that criminal proceedings had been initiated.  The warrant, it later transpired, was issued by judge Igor Rodionov over alleged public calls to deny ‘the borders of the Russian Federation’ and support the Crimean Tatar Asker Battalion.

Kadyrov immediately stated that he would not give any testimony or explanations, nor would he sign their search protocol, since his rights were being violated.  He asked to have his lawyer present, and witnesses he chose, but the officers insisted on using the ‘witnesses’ they brought.

They spent around 3 hours and took away his computer and telephone.

The charges were formally laid on October 11, 2016, though even then there was major delay in providing the relevant document.

He left the police force in March 2014, unwilling to work in the Russian police after annexation.  From then on he concentrated on human rights and civic activities, providing legal aid and consultation to other Crimeans.  He is also a member of the Feodosia mejlis, or self-governing body and initially assumed that the fact that he had been targeted was linked with his involvement in the Mejlis which Russia has banned, after it maintained implacable opposition to Russian occupation.

In April 2017, Kadyrov also became the latest Ukrainian to be added to Russia’s ‘List of Terrorists and Extremists’.  There was still no indictment, let alone conviction, for the supposed ‘public calls’,  just Kadyrov’s unequivocal position, shared by the United Nations, all international bodies and democratic countries, that Crimea is part of Ukraine.