Russia honours founders of the Soviet Terror, jails historian who uncovered their victimsJailed historian of Stalin’s Terror declared a political prisoner in Putin’s RussiaRussia puts Historian of the Soviet Terror on TrialRussian historian of the Terror jailed after Soviet-style denunciation faces new chargesRussian historian of Soviet terror arrested on chillingly cynical chargesRussian activists jailed for crucifix protest at monument to notorious secret police chiefPortraits of Stalin hang in police offices in Putin’s RussiaMonument to Joseph Stalin unveiled in militant-controlled LuhanskRussian-Occupied Crimea: Memorial Plaque and Glorification of StalinDramatic increase in number of Russians who justify StalinStalin Museum: Putin’s Russia Immortalizes Bloody DictatorAnger and Protest over Stalin Monument in YaltaPortrait of Stalin appears in Russian-occupied CrimeaStalingrad as latest step in re-glorification of tyrantNeo-Nazis in Moscow’s ServicePro-Russian separatists start their own anti-Semitic TV channelPro-Russian, anti-Roma, anti-Semitic and hunting out Ukrainian speakersThe Donetsk anti-Semitic leaflets – what should not be overlookedEast Ukraine crisis and the ’fascist’ matrixRussia continues its false narrative as defender of oppressed minorities in Ukraine
• Topics / Victims of political repression 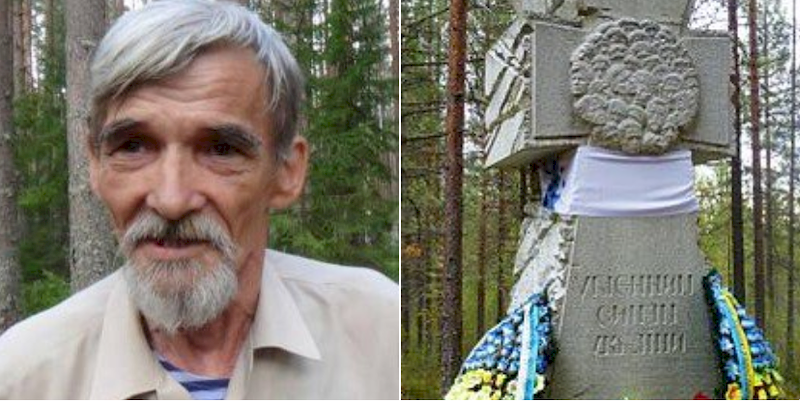 It is exactly 80 years since the killing by quota of Ukrainian, Russian and other prisoners sent to the notorious Solovki Labour Camp during the worst months of Stalin’s Terror.  From 27 October to 4 November 1937, 1,111 prisoners were executed by the NKVD, including 289 Ukrainian writers, playwrights, scientists and other members of the intelligentsia.  Their remains lie, together with those of nearly nine thousand victims, at the Sandarmokh Clearing in Karelia, near the Russian border with Finland.

Perhaps the anniversary was not the reason for the low trick played on Yury Dmitriev, the imprisoned historian of the Terror, and his many friends and supporters on October 25.  It would, however, be nothing new in this profoundly disturbing prosecution and imprisonment of a world-renowned historian in President Vladimir Putin’s Russia.

It is thanks to Yury Dmitriev that very many Ukrainians, Russians and representatives of other nationalities have learned the fate of their parents or grandparents.  It was he and his colleagues from the Karelia Memorial Society who discovered the mass grave at Sandarmokh, and helped to make it a place of remembrance visited by people from all over the world.

On the eve of this first anniversary that Dmitriev is unable to spend attending remembrance events, it is likely that even more people than usual would have been waiting in the court corridor to greet the historian as he was taken to the latest closed court hearing. They and Dmitriev’s lawyer, Viktor Anufriev, were told that the court hearing had been postponed.

It hadn’t, but Anufriev only learned of this when he went to visit Dmitriev in the SIZO [remand prison] and discovered that his client was in court.

It was the first time since Dmitriev’s arrest in December 2016 that he passed through an empty corridor.  The ruse enabled judge Marina Nosova to enter through the main door, and not have a guard to protect her against prominent writers, actors, composers, and members of the public appalled by this judicial spectacle.

Novaya Gazeta explains that the court was supposed to be announcing the results of a repeat ‘expert assessment’ of the photos over which Dmitriev is charged.

As reported, Dmitriev is charged with ‘preparing pornography involving a minor’ (Article 242.2 of Russia’s criminal code) and ‘depraved actions with respect to a child under the age of 11’ (Article 135) over a folder filed on his computer which contained 114 photos of his foster-daughter Natasha.  The little girl had been painfully thin and in poor health when he and his former wife took her from the children’s home when she was three, and the authorities had themselves advised him to monitor her development.  Each of the photos, taken between 2008 and 2015 recorded her weight and height.   Dmitriev has said that they were essentially a medical journal, which he stopped keeping in 2015, when Natasha was 10 as there were no longer any concerns about her physical wellbeing. The photos showed her naked, which made it easy to see whether she seemed too thin, whether ribs were protruding, etc.  They also ensured that the authorities saw that she was well-looked after and that there were no suspicious bruises.

On June 22, 2017, Dr Lev Shcheglov, the President of the National Institute of Sexology, was questioned at the trial.  He was categorical that none of the photographs in the Dmitriev file are pornographic.  The same conclusion was reached by other experts called by the defence.  Two Moscow specialists – Grigory Shayanov and Fyodor Katasonov – also confirmed that it was common practice in Russia to take photographs for such medical purposes.

The weight of evidence against the so-called ‘expert assessment’ was so damning that even the prosecutor Yelena Askerova agreed that another assessment was required.  She insisted, however, that this be only of the nine photographs which a mathematician had deemed pornographic’.  The defence objected, believing that the extraction of 9 photos of the entire folder of 114 was aimed at removing the context and trying to claim that Dmitriev could not have been impelled by the need to record the young girl’s physical development.

Nosova agreed to the repeat assessment, but chose a private company with a founding capital of 10 thousand roubles [150 EUR] which is registered in an ordinary flat in St Petersburg. Novaya Gazeta reports that neighbours say that the flat is occupied by “ordinary people who work at the Apraksin Market”.

Maybe they really do sell ‘expert assessments’ and not fish or vegetables at a market, but they do not have their own specialists, and the assessment is not ready.

Anufriev assumes that the plan was to obtain an ‘expert assessment’ that reiterated the findings of the first, but that the publicity over this case has made it harder to find people willing to put their signature to such a document.

One of the reasons that Dmitriev was targeted may well have been the work that he and the Memorial Society have done not only on publishing information about the victims of the Terror, but about its perpetrators. In today’s Russia there are those who strongly resist such moves and, unfortunately, those willing to take part in judicial travesties of justice.

Among the ever-increasing number of prominent Russians and people from other countries speaking out in Dmitriev’s defence is writer Ludmilla Ulitskaya.  In a powerful open appeal to prosecutor Yelena Askerova and judge Marina Nosova, she speaks of the “personal limit of fear, of pain and of shame” that each person has in their lives.

“All of Russian society is disturbed by the case of Yury Dmitriev and not only those people who are well aware of the almost 30 years of his heroic and noble activities. I assume that you as professionals cannot fail to realize how lacking in any evidence and fabricated are the charges brought against him. It is for this reason that all sane people have the impression that you are hostages to a difficult situation in which you are forced to act as obedient servants, and not as independent citizens able to tell the truth about a person who did not commit any of the things he is accused of. I could guess how greatly you are dependent on your superiors and how difficult it must be for you in a situation where they demand that you commit an act which can result in unpleasant consequences from the point of you or your future career.

Over recent years I have thought about how each person has their own personal limit [lit. border] of fear, of pain and of shame, and it is very important for a person to recognize these limits.

I am nonetheless turning to you in the hope of being heard. It is not only the fate of Yury Dmitriev, one of the worthiest and most heroic people of our time and in our country that is dependent on your personal honesty, your sense of personal dignity. It is also your reputation. The ruling you pass could be the stain that you will never be able to wash clean.  Your children will be ashamed of you and suffer just as do now the descendants of those butchers who executed innocent people during the 1930s.

Listen to what I am trying to say to you now. We all live just one single life.

I don’t know if in your hearts there is any flickering of faith in a Higher Court, in existence beyond the grave and in the idea of such kind of greater justice which is carried out beyond the limits of our earthly life.  That is not to mention the weight on your conscience that you will bear all the years that you live.

The next court hearing is on November 30.