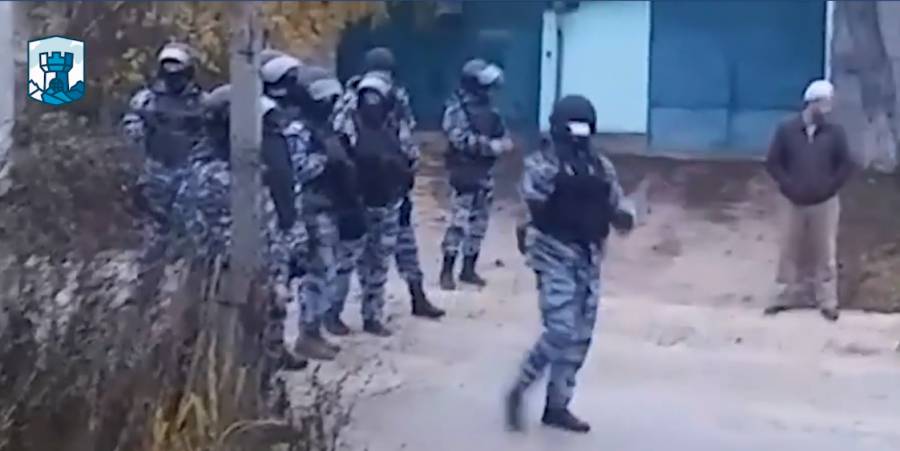 One Crimean Tatar activist has been jailed for a legal solitary picket last month, another fined and several subjected to armed searches and interrogation in a new offensive against the civic initiative Crimean Solidarity and all those trying to publicize rights abuses in Russian-occupied Crimea.   The moves come a month after the arrest and imprisonment of six Crimean Tatars, including prominent civic activists, on charges of ‘involvement’ in the peaceful Hizb ut-Tahrir organization which is legal in Ukraine.

The searches began, as always, very early on November 8, in Bakhchysarai; Stary Krym and the Simferopol district. Five men were targeted, all Crimean Tatar activists and members of Crimean Solidarity, the initiative launched by the relatives and lawyers of men imprisoned on politically motivated charges and / or for their faith.

Eldar Kantemirov; Ekrem Abdulvatov, head of the regional mejlis [self-governing body]; Alimdar (Ruslan) Belyalov and Khalid Belyalov were taken to the police station for interrogation after the illegal searches, but were eventually released.

Five Crimean Tatars who work for Alimdar Belyalov were also taken to police stations where an attempt was made to take fingerprints and DNA.  All five were later released.

Typically, in one case a large sum of money disappeared after the armed individuals carried out the search.  A report has been made to the police about this act of flagrant theft.

Seitumer Seitumerov is a well-known photographer, civic activist and member of the Crimean Solidarity initiative.  He also works as the administrator of the Salachyk Café, whose owner Marlen (Suleyman) Asanov was arrested on October 11.  Seitumerov was held in custody after the searches, and then taken before a de facto court who fined him 2 thousand roubles over a social media post.  The ‘court’ hearing was supposed to be open, yet only his close family were allowed to be present.

It was learned a little later that the enforcement officers had also carried out a search of the home of Crimean Tatar activists Abduraman Medzhitov.  He was taken away and later sentenced to 15 days administrative arrest, reportedly in connection with a single-person picket which, even under the repressive restrictions Russia has imposed on peaceful assembly, is legal.

As reported, over 100 Crimean Tatars, including some quite elderly men and women, held single-person pickets on October 14 in various parts of Crimea.  Each held a placards with messages such as: “Crimean Tatars are not terrorists.  Give children their fathers back” and “Fabricating criminal cases – it’s this that’s TERROR”.  Despite the totally peaceful and legal nature of their protests, 49 people were detained that day, and there have been repressive measures ever since with the FSB trying to find those it believes must be ‘responsible’.

The pickets were held three days after the armed searches and arrests in Bakhchysarai on October 11 which also targeted civic activists involved in Crimean Solidarity.  All six men are now facing charges of involvement in ‘Hizb ut-Tahrir’, which is not only legal in Ukraine, but is also not known to have ever committed an act of terrorism anywhere in the world.  Russia’s labelling of the organization as ‘terrorist’ has never been adequately explained and the authoritative Memorial Human Rights Centre recognizes all those convicted of such charges as political prisoners.

The same is true of the Bakhchysarai men arrested.  Seran Saliev, for example, has already faced administrative prosecution under Russian occupation first a fine for showing solidarity with victims of repression, then an 11-day prison sentence for a 2013 (pre-annexation!) social media post about a Hizb ut-Tahrir meeting.

This is all unconcealed persecution of civic activists by the Russian occupation regime, and a number of Ukrainian human rights groups have joined Crimean Solidarity in calling on the EU, USA, Canada and other countries to put pressure on Russia to stop such repressive measures.  They call also for tougher sanctions, and ask international organizations to both help safeguard the work of human rights monitoring missions in occupied Crimea and to put pressure on Russia and seek liability for those implicated in flagrant rights abuses.

The human rights activists once again stress that Ukraine’s government should ensure proper investigation of all such crimes and abuses, and ensure changes in legislation to provide protection and support for victims of persecution.