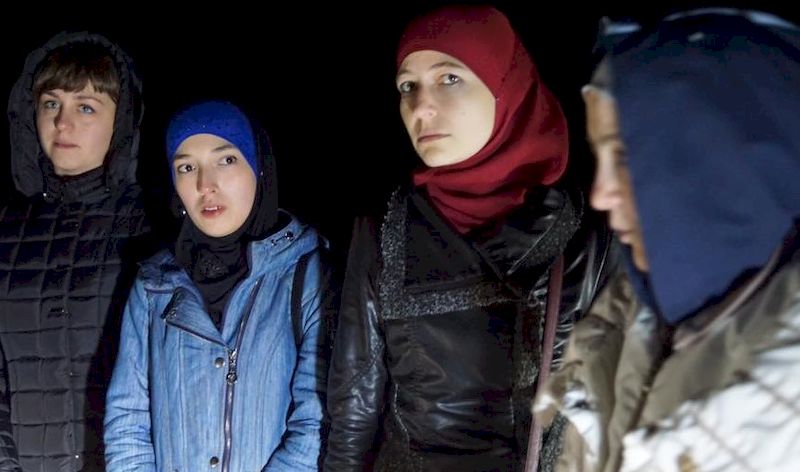 Russia is not content with illegally imprisoning 25 Crimean Muslims on unproven charges of involvement in Hizb ut-Tahrir, a peaceful organization that is legal in Ukraine, nor with leaving 100 children without their fathers.  It has now turned to terrorizing and intimidating the wives of seven political prisoners who were detained on November 8, illegally held for many hours by FSB-controlled officers brandishing machine guns and interrogated.  They were finally released late on Wednesday evening, but only after an ambulance needed to be called for one of the women.

The seven women: Alime Abdullaeva; Fera Abdullaeva;  Liana Bilyalova; Zaima Dzhepparova; Fatma Ismailova; Meryem Kuku and Huzal Salidinova were detained by Russian border guards at the Chaplynka-Armyansk crossing into Crimea.  They were returning from the Kherson oblast where they had gone to organize official documents for their children.

It is illegal to hold anybody for over three hours without providing grounds.  None was given, yet the women were held throughout the evening, with each subjected to a thorough search, with them told that this was for 'explosives' and other prohibited items.  Their telephones were taken away, with all contacts from them copied.

Lawyer Edem Semedlyaev arrived just before 23.00, together with journalist Anton Naumlyuk.  The women were released around an hour later.

Naumlyuk reports that the women were questioned separately and grilled about who their husbands and relatives are; what their parents live on; whether the women, all of whom have at least one young child, are planning to go and fight for the so-called Islamic State, why they had gone to Kherson and whether they’d met anybody there who could have infringed the law.

Thankfully the women were not forced to spend the night in custody.  Their children have been through a great deal of trauma over the last year or year and a half.  As well as being terrified by armed searches and the effective disappearance of their fathers, at very least human rights activist Emir-Usein Kuku’s children have also themselves been harassed by the FSB.

According to Naumlyuk, by late evening a number of relatives of the detained women and journalists had begun gathering.  The police began stopping people because they reached the administrative border and a car was stopped in Krasnoperekopsk with the officers claiming that the driver was under the influence of alcohol.  Since a test on the spot did not provide the result the police wanted, those detained were taken to hospital for drug and alcohol intoxication tests.

All of this came after still further armed searches and open intimidation of civic and human rights activists (see: Russia wages major offensive against Crimean Tatar civic activists in occupied Crimea ).  Like the men arrested on October 11 and the men targeted on November 8, most, if not all, the wives detained on Wednesday evening are active members of Crimean Solidarity.

The most chilling method that Russia is using to try to silence dissent and deter Crimean Tatars from showing solidarity with victims of repression is demonstrated in the latest arrests on charges of involvement in Hizb ut-Tahrir.  A number of the men arrested on October 11 this year are people active in Crimean Solidarity, the initiative launched by the families and lawyers of Crimean political prisoners.  For solidarity and attempts to ensure that people learn of the abuses in Crimea, the men could face 10-15-year sentences or more.

Russia is now openly trying to prevent this through further detentions, arrests, and the threat of long-term imprisonment.  For the moment, they are failing, with the numbers of those willing to come out in protest not reduced.

All the events of 8 November were brazen and warrant strong reaction from the international community.  Silence in the face of such abuses will only convince Moscow that it can cross all red lines with impunity.

25 Crimean Muslims imprisoned on Hizb ut-Tahrir charges, most of whom are Crimean Tatar