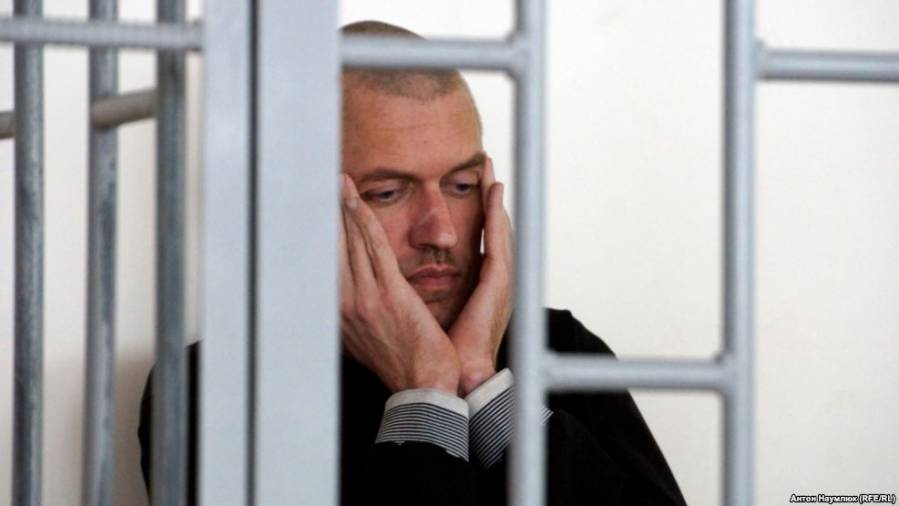 Having driven Ukrainian historian Stanyslav Klykh close to insanity through torture, psychotropic drugs and a Kafkaesque ‘trial’, Russia is now placing the 43-year-old’s life in danger.  His mother reports that, instead of providing her son with proper diagnosis and treatment, they injected him with some unidentified medication which left him virtually in a coma for six days.  It is increasingly clear also that physical methods of torture did not end after Russia finally admitted to holding Klykh in custody, 10 months after he disappeared in August 2014, having gone to Russia, or so he thought, to visit a woman he’d met earlier in Crimea.

Tamara Klykh recently spoke about her first visit to Stanyslav since he was sent to a Russian prison camp.  She found that he had lost a huge amount of weight, and at 1.9 metres weighed only 70 kilograms.  It seems that this was from the month he spent in a psychiatric clinic.

According to his mother, Klykh had felt very bad in prison and seemed to have tachyarrhythmia, or an excessively high heart rate.  He  applied to be hospitalized for a proper examination, but was instead placed in a psychiatric clinic.

He was given no explanation as to why, nor was he told what the three injections they gave him were for.  They turned him into a cabbage, he says, unable to understand anything, and adds that he wouldn’t last another stay in such a ‘psychiatric clinic’.

He developed bed sores on his legs while in the clinic which are not being treated and are not healing.  He sleeps on the floor as he says that the mattress springs poke into him and aggravate his sores.

He is obviously in a very disturbed state, however, and does not sleep much, but simply paces his cell.  He is there alone, and the isolation can only exacerbate his state.

There is, however, another side to this.  Klykh’s mother recounts how he was beaten by other prisoners while held in the Grozny remand prison, with the specific cellmates quite likely chosen for this purpose.

It is possible that the prison authorities are themselves concerned about Klykh’s state.  Tamara Klykh had been told that her son was only allowed visits twice a year, with these of just two hours, through a glass wall, then suddenly they gave a three-day visit, where the two could be together all the time.

He is kept in an information vacuum, and clearly does not receive all the letters sent to him.  Letters from Canada and France have reached him, but few from Kyiv, which could be because the latter are being withheld.  For a long time, the prison administration prevented Klykh from having anything to write letters with himself.

Klykh’s parents have been through hell over the last three years – as has their son.  He arrived in Oryol, Russia on August 7, 2014 to visit a woman he’d met in 2013.  He disappeared the very next day and was held in Russian detention for 10 months totally incommunicado, before being put on trial on surreal charges.  The ‘girlfriend’ vanished.

Five months earlier, Mykola Karpyuk, deputy head of Right Sector and member of the older Ukrainian National Assembly – Ukrainian Peoples’ Self Defence (UNA UNSO) had been tricked into coming to Russia.  He was held incommunicado from March 2014 to the eve of his ‘trial’ in October 2015. Klykh had been fleetingly a member of UNA-UNSO while at university, but had long become disillusioned with politics.

This tenuous link was enough for the FSB who held both men without access to real lawyers or family.  Subjected to unendurable pain, the men provided ‘confessions’ to killing soldiers and committing atrocities in Chechnya  from December 1994 to January 1995, although neither had set foot in Chechnya and Klykh was taking university exams at the time.  Both retracted all such ‘confessions’ as soon as they were allowed proper lawyers, and have both recounted similar harrowing accounts of the torture applied:  beatings, electric shock, psychotropic drugs, and more.

This cynical attempt at a ‘nationalist’ show trial has been described by Zoya Svetova, a prominent human rights activist as Russia’s “most monstrously falsified trial”.

Klykh has told his mother that he was beaten mercilessly to get him to sign a ‘confession’ claiming that he was in Chechnya together with former Ukrainian Prime Minister Arseny Yatsenyuk and head of Right Sector Dmytro Yarosh. He says they tortured him so that he didn’t want to live.

The renowned Memorial Human Rights Centre carried out an analysis of this case.  It found that the confessions were not just refuted by the men’s alibis, but by historical fact.  The killings had either not happened at all, or had happened in a different place and with different weapons from those the investigators claimed (details here and here).

This was a political case with facts and alibis of no concern.  On May 26. 2016, the court in Grozny, Chechnya under Judge Vakhit Ismailov sentenced Karpyuk to 22.5 years, Klykh to 20 years.  The appeals were rejected.

Klykh’s lawyer Marina Dubrovina had expressed concern about Klykh psychological state very early on.  In January 2016, his behaviour in court was so disturbed, that the hearing was adjourned and a psychiatric assessment ordered. The so-called ‘psychiatrists’ found nothing wrong, after which Ismailov initiated new criminal proceedings against Klykh for supposedly ‘insulting the prosecutor’.

Russia is still using the torture and suffering inflicted on Klykh and Karpyuk in its cynical information warfare.  It has recently upheld the insane ‘arrest warrant’ issued on Yatsenyuk, based solely on ‘confessions’ extracted through torture and openly flouting the facts.

Stanyslav Klykh’s mental and physical state make intervention on his behalf critically important.  Please make this case known to psychiatric associations, politicians and the media in your country and ask them to help put pressure upon Russia before it’s too late.