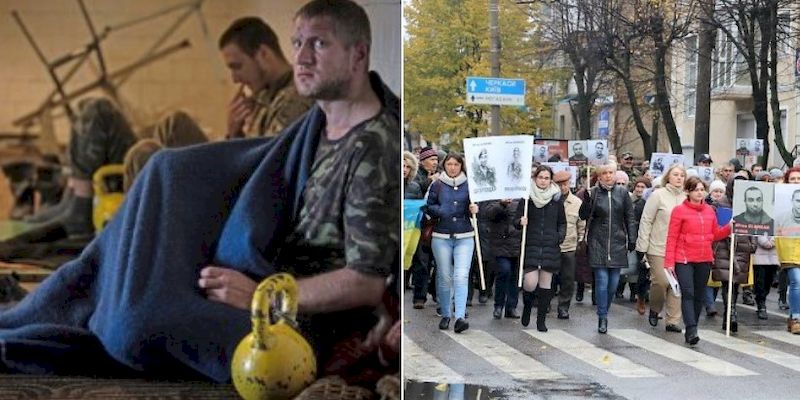 With the number of those Ukrainian hostages known already above 152, any movement in securing exchanges is to be welcomed.  Whether the reports from Moscow of ‘support’ for a large-scale exchange signify movement or just further tactical manoeuvres remains to be seen.  Families who have been waiting 1,000 days or longer for the release of husbands, brothers or fathers, have had their hopes dashed too often before and many of the hostages are facing their second or third cold and hungry winter in captivity.

There has been virtually no progress on securing exchanges despite the Ukrainian side’s willingness to agree to ratios bearing no relation to the “all for all” stipulated in the Minsk Agreement.

Viktor Medvedchuk, the controversial Ukrainian politician and close friend of Russian President Vladimir Putin, noted back in September 2017 that one of the problems is that the so-called ‘Donetsk and Luhansk people’s republics’ [DPR, LPR] have added people to the list of candidates for exchange who categorically refuse to return to Donbas.  Ukraine has also accused Putin and the Donbas militants of blocking exchanges by claiming that ‘all for all’ means exchanging civilian hostages and captured Ukrainian soldiers on the Ukrainian side’s list for a list including people who have committed murders and other grave crimes.

Medvedchuk added that the Ukrainian side was looking for 144 people in ‘DPR & LPR”, but had only established the whereabouts of 87 hostages.  That figure is now officially 152, however it is unclear whether this includes people whom the Donbas militants have refused to add to the exchange list.  ‘DPR’ has claimed, for example, that Ihor Kozlovskyy, a 64-year-old academic and advocate of religious dialogue,  is a ‘DPR citizen’ and should not be on the list.  It is unlikely that the ‘republics’ are willing to add the ever-increasing number of Ukrainians supposedly ‘convicted’ and sentenced to 10 or 20 years’ imprisonment for supposed ‘spying’ for Ukraine.

It had been reported during the day on Nov 15 that Medvedchuk had spoken about a possible exchange with Putin during a visit to a Russian monastery.  He told him that Ukraine was willing to release 306 people asked for by ‘DPR / LPR’, in exchange for 74 hostages or PoW.  Putin was supposed to have said that he would do “whatever depended on him”.  Most observers in Ukraine and in the West would view with scepticism the suggestion that there is anything that does not depend on the will of Vladimir Putin and his people.  The leaders of the so-called ‘republics’ take orders directly from Moscow, though the instructions received may include flouting Moscow’s apparent position.  This ploy was used, for example, over the so-called ‘May 11 referendum’.  With Russia funding and arming the militants, its leverage is effectively unlimited.

TASS announced on Wednesday evening that Putin had spoken with DPR leader Alexander Zakharchenko and LPR head Leonid Plotnitsky  They quoted the Kremlin’s press secretary Dmitry Peskov as saying that Putin had told them that he “supported Medvedchuk’s proposal for a large-scale exchange of people held on both sides”.   Peskov added that Zakharchenko and Plotnitsky had “on the whole supported this initiative”, but had claimed that it needed to be worked on further with representatives of the Ukrainian side.”

Among those watching closely to see whether this is really hope of release, or just more cruel imitation, will surely be the wives and family of Serhiy Glondar and  Oleksandr Korinkov.  On November 11, it was exactly 1,000 days since the two spetsnaz officers from Kirovohrad were taken prisoner while accompanying seven other Ukrainian soldiers who were retreating from Debaltseve.  Nine men altogether were fired upon.  Two were killed, two seriously injured.  The latter were soon released by the militants.  Another two were handed over after 50 days, and one managed to escape.  Korinkov and Glondar were clearly viewed as ‘trophies’ from a battle believed to have been directly ordered by Putin, with major use of Russian soldiers.

On November 11, several hundred people came out in Kirovohrad to show support for them and all the men held captive.

Kateryna Glondar spoke to Gazeta.ua about the conditions her husband is living in.  There are four in a cell together.  They have a so-called ‘walk’ each morning for two hours, though this is only around an internal courtyard with grating above their heads. The men are seriously cold, with many having only summer clothing despite the approaching winter.  They will be feeling the cold bitterly as there is not enough to eat, and their families’ parcels are ransacked before they reach the men.  From a 15 kilogram parcel, her husband wrote, he had received only socks and a toothbrush. In such conditions, their state of health will inevitably suffer, yet they do not receive medical care.

The men are totally cut off from the outside world, Kateryna says.  One of the prisoners does not yet know of the death of his child, another man’s mother has died of cancer without seeing her son one last time.

Photos from Gazeta.ua and the ACTION Association of Women, Kropyvnytsky