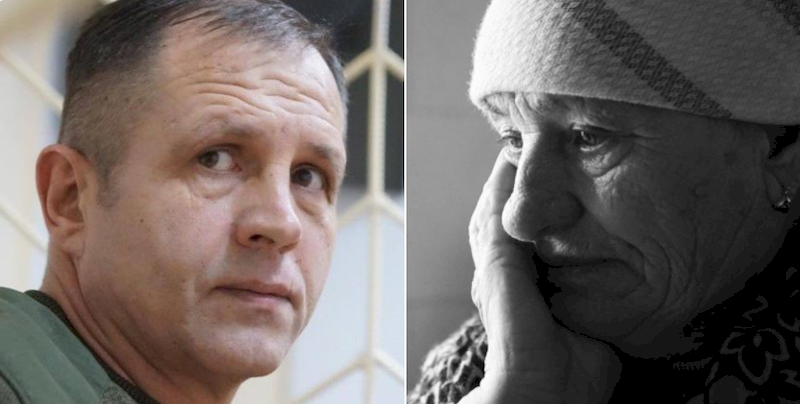 A court in Russian-occupied Crimea has yet again extended the detention of Volodymyr Balukh, despite the clear illegality of the move even according to Russian law, Balukh’s serious health issues and the fact that his elderly and nearly blind mother has been left without any support.  Russia’s revenge for the Ukrainian flag on Balukh’s home and his unwavering opposition to annexation is effectively unconcealed, with the lawlessness presumably intended as a warning to others.

Balukh has already been in detention for well over 11 months, despite the deeply flawed nature of the charges against him and the High Court ruling on October 2 which overturned his conviction and 3.7 year sentence.  He was recognized as a political prisoner by both Ukrainian human rights groups and the Russian Memorial Human Rights Centre within two months of his arrest, and the refusal to release him following the High Court ruling has been viewed as yet more proof of the political nature of the prosecution.

Balukh’s lawyer, Olga Dinze has no illusions about any possibility of an acquittal.  She says that the original sentence was revoked only because the defence complained to the High Court about the judge who had taken part in both earlier proceedings against Balukh, and in the case appealed.  The High Court therefore ordered a ‘retrial’, however the prosecution’s indictment remains the same, and Balukh is still imprisoned.

As Olga Dinze stressed during the court hearing on November 16, Balukh’s ongoing detention is in flagrant breach of Russia’s procedural law.  For offences of medium severity, a person may not be held in custody for over 6 months, and Balukh has now been imprisoned for 11 months and will have been in custody for well over a year after the latest 2-month extension.

Balukh himself spoke of the excruciating pain he is suffering in detention due to a serious medical condition which has been aggravated by the conditions in detention and by the failure to provide him with any medical care.  He said that he would regard the refusal to release him as evidence of deliberate action aimed at physically eliminating him.  The previous hearing had needed to be adjourned and Balukh taken to hospital, yet he was still returned to the detention unit.

The court cruelly raised people’s hopes by sending Balukh’s civil law partner running off to collect proof of ownership of her house and by asking his 75-year-old mother to also provide written confirmation that she owns her home and would be willing to have Balukh held there under house arrest.

It then proceeded to reject the application for his release, repeating the same old claims that Balukh could abscond or try to ‘influence’ the witnesses (the FSB and police officers who illegally searched his home!).

While Volodymyr says that he could not have acted any other way and that it’s better to die standing, than to go down on his knees, he is clearly tormented with remorse at the suffering he has caused his mother, and the fact that he is not there to help her.  Natalya Balukh is 75, can scarcely see and is in ill-health yet is now forced to tend to her small farm by herself.  The suggestion that Balukh would abandon her, if released from custody, is of quite shocking cynicism.

Volodymyr Balukh was arrested on Dec 8, 2016 after an unexplained search which allegedly found 90 bullets and several trotyl explosive devices in his attic.  He had no record of violence and the constant searches and harassment he had faced since Russia’s invasion of Crimea for his openly pro-Ukrainian position made it inconceivable that he could have held anything illegal in his home.  This was one of the reasons why the Memorial Human Rights Centre almost immediately declared him a political prisoner.

Other reasons included the timing.  Balukh was arrested nine days after he nailed a plaque renaming his home No. 18 “Heroes of Nebesna Sotnya St’ in memory of the over 100 Maidan activists who were killed during Euromaidan.  He rejected demands from the head of the local council to remove it. He had also continued to fly the Ukrainian flag over his home, despite harassment and a few absurd administrative court proceedings.

The case was so obviously fabricated hat the defence expressly warned the ‘judge’ Maria Bedritskaya that a judge can face criminal liability for detaining a man on overtly falsified charges.  She ignored the warning, herself illegally initiated the extension of his detention after the prosecutor forgot, and speeded up the predetermined conviction in order to go on holiday.

She paid no heed, for example, to the fact that the officer Yevgeny Bobrov who had allegedly found the ammunition could not explain either his role or his legal status during the search. He had not been on duty that day, and he could not name the individuals who had instructed him to be present or their position in the law enforcement bodies.   He was also unable to explain why he had removed the Ukrainian flag.

Balukh and his wife were prevented from seeing the supposed ‘search’ of their home. The ammunition which the men, wandering in some unclear capacity around the Balukh home, allegedly found, had no fingerprints or other traces to indicate that any member of the family had touched them.  Most important, the ammunition in question was on the official register of weapons and ammunition in Barnaul, the Altai region of the Russian Federation, and was produced back in 1989.  No attempt was made to explain how it had come into Balukh’s possession, not to mention why there was nothing to indicate that Balukh had ever come into contact with it.

This was at least the third ‘prosecution’ since annexation, with the others having been no less absurd.

Bedritskaya had taken part in one of those earlier ‘prosecutions’, and with this case too,, on August 3, she passed the three years and seven months sentence required of her and set off on her summer vacation. Judging by the detention ruling, the judge who is now hearing the case - Elena Anatolyevna Tedeeva  - is just as willing to take part in the imitation of a court trial, while executing revenge on a pro-Ukrainian activist in Russian-occupied Crimea.