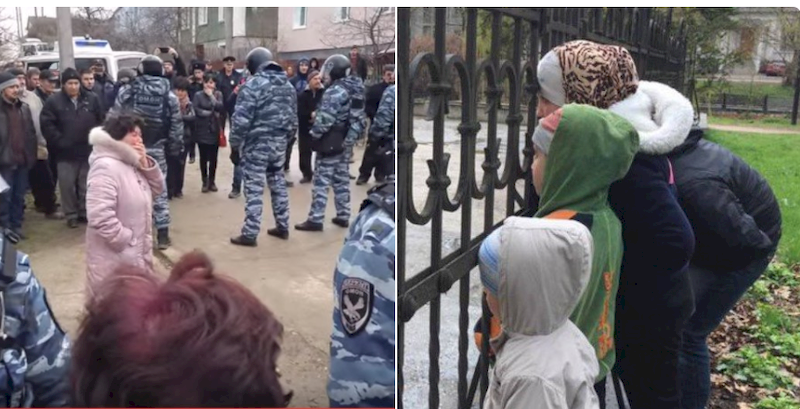 For FSB officers in Russian-occupied Crimea, armed searches, arrests and imprisonment of Ukrainian Muslims are the road to career success.  According to human rights expert, Vitaly Ponomaryov, Russia has used anti-extremism legislation to launch “a conveyor belt of political repression where you can be sentenced on the basis of spurious cases which have little in common with reality”.  And, as Crimeans are rapidly discovering under Russian occupation, this conveyor belt, “until it’s stopped, will demand more and more victims”.

Since the first four arrests in early 2015, 25 Ukrainian Muslims have been imprisoned on unproven charges of involvement in Hizb ut-Tahrir, a pan-Islamist organization which is not known to have committed acts of terrorism anywhere in the world and which is legal in Ukraine.  Russia’s Supreme Court once declared it ‘terrorist’, without providing a proper explanation or allowing the ruling to be appealed, and now regularly sentences men to 10, 20 years or even life on such spurious charges.

At the beginning of October, the FSB added another weapon to its arsenal in occupied Crimea with the arrest of four Crimean Tatars on charges of involvement in the international, apolitical and peaceful Tablighi Jamaat movement which Russia banned as ‘extremist’ in 2009.  Russian media reported that “three cells of Tablighi Jamaat had been eliminated”.  In fact, four Muslims, the oldest 64 and in ill health, were taken away after armed men burst into their homes early on October 2.  Three of the men are now in custody, while one appears to have agreed to

Ponomaryov heads a project monitoring ‘the fabrication of prosecutions for Islamic extremism in Russia’ for the renowned Memorial Human Rights Centre.  He describes Tablighi Jamaat as a Muslim devotional movement whose adherents do not concern themselves with political issues or internal disputes, but periodically travel to other regions or countries to encourage return to the roots of Islam.  While its adherents are persecuted in some post-Soviet countries, the movement enjoys support from the Muftiate in Kyrgyzstan.

Russia’s Supreme Court banned it as ‘extremist’ on May 7, 2009.  Although the ruling was never published, it can be found and is attached where people are accused of involvement in the movement.   In reporting the arrests on October 2, Russia’s state-owned RIA Novosti reported the Russian Supreme Court as having “ruled” that Tablighi Jamaat’s activities were aimed at “violating Russia’s territorial integrity and discriminating against citizens of Russia on religious grounds, as well as showing support for international terrorist organizations”.

Ponomaryov, in contrast, points out that the Supreme Court tried to justify the ban using unproven assertions, such as that the aims of the movement are “to establish world domination” and “universal Caliphate”,  it claimed that the movement “threatens inter-ethnic and inter-faith stability in society” and that Al-Qaida and the Taliban view it as “a resource base”.

The Supreme Court’s claim of a link between Tablighi Jamaat and terrorist acts in Uzbekistan was based on a falsified translation of an English-language publication.  The FSB had simply ‘added’ the incriminating words that were not in the original.

Any appeals against the ruling were fruitless, and the only change in such ‘anti-extremism legislation’ has been towards even harsher sentences. In this, Ponomaryov notes, Russia has now outdone Uzbekistan which is notoriously repressive.

‘Extremism’ is now so broadly interpreted, Ponomaryov adds, that expressing positive emotions about your faith can get you charged with propagating exclusiveness and supremacy, while if you talk about persecution of Muslims, even in a far-off country, you’ll be accused of ‘inciting enmity’.

Evidence that all of these bans are about politics, not law, is found in the fact that Hizb ut-Tahrir has been banned as ‘terrorist’, though the 2003 Supreme Court ruling in no way explains such a classification.  On the other hand, the 2009 ruling about Tablighi Jamaat claims it to have been implicated in terrorist attacks in several countries, yet does not call it ‘terrorist’, only ‘extremist’, with this carrying much lighter sentences.

What links Hizb ut-Tahrir and Tablighi Jamaat is the mechanism for prosecution.  In almost all cases, the indictment is based on questionable testimony of ‘secret witnesses’ and covert audio or video recordings which are given the interpretation required by FSB ‘experts’.

Ponomaryov says that he spoke of likely Hizb ut-Tahrir prosecutions back in 2014.  Now the FSB has added Tablighi Jamaat.  In a year or so, they’ll add some other real or mythical organization. This is how they make their careers, and in most cases they don’t bother even trying to prove the supposed calls to violence or overthrowing the regime.  The focus is purely on proving that somebody belongs to the real or mythical organization.  The ‘evidence’ provided is sometimes absurd.

Ponomaryov recalls that in one of the ‘Tablighi Jamaat cases’, the so-called expert acknowledged that there was nothing radical in the sermons that had been covertly recorded, but claimed that the fact that the person regularly went on such missions and that certain words from Urdu were used were ‘extremist’.

This is grotesque, only anything but funny given that the FSB forced a retrial then a prosecutor’s appeal until they got a 15-year sentence for Ruslan Zeytullaev, a 31-year-old father of three.  The sentence, Kurbedinov pointed out, was needed for their paperwork.   The conveyor belt prosecutions are all template-like, requiring one ‘organizer’ and three or more ‘recruits’.  Had the original sentence, which found no evidence that Zeytullaev had ‘organized’ anything, stood, the FSB would have faced unpleasant questions from their bosses.  No bonuses, no guaranteed promotion in reward for ‘terrorist convictions’…

While the FSB did not challenge the ‘lenient’ (five-year) sentences of the men tried with Zeytullaev: Ferat Saifullaev, Rustem Vaitov and Nuri (Yuri) Primov, they have since started adding the charge of ‘planning to overthrow the government’, meaning that the other 21 men now in custody face much longer sentences.

Men convicted of involvement in Tablighi Jamaat (and acquittals are virtually unknown) face sentences of up to 10 years.

29 men are currently serving sentences or in indefinite detention, and this figure is rapidly increasing.  The last arrests were especially brazen, being of men who have taken part in Crimea Solidarity, the initiative set up to help families of victims of repression.

100 children are already growing up without their fathers.  Please help alert politicians and the media in your country and help to put pressure on Russia to stop such repressive behaviour.