Council of Europe will share responsibility for grave human rights violations if it gives in to Russia nowCouncil of Europe looks set to cave in to Russian blackmailJuncker should demand Russia stops its aggression, war crimes & repression, not an end to ‘Russia bashing’Record prison sentence for Christian faith in Russian-occupied CrimeaUkraine’s most malicious miscarriages of justiceShevchenko and Russia’s first Ukrainian political prisoner in occupied Crimea Protests throughout Ukraine following 7-year sentence against civic activist Serhiy SternenkoUkraine imposes sanctions on pro-Russian MP Medvedchuk & his wife. What about criminal proceedings?Russia reverts to worst Soviet times in reprisal sentence against historian of the Terror Yury DmitrievWho answers for Antonenko’s imprisonment if Ukraine’s trial over Sheremet murder collapses?Ukraine’s President Zelensky blocks three pro-Russian channels linked with MedvedchukPACE finalizes capitulation to Russia, while listing all reasons why this is appeasement Outrage as Ukraine’s Culture Minister allows synagogue to be built on graveyard at Babyn Yar Not just Navalny. EU sanctions needed over 18-year sentences against Crimean political prisoners New Russian offensive to deprive imprisoned Russian Historian of the Terror Yury Dmitriev of his lawyer Україна оскаржила повноваження російської делегації у ПАРЄApplication practice of Article 109 of the Criminal Code of UkraineApplication practice of Article 110 of the Criminal Code of Ukraine2020: There was no worse year in the realm of human rights after the Revolution of DignityBandera. An Invitation to a Calmer Conversation
• Topics / Politics and human rights
• Topics / Human Rights Abuses in Russian-occupied Crimea

Council of Europe will betray its human rights mandate by giving in to Russia, Mr Jagland 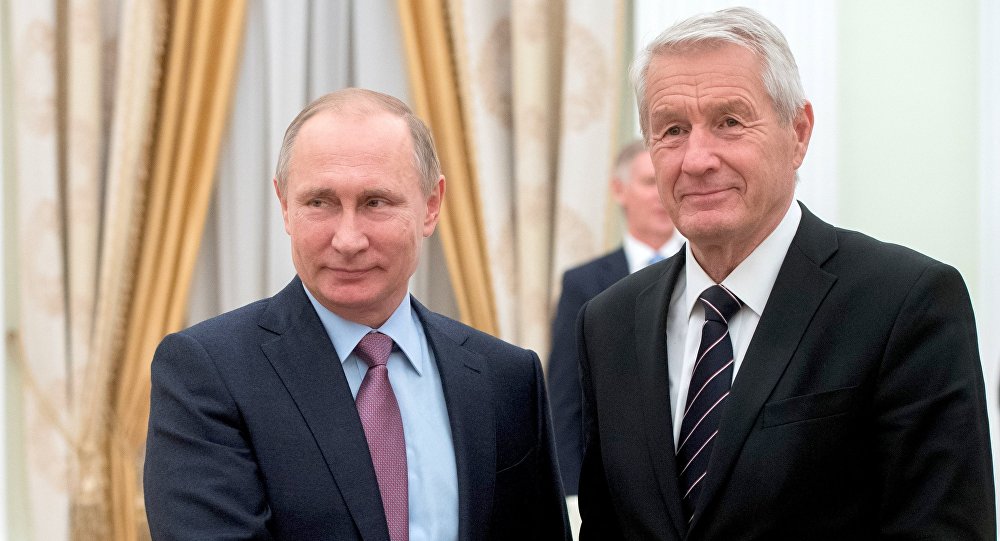 The Council of Europe is considering reinstating Russia’s voting and other rights which were withdrawn after Russia’s invasion and annexation of Crimea in 2014 and then its military intervention in Eastern Ukraine.  None of the conditions for the reinstatement of these rights have been met and Crimea remains under occupation with the ever-mounting human rights abuses making the reference given to the Council of Europe’s ‘human rights mandate’ as excuse for removing sanctions seem particularly disingenuous.

The situation is undoubtedly difficult.  In June 2017, three years after its voting rights at the Parliamentary Assembly of the Council of Europe [PACE] were stopped, Russia suspended its annual payment to CE, claiming this to be over the ‘crisis’ in PACE.  That was presented as an attempt to punish Russia for what was termed the “free expression of the will of Crimean residents to join Russia”, with Russian PACE delegates alleged to be facing “persecution”.  The statement only hinted at other consequences, including to its participation in the European Court of Human Rights, but this may have been spelled out in further detail during a telephone conversation between Russian Foreign Minister Sergei Lavrov and CE Secretary General, Thorbjorn Jagland.  It was also stated very bluntly on October 9 by Valentina Matviyenko, speaker of the Federation Council (upper house) and long-time associate of Russian President Vladimir Putin.  She threatened that Russia would not recognize European Court of Human Rights [ECHR] judgements “until conditions are created for the Russian delegation’s return to the Parliamentary Assembly of the Council of Europe”.

Since then there have been indications that Russia’s none-too-subtle blackmail may work, with a recent Financial Times article, directly quoting Jagland, strongly suggesting that he would be in favour of restoring Russia’s voting rights to keep them in the club.

FT reports that Jagland is “touring European capitals warning of a serious risk that Moscow could withdraw or crash out of the 47-member body unless its demands are met”.

“It would really be very, very bad if Russia was to leave . . . because the convention and court has been so important for Russian citizens,”  Jagland told them, and “a negative development for Europe, because we will have a Europe without Russia. It would be a big step back for Europe.”

The loss for Russian citizens of access to what is often the only court where they can hope for justice would indeed be enormous.  The loss to the Council of Europe’s credibility and to what Jagland calls its human rights mandate by caving in to overt blackmail would be disastrous.

The Secretary General did not mention the fact that Russia has already placed its compliance with ECHR judgements in question.  In December 2015, Putin signed into force a law which allows Russia to flout the ECHR by claiming that its judgements are in violation of Russia’s Constitution.

Russia has thus far only resorted to a Constitutional Court ‘ruling’ once, to enable it to not pay the two billion Euros in compensation it owed victims of its illegal seizure of YUKOS.  The excuse given by this ‘court; was that the ECHR had violated Russia’s Constitution by trying to force the government to pay a large amount of money that could instead by spent on domestic Russian needs.

Mr Jagland should not be under any illusions as to the Constitutional Court’s likely ruling over any of the multiple cases brought by Ukraine over Russia’s annexation of Crimea.

It should be noted also that, while not directly refusing to comply with ECHR judgements, Russia is simply flouting them.  There are numerous examples related to Ukrainian citizens held prisoner in Crimea or Russia.  Just one is the fact that Oleg Sentsov, Oleksandr Kolchenko, Ruslan Zeytullaev and many other political prisoners are being held thousands of kilometres from their homes.  This is in direct breach of an ECHR judgement (the Case of Polyakova and others vs. Russia).

There are numerous cases awaiting consideration by the ECHR regarding Russia’s torture, abduction, imprisonment, foisted citizenship, etc. of Ukrainian citizens.  It is very likely that Russia will find excuses to not comply with those judgements as well.

Given the criminal proceedings and real terms of imprisonment imposed for mere criticism of Russia’s invasion and occupation, the chances of cases actually reaching the Court in Strasbourg also seem remote.  Russia has in all seriousness charged Ukrainians like journalist Mykola Semena, Crimean Tatar leader Ilmi Umerov and Crimean Tatar activist Suleyman Kadyrov with ‘public calls to violate Russia’s territorial integrity’ for expressing the same position as that taken by the UN, OSCE and, yes, PACE.

All of this makes it difficult to take the following attempt to justify giving in to Russia seriously.  Mr Jagland says that he believes that Russia could leave ECHR and continues: ““Nobody wants to give a signal that we accept the annexation of Crimea. It is not about undermining this position of principle.  But . . . we have to keep in perspective: what is our mandate. Our mandate is to protect human rights in Russia and Crimea, or wherever people live on the continent.”

Russia is currently holding over 60 Ukrainians prisoner on politically-motivated charges or because of their faith.  This number is likely to rise, and, at least with the respect to the majority of Crimean Tatars and other Ukrainians in Crimea, it will, in all probability, refuse to comply with ECHR judgements.

Ukrainian Muslims living in Crimea have been forced to take Russian citizenship in order to keep their jobs, get medical treatment for their children, etc.  There are currently 25 Ukrainians convicted or facing huge sentences for unproven involvement in Hizb ut-Tahrir, an organization which is legal in Ukraine.  This is in grave violation of the Fourth Geneva Convention. It is as yet unclear how the Court in Strasbourg will respond in this case, or numerous other similar situations, but it can be guaranteed that Russia will reject any judgement which obliges it to respect the men’s rights under Ukrainian and international law.

Russia is also currently ignoring the International Court of Justice which has ordered it to withdraw its ban on the Mejlis of the Crimean Tatar people, and to stop discriminating against ethnic Ukrainians in Russian-occupied schools in Crimea.

Putin’s response to the preliminary conclusions from the Chief Prosecutor of the International Criminal Court that Russia’s annexation and occupation of Crimea are an international military conflict (and therefore within their jurisdiction) was swift.  A day after the report was published, he announced that Russia would not ratify the Rome Statute.

That petulant response was dismissed by leading legal experts as of no meaning.

This time, Russia is using blackmail.  The message if such tactics work is immensely cynical and very dangerous.  It would likely be used by Russia to then try to get other sanctions removed, and would tell other countries responsible of human rights abuses what they need to do to get the Council of Europe of their back.

In the meanwhile, Russia is continuing to abduct, arrest, imprison and often torture Ukrainians in Crimea and using all methods to crush dissent.  It will be given a carte blanche to escalate the violations, with its victims unlikely to have any recourse to justice.  That is an ill-used ‘human rights mandate’.

List with links to information about Ukrainians illegally held prisoner in Crimea and Russia here.

Giving in to Russia’s human rights abuses and their trampling on international Law should be met with rejection, not inclusion While they invade and annex Ukraine, Hold political prisoners, kill and torture political prisoners, Russia has no place in Europe. Russia behaves in a barbaric fashion and this is not to ever be accepted, nor are they to be members of Europe Russia does not respect Europe and does everything in its power to destroy EU and Democratic values Russia simply does not belong under these conditions