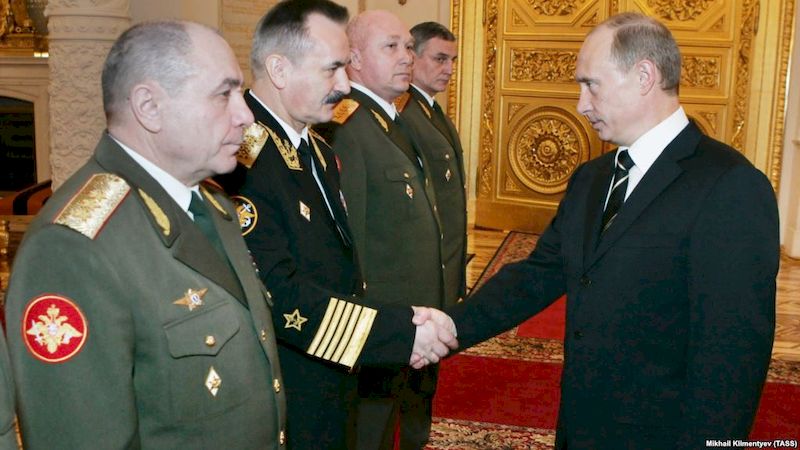 A respected international investigative group says it has identified a senior Russian general as a figure of interest in the downing of a civilian airliner over eastern Ukraine in 2014.

The Bellingcat investigative group -- which uses sophisticated digital techniques to analyze open-source audio and visual data -- issued a report on December 8 alleging that a man identified on intercepted communications as "Delfin" (Dolphin) is retired Russian Colonel General Nikolai Tkachyov, who is currently serving as the chief inspector of Russia’s Central Military District.

The Dutch-led Joint Investigative Team (JIT), which investigated the downing of Malaysia Airlines flight MH17 over eastern Ukraine and issued its findings in September 2016, previously published audio files of five intercepted communications between individuals identified by the pseudonyms Delfin and Orion.

The JIT is seeking additional information about the men, though it remains unclear what possible role they may have played in the downing of the airliner.

The JIT said in a December 8 statement that it "has taken note" of the Bellingcat report, but declined further comment.

MH17 was shot down over the conflict zone in Ukraine’s Donetsk region on July 17, 2014, killing all 298 people on board. The JIT concluded the plane was shot down from territory controlled by Russia-backed separatists with a Buk antiaircraft system that had been brought into Ukraine from Russia and was spirited back across the border shortly afterward.

The Russian government and the separatists deny responsibility and have offered several other theories about the tragedy. In July 2015, Russia vetoed a UN resolution that would have established an international tribunal to prosecute those deemed responsible.

Russia further denies any involvement in Ukraine’s internal affairs despite compelling evidence that Moscow has provided military, economic, and political support to separatists fighting Ukrainian forces in a war that has killed more than 10,000 since April 2014.

The Bellingcat investigation, conducted jointly with the independent Russian website The Insider, enlisted two independent research institutes to compare the intercepted communications, in which Delfin is referred to by the same first name and patronymic as Tkachyov, to recorded phone calls with Tkachyov made under the pretext of interviewing him for another story.

Both institutes -- one in the United States and one in Lithuania -- independently determined that it was "highly probable" that the same man was speaking on both recordings.

It remains unclear exactly what role Delfin may have played in connection with the conflict in eastern Ukraine or the downing of MH17. According to interviews with former separatist commander Igor Girkin, who is known by the nom de guerre Strelkov, Delfin was a high-ranking Russian commander stationed in the Ukrainian town of Krasnodon.

Girkin said Delfin was in charge of organizing disparate separatist militia units in parts of Ukraine’s Donetsk and Luhansk regions.

The 2016 JIT findings stated that the Buk antiaircraft system that shot down MH17 crossed the border into Ukraine near Krasnodon. Girkin said that he met with Delfin in Krasnodon in the middle of July 2014, around the time when MH17 was shot down.

Contacted in connection with the Bellingcat/Insider report, Girkin confirmed that a base was established in Krasnodon in early July 2014 and that there were "senior, retired [Russian] General Staff, experienced generals" there. Girkin said that Delfin was "some kind of general" who is no longer involved in the conflict in Ukraine.

Tkachyov told Bellingcat/Insider that he was not in Ukraine in 2014 and had not left the Urals city of Yekaterinburg since 2012.

Tkachyov, 68, is a decorated veteran of both Russian campaigns in Chechnya. He was released from military service in 2010.

After his retirement, however, he served in 2011-12 as a military adviser to the government of Syria. After his return, he was assigned to the Central Military District and based in Yekaterinburg.

In May 2014, he attended the Victory Day parade in Yekaterinburg. He appeared again in public in August 2014 at an event celebrating Orenburg Cossacks.