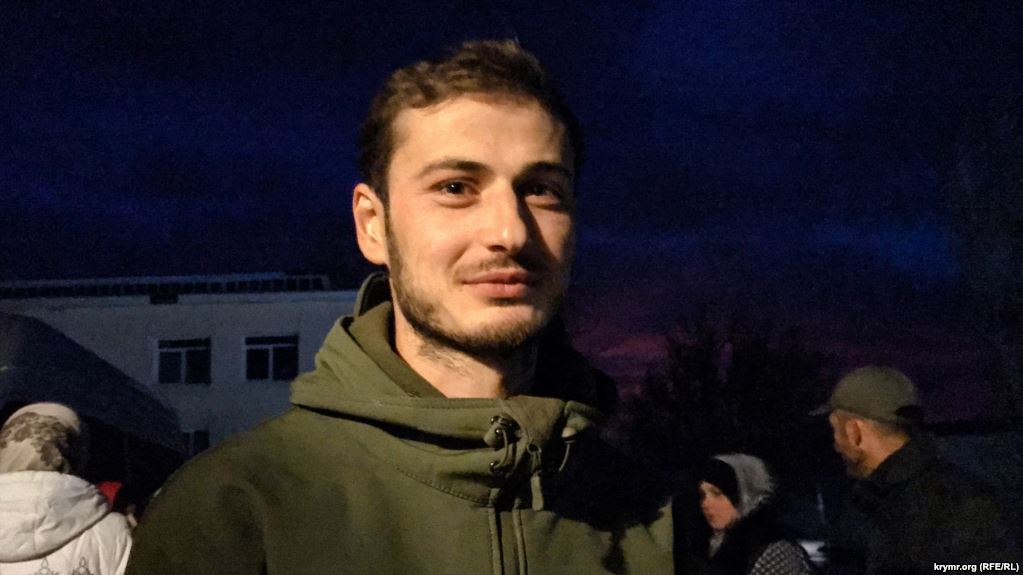 Rustem Osmanov, an activist from the civic initiative Crimean Solidarity, was taken from his home by unidentified men without insignia on Monday morning.  In comparison with at least three activists who are facing huge sentences for showing solidarity with political prisoners in Russian-occupied Crimea and their families, Osmanov was ‘lucky’ in merely being fined 10 thousand roubles on trumped up charges. Even if no abduction this time was planned, it is likely that the uncertainty over many hours was aimed at terrorizing Osmanov and his family, following other such seizures that have ended in men being savagely tortured.

Crimea Solidarity learned from Osmanov’s mother that her son had been taken away early in the morning of December 11 from his home in Bakhchysarai by men who gave no indication of who they were, or where they were taking him.  It was later learned that he was being held at the Bakhchysarai police station.

Later that afternoon, he was fined 10 thousand roubles by the Bakhchysarai District Court for supposed involvement in an ‘unauthorized meeting’.

The prosecution claimed and the Russian-controlled, as always, accepted, that Osmanov was guilty of ‘infringing the established procedure for holding a mass event, leading to disruption to transport and / or pedestrians’ (Article 20.2 § 6.1 of Russia’s code of administrative offences).

He was alleged, together with other activists, to have blocked traffic or pedestrians during searches carried out at the home of another activist Seydamet Mustafaev.  Osmanov was represented by lawyer Rustem Kyamilev who says that the ruling was groundless, with the court simply using testimony from police and supposed witnesses used in other administrative cases.

The suggestion that it is the activists who blocked traffic is particularly absurd since the armed searches which Russia’s FSB increasingly carry out of Crimean Tatar homes are almost always accompanied by the cordoning off of entire neighbourhoods.

Russia is increasingly mounting repressive measures against the many Crimean Tatars who come out in solidarity with victims of such searches, and stream the proceedings onto the Internet.  Over the past year, there have been numerous mass detentions of people standing peacefully on the street following the events, with many later jailed for 10 or 15 days on similarly unwarranted administrative charges.

The last such mass detention came together with a much more aggressive offensive against activists from the Crimea Solidarity initiative which unites the families and lawyers of political prisoners, as well as others concerned about the ever-mounting number of victims, including 100 children, of repression.

On October 11, six Crimean Tatars were arrested and remanded in custody on charges of ‘involvement’ in the peaceful Hizb ut-Tahrir organization which is not only legal in Ukraine, but is also not known to have ever committed an act of terrorism anywhere in the world.  Russia’s labelling of the organization as ‘terrorist’ has never been adequately explained and the authoritative Memorial Human Rights Centre recognizes all those convicted of such charges as political prisoners.  Almost all the six men were to some degree involved in Crimea Solidarity, and all have young children – civic activist Timur Ibragimov’s youngest child was just three weeks old when he was arrested.

Marlen (Suleyman) Asanov, the man whom the FSB have designated the ‘organizer’ of a supposed Hizb ut-Tahrir group, was recently, and with good cause, declared Ukraine’s Volunteer of the Year.  Asanov had long been known for his generosity when people were in need, and he became very active in Crimea Solidarity, helping the families of political prisoners.  The father of four young children is now himself facing a huge sentence (20 years or more) on entirely fabricated charges.  The armed search of his home was reportedly carried out in particularly extreme mode, with drones overhead videoing the proceedings, the Internet blocked and lawyer Emil Kurbedinov prevented from entering the house.

The other five men - Ernest Ametov;  Memet Belyalov; Timur Ibragimov; Seiran Saliev and Server Zekeryaev are accused of ‘involvement’ in the alleged group and are also in danger of receiving sentences of from 10 to 20 years.

Asanov, Ibragimov and Saliev were all particularly active in Crimea Solidarity with Saliev having already faced administrative prosecution under Russian occupation first a fine for showing solidarity with victims of repression, then an 11-day prison sentence for a 2013 (pre-annexation!) social media post.