Council of Europe will betray its human rights mandate by giving in to Russia, Mr JaglandCouncil of Europe looks set to cave in to Russian blackmailJuncker should demand Russia stops its aggression, war crimes & repression, not an end to ‘Russia bashing’Ukraine imposes sanctions on pro-Russian MP Medvedchuk & his wife. What about criminal proceedings?Russia reverts to worst Soviet times in reprisal sentence against historian of the Terror Yury DmitrievWho answers for Antonenko’s imprisonment if Ukraine’s trial over Sheremet murder collapses?Ukraine’s President Zelensky blocks three pro-Russian channels linked with MedvedchukPACE finalizes capitulation to Russia, while listing all reasons why this is appeasement Outrage as Ukraine’s Culture Minister allows synagogue to be built on graveyard at Babyn Yar Not just Navalny. EU sanctions needed over 18-year sentences against Crimean political prisoners New Russian offensive to deprive imprisoned Russian Historian of the Terror Yury Dmitriev of his lawyer Україна оскаржила повноваження російської делегації у ПАРЄApplication practice of Article 109 of the Criminal Code of UkraineApplication practice of Article 110 of the Criminal Code of Ukraine2020: There was no worse year in the realm of human rights after the Revolution of DignityBandera. An Invitation to a Calmer ConversationAbducted, tortured and spending seventh Christmas in Russian solitary confinement A brief description of the KHPG strategic litigations in July–December 2020The practice of application of Article 111 of the Criminal Code of UkraineMPs challenged to fight Russian repression by adopting a Ukrainian political prisoner
• Topics / Politics and human rights
• Topics / Human Rights Abuses in Russian-occupied Crimea

Crimean Tatar leaders, the sister of Russia’s youngest Ukrainian political prisoner and prominent Ukrainian human rights organizations have warned the Council of Europe against compromising its own values by giving in to pressure from Russia.  There can be no grounds for reinstating Russia’s voting rights within the Parliamentary Assembly of the Council of Europe [PACE] while Russia continues its occupation of Crimea, military aggression in Donbas and escalating human rights abuse

As reported, the proposal to reinstate Russia has come only because the latter suspended its annual payment to the Council of Europe in June 2017 and is now threatening to end its participation in the European Court of Human Rights. CE Secretary General, Thorbjorn Jagland appears to be promoting Russian reinstatement, claiming that “we have to keep in perspective: what is our mandate. Our mandate is to protect human rights in Russia and Crimea, or wherever people live on the continent.”

It is fitting, therefore, that Mr Jagland and his colleagues should be hearing the position of those who have directly suffered human rights abuse under Russian occupation and who foresee only a sharp escalation in such violations if the Council of Europe gives Russia as occupying state such an effective carte blanche.

Akhtem Chiygoz was among the members of the Mejlis of the Crimean Tatar people who spoke at a meeting of the CE Committee of Ministers in Strasbourg on December 13.  His position, as expressed to Ukrinform, is entirely unequivocal.  Russia’s reinstatement would constitute “support for a terrorist state that has today unleashed bloody carnage in the east of Ukraine, occupied Crimea and is carrying out a policy of terror against Ukrainian citizens.  Supporting this would mean becoming an accomplice to this crime”.

Chiygoz spent almost three years imprisoned in Crimea on legally grotesque charges pertaining to a demonstration on 26 February 2014, over which Russia could not conceivably have jurisdiction. He was targeted as the highest-ranking member of the Mejlis, or self-governing body of the main indigenous people of Crimea, following Russia’s banishment of Mustafa Dzhemilev and Refat Chubarov.  The ‘case’ which is ongoing for five other men was overtly anti-Crimean Tatar and in breach even of Russian legislation, yet Chiygoz was sentenced to eight years’ imprisonment.  He was unexpectedly taken to Turkey in October, together with Ilmi Umerov, reportedly after the Kremlin agreed an exchange for two suspected state-sponsored killers in custody in Istanbul.   Both Chiygoz and Umerov are now among the large number of Crimean Tatars and other Ukrainians who have been banned or driven from their homeland.

Russia has also prohibited the Mejlis, and is flouting a clear order from the International Court of Justice to revoke the ban.  This is just one of many compelling reasons why the Mejlis has also addressed an appeal to PACE.  Appropriately enough, it quotes the Committee of Ministers’ and PACE’s own resolutions, including No. 2313 (2016) on Political Consequences of the Russian Aggression in Ukraine

The appeal continues: “We, the Mejlis, understand the pressure that Russia is exerting on the Council of Europe pursuing its goal. Yet, this pressure is incomparably lower than the pressure and the terror which the Crimean Tatar people experience daily from the occupying authorities. If Russia returns to PACE unconditionally, the Assembly and its members will share responsibility with Moscow for further abductions, arrests, imprisonments and torture in Crimea used to crush dissent and freedom”.  (see it in full below)

In an impassioned appeal to PACE, Olha Hryb writes of her brother Pavlo’s abduction from Belarus and imprisonment in Russia on absurd ‘terrorism’ charges. The excuse that Russia should be reinstated to stop it leaving the European Court of Human Rights seems especially cynical given that Russia has ignored a clear directive from that Court regarding Pavlo’s urgent need for medication.  It has also illegally legislated ‘permission’ to refuse to obey binding ECHR judgements.

After causing the death of 83-year-old veteran of the Crimean Tatar national movement Vedzhie Kashka on November 23, during an incredible attempt by the Russian FSB in Bakhchysarai to arrest her, Russia is placing the life of two other men detained on that day, Bekir Degermendzhy and Asan Chapukh, in jeopardy.

The list can be continued.  The pace of such repressive arrests will, in fact, likely speed up if PACE gives in to blackmail and simply waives its sanctions against Russia.

A very large number of human rights organizations have issued an appeal to #SaveCouncilEurope.  They point out that the Council of Europe’s structure is based on three principles: human rights, rule of law and democracy, however warn that a process towards self-destruction has been triggered, linked with the blurring of the values on which the organization is based. This is evidenced in its willingness to tolerate flagrant violations of individual states within it. “This process could lead to the transformation of the Council of Europe into something of a hybrid institution, which declares commitment to values, yet in its internal processes, does not deem it necessary to follow them”.

One such example is clearly the attempt to reinstate Russia’s voting rights in PACE. The NGOs point to the important resolutions passed by the Council of Europe demanding that Russia release Ukrainian political prisoners, stop the persecution of the Crimean Tatar people, implement the Minsk Accords, etc.  Russia is ostentatiously ignoring all such demands, with the human rights situation in occupied territory only worsening.

The message from the Council of Europe’s willingness to turn a blind eye to ongoing violations and reinstate Russia would be disastrous at any time.  The move, if made, will come in late January 2018, shortly before the imitation Russian presidential elections which, it is already clear, will give Vladimir Putin his fourth presidential term.

This would be a resounding triumph for Putin and his policy of aggression against Ukraine and a grave moral defeat for the Council of Europe and everything it purportedly stands for.

See also:  Council of Europe will betray its human rights mandate by giving in to Russia, Mr Jagland 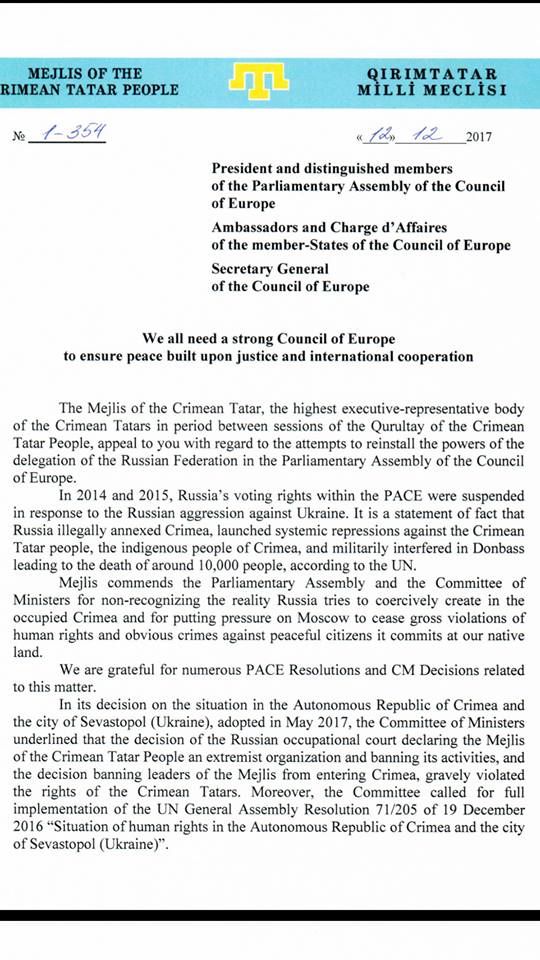 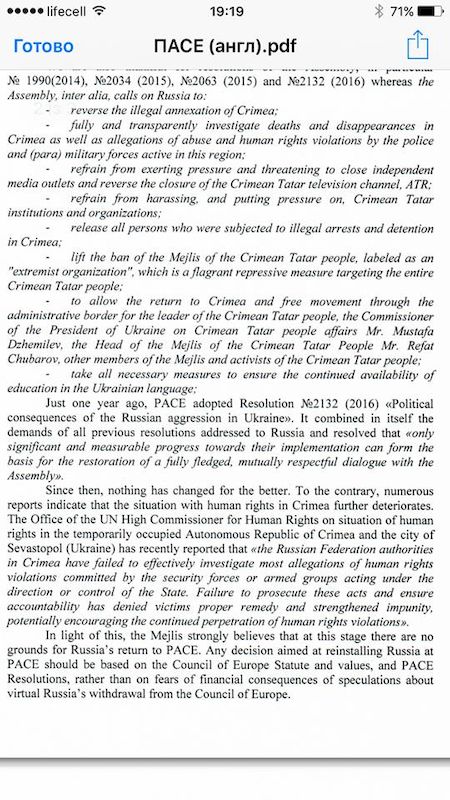 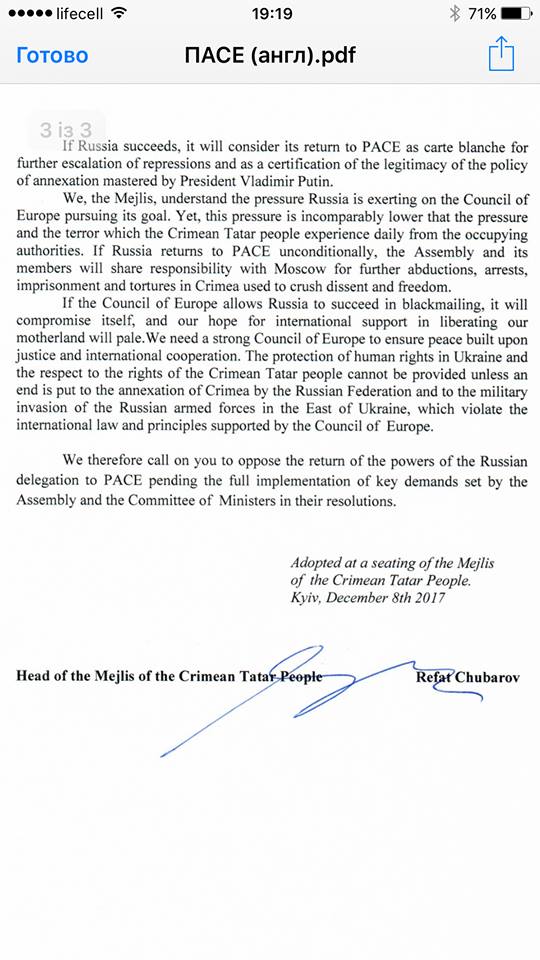