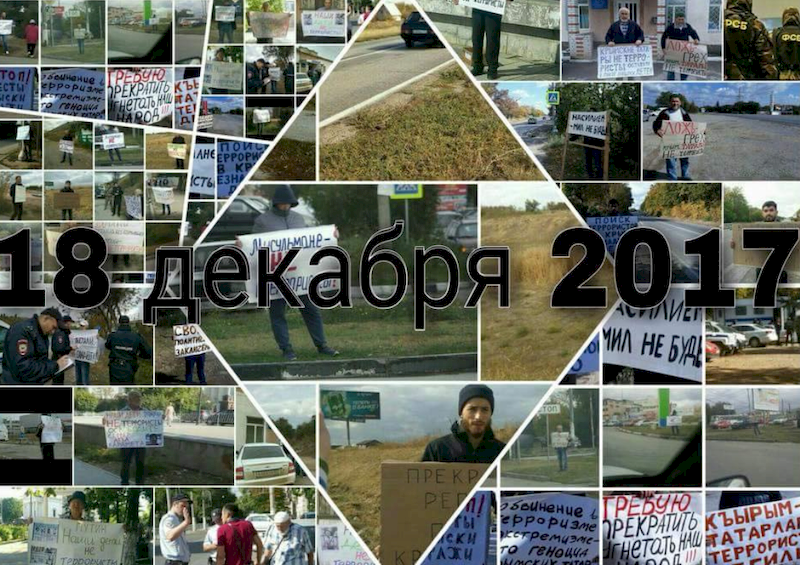 Courts in Russian-occupied Crimea have imposed 10 or 15 thousand rouble fines on 49 Crimean Tatars for solitary pickets in solidarity with victims of repression.  Other hearings on December 18 were adjourned, but their outcome is not in question.  In all, Russia will have extorted close on one million roubles from up to 86 Crimean Tatars whose protests were in full compliance with the occupying state’s draconian anti-protest legislation.

As reported, over 100 Crimean Tatars came out alone on October 14, in different parts of Crimea.  Each held one or two placards with messages such as:  “Our children are not terrorists!”;  “Give children their fathers back, Crimean Tatars are not terrorists!” and “Fabricating criminal cases – it’s this that’s TERROR”.    The Russian-controlled enforcement bodies detained 49 people that day, but eventually released them all which they would certainly not have done had there been any offence they could pin on them.

Later, however, the FSB began summoning individual activists for interrogation, demanding to know who had ‘organized’ the pickets.  The administrative proceedings brought were under Article 20.2 § 5 of Russia’s criminal code, for supposed infringements of the rules for holding a picket.  The argument applied is that since there were many such pickets, then together they constituted an ‘unauthorized public event’.  As Ilmi Umerov, Crimean Tatar leader and himself a victim of political persecution, notes: “It turns out that if there are several INNOCENT people, then they’re GUILTY. This is the logic of occupiers and bandits.  The law is meaningless.”

Prominent Crimean Tatar rights lawyer Emil Kurbedinov points to the real sign of “a single intent and organizer”, and that was in the mass nature of the court hearings on one day.  Were they hoping to prove that there would not be enough lawyers and people showing solidarity for all the victims?

If this was the “single intent”, then it failed.  Kurbedinov notes that “like on the day of the pickets, the persecution has once again united the people.  So many court hearings on one day will probably resulted in the emergence of a new human rights movement – ‘the group of 86’.  86 people are on trial today for peacefully expressing their views!”  He promises that there will be that many appeals.

“You want and simply long to crush the popular movement and drive everybody into different corners!  You have miscalculated!  Today 86 people will prove that and we will cope with the fines as one people, as we did before.  The Crimean Marathon is continuing! “

The Crimean Marathon arose after Russia began adding crippling fines to its arsenal of repressive measures against Crimean Tatars and other Ukrainians in occupied Crimea.  As well as imprisoning 76-year-old Server Karametov, who is frail and in very ill health, for 10 days, the same ‘judge’, Marina Vladimirovna Kolotsei fined him 10 thousand roubles, an amount beyond the elderly pensioner’s means.   (Details about how to show solidarity here.)

Our children are not terrorists

It may, or may not, have been coincidence that the mass court hearings were scheduled for 18 December, arousing associations for many Crimean Tatars with that most painful of anniversaries, the Deportation of the entire Crimean Tatar people from their homeland which began on 18 May, 1944.

The huge number of administrative proceedings and fines are a worrying escalation of repression against Crimean Tatars and are openly lawless.  Russia is in breach of international law by imposing its own legislation on occupied territory, but is even abusing its own laws through such arbitrary ‘interpretation’ of its rules on pickets.

The pickets on October 14 came three days after the latest armed searches and arrests of Crimean Tatars.  Six men, several of them activists from Crimea Solidarity, the initiative launched to help political prisoners and their families, were arrested on that day and are now facing fabricated ‘terrorism’ charges. Around 11 other men were detained and received large fines merely for having come out in solidarity and tried to video and photograph the searches and arrests.

Four other men had been arrested on October 2 on new charges for Russian-occupied Crimea, of supposed involvement in Tablighi Jamaat, a peaceful and apolitical movement which Russia has chosen to label ‘extremist’.

Many of the banners repeated the message on the placard held by Server Karametov before his arrest: “Putin, our children are not terrorists!”

Lawyer Lilya Hermedzhi is in no doubt that such measures are aimed at intimidating Crimean Tatar activists, at shutting them up so that there are no protests, no streaming of armed searches and arrests, no coverage of the human rights situation in Crimea.