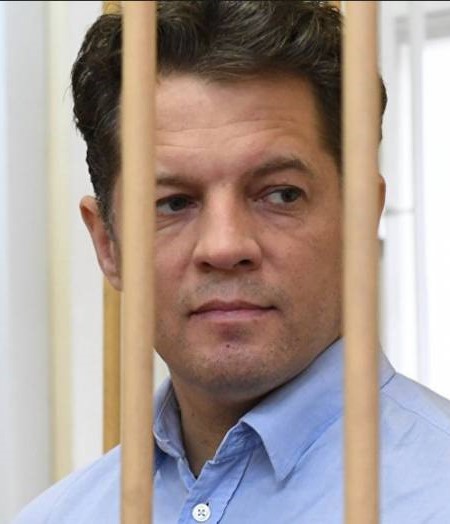 The news comes from Sushchenko’s daughter Julia who was informed that the panel of judges had declared her father a laureate of the award* on 10 December, International Human Rights Day.

Three days later, the FSB admitted that Sushchenko was in their custody and claimed that the Ukrainian journalist, who had been working as Paris correspondent for the past 6 years for the Ukrinform news agency was a colonel in Ukraine’s Military Intelligence.  They asserted that he had been gathering secret information about the activities of the Russian army and forces of the National Guard and that if this ‘information’ had been leaked abroad, it could have caused damage to the state’s defence capacity.  It was telling that on that same day, Russia’s Foreign Ministry concentrated on the fact that Sushchenko had not had journalist accreditation and claimed that he had had no right to engage in journalist activities.  All journalists who travel to Russia without accreditation should therefore, according to this logic, be warned that they should see nothing and ask no questions, just in case.

Russia has imprisoned well over 60 Ukrainians so far on politically motivated grounds, for their faith, etc..  By far the least ‘troublesome’ for the FSB are those linked with so-called spying since they can not only demand (as they almost always do) that the prisoners’ lawyers sign an undertaking not to divulge any details before the trial, but that nothing is ever revealed.

Mark Feygin, who has already represented other Ukrainian political prisoners (Nadiya Savchenko, Akhtem Chiygoz) reports that even acquainting himself with the material of the case is difficult since he has to read it at the FSB offices and cannot copy anything.  He therefore suspects that he cannot finish before the New Year, which may delay the anticipated January beginning of the ‘trial’.

This will take place behind closed doors, with Feygin predicting that Sushchenko could be sentenced to 20 years’ imprisonment with the charge being that the Ukrinform news agency correspondent “gathered information about an anticipated invasion of Ukraine by Russia in the summer or autumn of 2016.”

Feygin has previously indicated that it looks as though Sushchenko was ‘set up’, by being asked to take a disk back to Paris for another journalist.  The most disturbing aspect of this story is that Sushchenko had agreed to take the disk for a person he has known for 28 years.  Since he was arrested while receiving the disk, the person was almost certainly involved.

Feygin mentions that the 20-year sentence is if Sushchenko continues to deny the charges.  He has reported before that the journalist is being under enormous pressure to ‘admit’ the charges, with one of the methods used being effective blackmail over the sentence.  Ukrainian filmmaker Oleg Sentsov reported as soon as he was finally allowed to see a lawyer, almost a month after his arrest in Crimea, that he had been tortured and threatened that if he didn’t provide the ‘testimony’ demanded, he would get 20 years “and rot in prison”.  Sentsov refused and was indeed sentenced in August 2015 to 20 years for literally nothing.

Sushchenko has been imprisoned in the Lefortovo Prison in Moscow, with only a very small number of visits allowed from his wife Angela and adult daughter Julia and not one from his 11-year-old son Maxim.  The visits have been short, with Sushchenko held behind a glass wall and a guard present throughout.

*    The Sakharov Award for Journalism as an Act of Courage [«За журнализм как поступок»] was initiated by human rights defender and businessman Peter Vins, and the panel of judges is now headed by Garry Kasparov.