73 Ukrainian hostages welcomed home – over 160 still held in Donbas, Crimea & RussiaPutin ‘supports’ large-scale exchange of hostages held in DonbasDonetsk Pastor speaks out about Ukrainian Donbas’ struggle against Russian aggressionNurse held prisoner for revealing the Russian soldiers Russia claims are not in UkraineImprisoned in Russia-backed Donetsk ‘republic’ for not abandoning her elderly motherNurse ‘sentenced’ to 11 years in Russian proxy ‘Donetsk republic’ for remaining to care for her elderly motherA brief description of the KHPG strategic litigations in July–December 2020Criminal proceedings under Article 111 of CC of Ukraine against the journalistsRussia foists negotiations with Donbas proxies on Ukraine via fake Minsk Agreement roadmapAfter 7 years, Ukraine takes first step towards punishing for war crimesUkrainian hostages not forgotten but Russia understands only the language of ransoms and sanctionsThe price of PACE capitulation to Russia: Soaring number of Crimean Tatar and other Ukrainian political prisonersAfter 6 years of Russian aggression, Ukraine’s legislators think ‘it’s not the right time’ to punish war crimesWhy is Ukraine letting Donbas militant escape justice for Izolyatsia secret prison war crimes?Sushchenko & Aseyev: You helped get us released, now help imprisoned Crimean civic journalistsZelensky fires adviser who condemned legalization of Russian-controlled Donbas militantsНасильственные преступления, совершенные в ходе вооруженного конфликта на востоке Украины в 2014–2018 гг6 years of Russian aggression and war criminals whom Ukraine cannot prosecuteWho is behind the campaign to discredit Maidan and turn its victims into perpetrators?Accountability for international crimes committed in Ukraine between 2014–2018
• Topics / Politics and human rights

Freed Donetsk religious scholar: Many in Donbas want a return to Ukraine but are afraid 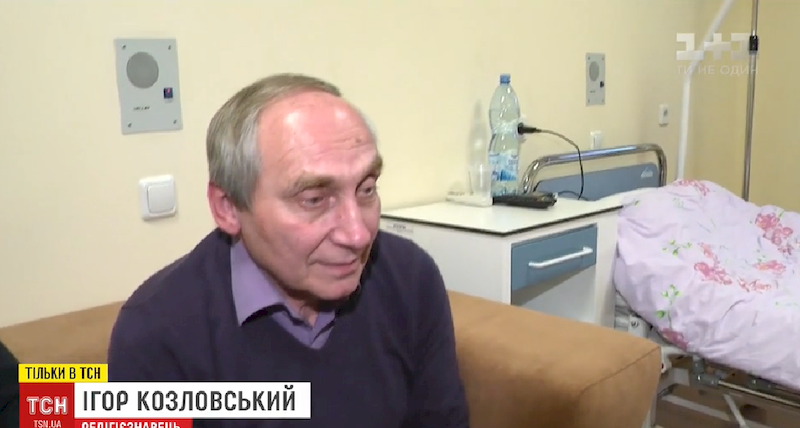 Renowned religious specialist and freed hostage, Ihor Kozlovskyy believes that many locals who once actively supported the self-proclaimed ‘Donetsk people’s republic’ [DPR] would now like a return to Ukrainian control, but fear that they could end up imprisoned unless an amnesty is passed.  Kozlovskyy was giving his first interview since his release almost two years after he was seized in Donetsk for his pro-Ukrainian views.

Kozlovskyy was speaking from a Kyv hospital room, where he, like most if not all of the 73 Ukrainian soldiers and civilian hostages freed on Dec. 27, is under medical supervision.  He hopes to be home by the 31st when his elder son Sviatoslav (Slava) has his birthday.  It was because of Slava, who is paralyzed from the waist down and has Down Syndrome, that Kozlovskyy had remained in Donetsk after the Russian-backed and armed militants seized control.  The young man was left totally alone in the flat after the so-called ‘DPR ministry of state security’ took his father away, and for almost two years could not understand why the person closest to him was not returning.

The 63-year-old academic says that he was not especially ill-treated. His captors told him from the outset, when he was still held imprisoned in a basement, that they knew about his pro-Ukrainian views, and that they weren’t going to waste their time trying to change them.  He was treated reasonably in the prison colony (where he was sent after his ‘conviction’ for two grenades supposedly ‘found’ on a bookshelf in the flat he shared with his wheelchair-bound son).  He was, however, not allowed a telephone to ring his family, and was kept from communicating with other prisoners, to avoid him having an influence on them.

He notes that one of the accusations from the militants was that all his students had been pro-Ukraine.  He responded by saying he was glad to hear it!

He wrote and read a great deal, and did yoga and other exercises to keep himself sane. He was also aware of, and grateful for, the support received within Ukraine and abroad.

He makes it clear that the lack of pressure is relative, after all prisoners are held in the basements of the SIZO [remand prison] where in Soviet times they held prisoners who’d been sentenced to death.

There are many people imprisoned there, he adds, because they don’t particularly agree with what is happening.

What Kozlovskyy also did, “as a researcher”, was to watch the television in the prison.  There were virtually no Ukrainian, only Russian or local (militant-controlled) channels.

“I watched them, as a researcher does, to understand the mechanism of exerting influence on people, of information warfare.  This mechanism and the methods of manipulating people’s consciousness are simple.  If there are no other products, people consume this product”.

Worth noting that the channels Kozlovskyy and others in areas under ‘DPR’ control saw would almost certainly have presented a very distorted image of the Ukrainian authorities and armed forces.  In 2014 human rights monitors visited Sloviansk and surrounding cities a few months after the forces under Russian ex-military intelligence officer Igor Girkin fled.  They reported that, after several months of relentless propaganda, the residents of Krasny Lyman had been terrified of ‘purges’; arrests; repression from the Ukrainian armed forces. However the ‘purge’ was confined to a simple viewing of flats, without even checking documents, and the first day of Sloviansk’s liberation began with free sausages being handed out.

Kozlovskyy had spent a year and a half in militant-controlled Donetsk before being taken prisoner.  He never concealed his pro-Ukrainian position and took an active part in the Prayer Marathon in which Ukrainians of different faiths met together in the centre of Donetsk to pray for peace under a Ukrainian flag.  This became increasingly dangerous, as was any expression of support for Ukraine.

While Ukraine’s SBU [Security Service] report that 103 people are still held prisoner in the two self-proclaimed ‘republics’, the figure may be much higher.  DPL ‘leader’ Alexander Zakharchenko recently said that in 2017 alone they had ‘arrested’ over 150 people who he claimed to be linked with the Ukrainian security service”.   Those accused of or ‘convicted’ of spying, sabotage or ‘treason’, include people like journalist Stanislav Aseyev (not yet released) and many others whose ‘spying’ was either fictitious, or another word for expressing a pro-Ukraine position.

Kozlovskyy also tells the chilling story of one man who was seized by the militants simply because he had let a flat to a person who was accused of ‘spying’.  The man was held with Kozlovskyy in the SIZO basement, and then told that he would be imprisoned for life.  He hanged himself.

Many of Kozlovskyy’s encounters during his captivity were with people who had supported the militants.  He says that if you analyse the situation, “the majority of those who fought in 2014-15 are now in prison colonies, under various charges.  Most on falsified charges, with something having been planted on them, or for crimes really committed – theft, robberies, etc.”   You get the impression, he says, that this is the policy, that there is a deliberate rewriting of history. “That’s what happens in history – there’s a revolution, and then they destroy those who made it”.  Some of the supporters, like Russian propagandist Roman Manekin, finally released after being held in a basement and tortured, seem to hold on to their illusions.  Others have probably had enough of this DPR experiment and hanker after the life they had before, but are fearful of arrest for their part in the events.

The issue of an amnesty law arouses extremely strong emotions and heated debate in Ukraine.  The reasons are clear, though both Russia which has pushed for this law and others, and those in Ukraine who oppose any conciliatory moves ignore the fact that no amnesty would apply for war crimes.

Kozlovskyy was speaking less than a day after his release in response to a wide range of questions, and did not go into detail.  It will be important over coming months to hear his experience and that of the other released prisoners regarding the situation in Donbas and their view of what is needed.  Kozlovskyy was doubtless suspect to the Russian-backed militants both because of his pro-Ukrainian views and his work promoting inter-faith dialogue.  Now, asked about his plans for the future, the scholar mentioned first “our common task”, namely to secure the release of all those held prisoner, and then the need to promote dialogue.

“All wars end”, he says, - “People have got tired – we have become weary, and they also.  We need to begin dialogue.  There is dialogue there, but it’s political, and it’s necessary to speak with people. On a public, civic level.  We need to find something in common, and must do that”.