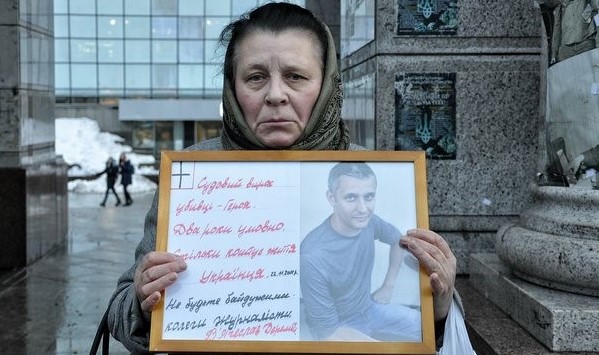 Public anger remains high over the extraordinarily light sentence passed on Yury Krysin for his role in the savage killing of Maidan journalist Viacheslav Veremiy.  Details about the judge’s role in persecuting Maidan activists and an apparent attempt to keep the ruling secret have only compounded suspicions that Krysin has protectors within the law enforcement system, and the appeal lodged by the Prosecutor General’s Office will be followed closely both in Ukraine and beyond.

As reported, the issue was not just the two-year suspended sentence handed down on December 22, 2017, but how the charges came to be so diluted.  It is noteworthy that Viktoria Deineka, the lawyer representing Veremiy’s mother had long predicted a suspended sentence.  Not, as judge Oleh Linnyk has claimed, because the indictment gave no option for any other ruling, but because he and others involved in the case appeared to have been systematically working to prevent a custodial sentence.

A number of media and civic NGOs have issued a statement, warning that the Krysin case is the result of an ineffective system of judicial liability.

They note that the day after Linnyk passed his suspended sentence on Krysin, he also released under house arrest two other ‘titushki’ or hired thugs accused of attempted murder of Maidan activists.   This was just several months after another judge released Vitaly Honcharenko, a former Berkut officer suspected of direct involvement in the killing of Maidan activists.  He was released from custody on April 6, 2017 and on April 13 crossed, unimpeded, into Russia, together with three former Kharkiv Berkut colleagues.

The authors stress that in each case, the rulings were passed by “discredited judges whose actions bore the hallmarks, not only of disciplinary misdemeanours,, but of crimes.”.  They assert that the structures who should have ensured that such judges were removed from the judges’ corps failed their task.

Linnyk is one of the ‘Maidan judges’ who passed wrongful court rulings against activists for a totally peaceful trip to Mezhyhirye, then the palatial and secret residence of President Viktor Yanukovych.  The case against him was terminated one and a half years later only because of a time limit on holding him accountable.

So too did five judges from the Kyiv Oblast Court of Appeal who unwarrantedly stripped Maidan activists of their driving licences.

On the eve of the verdict in the Krysin charge, a roundtable on disciplinary liability for judges heard harrowing details of how little liability there had been for knowingly wrongful rulings against Maidan activists and why.

The High Council of Justice has almost finished its consideration of disciplinary proceedings brought against Maidan judges.  Complaints were considered against 350 judges.  HCJ made applications for the dismissal of 64 judges, though only 37 were actually dismissed.

Serhiy Horbatyuk, the Head of the Special Investigations Department trying to bring Maidan cases to successful prosecution, told those present that the disciplinary proceedings had been sent to various prosecutor’s offices in Kyiv, Kyiv oblast and other areas.  They quickly sent shoddy material to the courts which were then all sent for revision to his Department which is not well-enough staffed to process such requests swiftly.

Horbatyuk mentioned also, and not for the first time, the resistance encountered from the judiciary.  In virtually every Kyiv court there are colleagues of the ‘Maidan judges’ in question, and they use formal pretexts to refuse applications from the investigators.  He suggests that in order to secure effective investigations, such cases should be passed to different oblasts.

The civic organizations, which include the DEJURE Foundation; Automaidan and the Democratic Initiatives Foundation, note that three Automaidan activists were recently charged over an incident where they hurled three eggs at a deputy from the Bloc of Petro Poroshenko.  They are now facing sentences of between 4 and 7 years’ imprisonment, while Krysin, who was involved in the brutal killing of Viacheslav Veremiy has walked free.   Such impunity can only exacerbate disgruntlement in society, radicalize opposition and erode confidence in reforms and in the government.

Oleh Linnyk has defended his ruling in the Krysin case, asserting that this was a fair sentence given the indictment presented.  He dismisses, for example, the fact that Krysin himself admitted that he had received 20 thousand USD to gather thugs, and says that the indictment mentions only hooliganism and light injuries.

The ruling claims that the titushki (whom Krysin got a huge amount of money for) were supposed to “carry out instructions from unidentified individuals to prevent protesters from reaching the centre of Kyiv” and that he had not known that some of the titushki, including the man whose shot caused Veremiy’s death, intended to use firearms.

Linnyk’s claims have been dismissed by many lawyers representing Maidan victims, civic activists and politicians.  Lawyer Vitaly Tytych says that there was an obvious conflict of interests for Linnyk, and that he had made use of various opportunities for manipulating the case, due to serious problems with both the pre-trial investigation and the indictment.  Linnyk’s colleagues at the Shevchenkisk District Court had resisted the attempts, one made by the prosecutor, to get him removed from the case.  Tytych asserts that Linnyk “clung on to the case with all his might” and that he had deliberately run the trial so that the timeframe for a previous parole sentence allowed him to ‘not notice’ Krysin’s criminal record.

There are many reasons for believing that Krysin is being protected by people within the law enforcement system, not least the way he has managed to avoid imprisonment despite a significant number of offences involving violence.

Linnyk’s four-year suspended sentence with a two-year probation period was far milder than the six-year term of imprisonment demanded by the prosecutor.  Although Krysin was known to have not fired the shot that killed the 31-year-old journalist, he had been the organizer of the gang of titushki whose brutal attack with baseball bats can be seen here.

There were numerous suspicious transformations in the case, beginning with the change in the original murder charge against Krysin to ‘hooliganism’ (Article 296 § 4 of the Criminal Code).

There was also, as mentioned, the persistent failure to notice other discrepancies in the case, and the fact that Krysin had committed serious crimes while supposedly on probation.  A prosecutor following the trial has suggested that Linnyk deliberately dragged it out, while others have noted the highly suspicious circumstances which led to Krysin’s original release from custody in 2014, and then the decision to hold the trial behind closed doors (details here).

There were protests in Ukraine after the ruling, and concern was expressed by various international media organizations, the EU and US State Department.  Judges hearing the appeal lodged by the Prosecutor General’s Office will be aware how closely observed their review of the case will be.

For the moment, however, there is nothing to indicate that a proper investigation is underway into the information revealed by investigative journalists about the case, and about those investigators, police and others who helped to minimize the charges and end up with what is very widely viewed as a total travesty of justice.