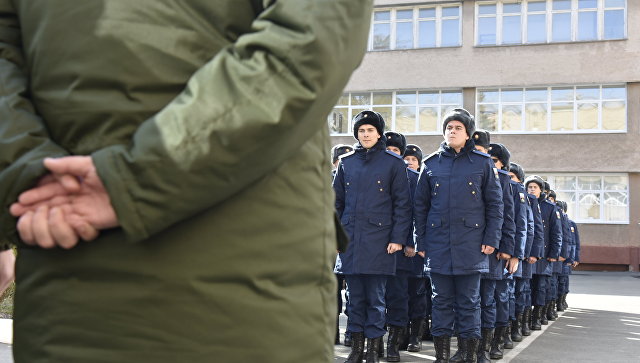 Russia is continuing to violate international law by conscripting young Crimeans into the army of an occupying state, and prosecuting those who refuse to do military service.  Conscription is also forming part of Russia’s mounting persecution of Jehovah’s Witnesses.

In reporting on a significant worsening in the human rights situation during 2017, the Crimean Human Rights Group notes that there was also a steep rise in the number of young Crimeans conscripted into the Russian Army.  From around 3,100 in 2016, the number rose to almost five thousand in 2017, with CHG estimating that since Russia’s invasion and annexation of Crimea around 10 thousand young men have faced conscription. Most worryingly, in 2017 for the first time, the occupation regime sent 645 young Crimeans to various military units in the Russian Federation

At least four prosecutions were initiated over so-called draft evasion, with three of the people found ‘guilty’.  Two were fined, and are still forced to do the military service.  With independent media effectively stifled in occupied Crimea, it is not possible to know what the men’s motives were.

All of this is in flagrant violation of the Geneva Convention relative to the Protection of Civilian Persons in Time of War.

Article 49 prohibits “individual or mass forcible transfers, as well as deportations of protected persons from occupied territory to the territory of the Occupying Power or to that of any other country, occupied or not”.

Russia’s attempts to deny that it is illegally occupying Ukrainian Crimea have been rejected by the UN General Assembly, OSCE, all European structures and democratic states.  Perhaps most importantly, the International Criminal Court concluded back in December 2016 that Russia’s actions since February 2014 constitute “an international armed conflict” which falls under its jurisdiction.

In June 2017, a Crimean Jehovah’s Witness was ordered to provide ‘proof of change of faith’ in order to be eligible for alternative civilian service.  The young man received a summons from the Bakhchysarai military recruitment commission dated June 14, with the document including a handwritten demand that he present “documents confirming change of religion”.

At the time, the Jehovah’s Witnesses reported that the lad had visited the office on June 9 and been told he could only do alternative civilian service if he renounced his faith.  The summons posted on the site was apparently one of two received, with exactly the same wording, and no indication as to which religion he was supposed to ‘change’ to.  It was also noted at the time, that a young Russian had been refused the right to alternative service with Russia’s shocking ban of the Jehovah’s Witnesses given as the excuse.

Although there have been no other such reports since, it is very likely that there will be, with Russia reinstating yet another pernicious tradition from Soviet (and Nazi) times, namely the persecution of people for their faith.

Serious concern is also warranted over the mounting militarization of Crimea society, and especially the involvement in this of children (see Children taught to glorify war and the invader in Russian-occupied Crimea )