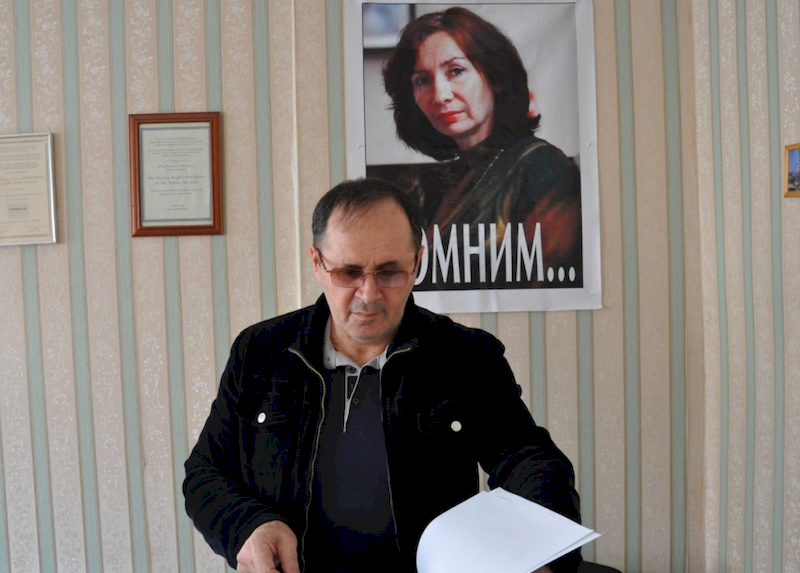 Oyub Titiev, head of the Grozny office of the renowned Memorial Human Rights Centre, has been arrested, with the devoutly religious 60-year-old lawyer accused of possession of narcotics.  Chechnya has become a dangerous place for human rights activists and journalists, and, if charges are laid, Titiev will be the third person, after activist Ruslan Kutaev and journalist Zhalaudi Geriev to be facing drug charges, after a substance “smelling like marihuana” was purportedly ‘found’ in his car.

Titiev became the head of the Chechnya branch of Memorial HRC after the brazen abduction and murder of Natalya Estimirova in 2009.

He did not appear at work on Tuesday morning, nor at an arranged meeting at 9 a.m. After waiting an hour for him, and fruitlessly trying to call him, the person he was supposed to meet went off in search of him.  The man twice passed by Tititev who was standing with about 5 or 6 traffic police officers and a police car.  Both times Titiev saw him, and motioned him to pass by without stopping.  It took many hours and intervention by members of the Human Rights Council under President Vladimir Putin to ascertain that the human rights activist was being held in the Kurchaloi Police Station.

Novaya Gazeta reports that he has been visited by Kheda Saratova, a member of the Human Rights Council under Chechnya leader Ramzan Kadyrov.  It was only with her arrival that Titiev’s lawyer was finally allowed to see the human rights activist.

The Central Police in Chechnya later reported that a package “with something having the specific smell of marihuana” had been found “during prophylactic measures”.  It states that the substance has been sent for testing, and that Titiev is facing a medical check, but does not, as yet, speak of criminal charges.  Titiev's lawyer has, however, spoken of charges under Article 228 of Russia's criminal code - the same used after the police claimed to have found similar 'packets' containing narcotics on Ruslan Kutaev in 2014 and Zhalaudi Geriev in 2016.

Saratova told Novaya that the 60-year-old does not have “any obvious signs of having been beaten” and that he rejects the allegation that the package with drugs supposedly found in his car belonged to him. So do all his colleagues and those who know him.  Katerina Sokiryanskaya notes that the 60-year-old “never misses a prayer and spends every evening in the gym” and says that “it would be more credible to accuse him of killing Napoleon”.

Credibility has, unfortunately, seldom been of concern for Kadyrov who has continued to have President Putin’s support, despite an appalling human rights record.  It was with reason that Memorial Head Oleg Orlov directly accused Kadyrov of responsibility for the murder of Natalya Estimirova and the only baffling element in the US’s decision to place Kadyrov on the Magnitsky sanctions list in 2017 was why it had not been done earlier.

The Memorial Society, and the linked Memorial Human Rights Centre have also repeatedly come under major pressure in Putin’s Russia, with attempts to dissolve Memorial only abandoned after international protest.  The Russian authorities have since used dirtier tactics, most notoriously the arrest in December 2016 of the head of the Karelia branch of Memorial and world-renowned historian, Yury Dmitriev.   The grotesque charges against him of ‘preparing child pornography’ were recently demolished, however the prosecution has now had him sent to the Serbsky Institute in Moscow for a ‘psychiatric assessment’.  It was clear from a 15-minute program broadcast within a month of Dmitriev’s arrest on the government-controlled Rossiya 24 TV channel, that this was part of an attack on Memorial, with the film’s authors having clearly collaborated with the FSB.

Memorial’s publication of 40 thousand former NKVD workers was published in 2016 and was widely reported in the international media.  Since then Memorial has been forcibly labelled a ‘foreign agent’ and Dmitriev arrested.  The Memorial Human Rights Centre had been labelled a ‘foreign agent’ even earlier, with the situation in Chechnya particularly critical.  Oyub Titiev had long received threats directly linked with his human rights activities, and there are no grounds for believing that this is not the latest attack both on him and those who speak out for victims of grave human rights abuse.