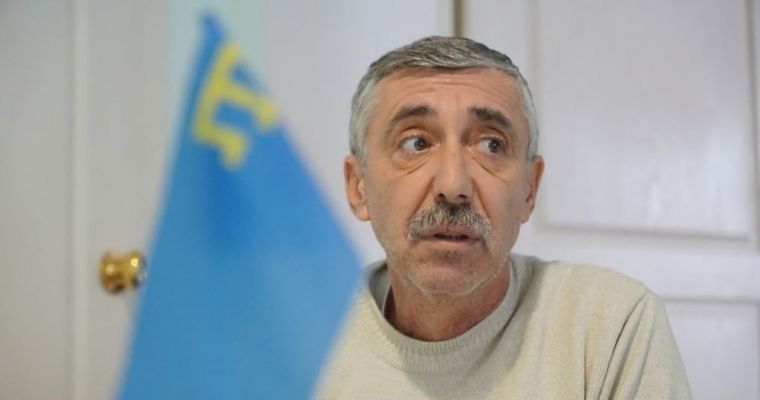 How do you flesh out the ‘trial’ of a Ukrainian prosecuted by the Russian occupiers of his homeland for writing on Facebook that ‘Crimea always was, and remains Ukrainian”?   A Russian-controlled prosecutor and court in occupied Crimea are trying to find something sensible to add to this grotesque ‘case’ and failing badly.

54-year-old Suleyman Kadyrov is the third Crimean to be prosecuted under an article of the Russian criminal code introduced shortly after Russia’s invasion and annexation of Crimea.  As feared, Article 280.1 is being applied to try to intimidate Ukrainians and Russians from stating a fact, acknowledged by the UN and international community, namely, that Crimea is Ukraine and illegally occupied by Russia.

The article claims to prosecute those who make ‘public calls to action aimed at violating Russia’s territorial integrity’.  It is, of course, Russia which is violating its territorial integrity, as set out in numerous international treaties which Moscow has not withdrawn from, however this in itself has not stopped Russian or Russian-controlled courts from using this article to jail people for saying that Crimea is Ukraine.  This third trial in Crimea differs from those against journalist Mykola Semena and Crimean Tatar leader Ilmi Umerov in that even the so-called ‘linguistic expert’ could not detect a ‘public call’ in the sentence ‘Crimea always was, and remains Ukrainian”.   According to Alexei Ladin, Kadyrov’s lawyer, there have been two such ‘expert assessments’, with neither finding any thing unlawful about Kadyrov’s actions.

That should have been grounds for the case to be terminated immediately but was not, and now Kadyrov is already on Russia’s ‘List of terrorists and extremists’ and is facing a possible 5-year sentence.

During the hearing in the Feodosia City Court on January 22, an FSB officer appeared as ‘witness for the prosecution’. Alexander Vishnya was there because he took part in ‘inspecting Kadyrov’s Facebook page’ on two occasions.  At the end of March 2017, this was over Kadyrov’s repost of a video from Demyan Demyanchenko which spoke of the creation of a volunteer Crimea battalion and asked for donations.  Then in July, he ‘inspected’ a comment on the same post by Kadyrov that he fully agreed with the author of the video clip and stated that ‘Crimea always was, and remains Ukrainian”.

Vishnya is allegedly a technical specialist who asserted to the ‘court’ that social media users are “technically not able to distinguish a repost or link from an author’s own post”.  This would surely be disputed by any Facebook user, since the person who originally posted the video clip is always visible, and Kadyrov is not disputing that the comment underneath the video is his.

A former colleague of Kadyrov’s was also questioned as witness for the defence, as were others who know him.  They all spoke positively of him, and said that while he never concealed his position that Crimea is Ukrainian in private conversations, he did not express this view publicly.

The ‘court’ has now turned to studying the so-called ‘case material’.  This includes protocols of interrogations which are identical, with the so-called ‘witnesses’ being people who have taken part in other political trials.  In the case of those questioned in court on January 22, their testimony differed from that in the protocol.

Kadyrov was only formally charged in October 2017, a full year after the original visitation by FSB and other enforcement officers, some with machine guns, on October 5, 2016.  Kadyrov had been told then that the search was ‘on suspicion of extremism’, with the warrant issued by judge Igor Rodionov over alleged public calls to deny ‘the borders of the Russian Federation’ and support the Crimean Tatar Asker Battalion.

Since the Facebook repost in question was from March 29, 2016, it is possible that the FSB witness was actually describing snooping from 2016, and not as he was reported, 2017.

The European Court of Human Rights has just become communication with the Russian government over the first prosecution under Article 280.1.  Russian Tatar Rafis Kashapov spent three years in prison for several posts criticizing Russia’s annexation of Crimea and aggression against Ukraine  (details both of the ECHR proceedings and of the innocuous posts can be found here).  It seems highly likely that Russia will be found in breach of the European Convention on Human Rights over that prosecution.  The situation in Crimea is even more evidently in violation of international law, since Russia, as occupying state, has no right to apply its legislation in Crimea, let alone in prosecuting people for sharing the position taken by all democratic states and international bodies.