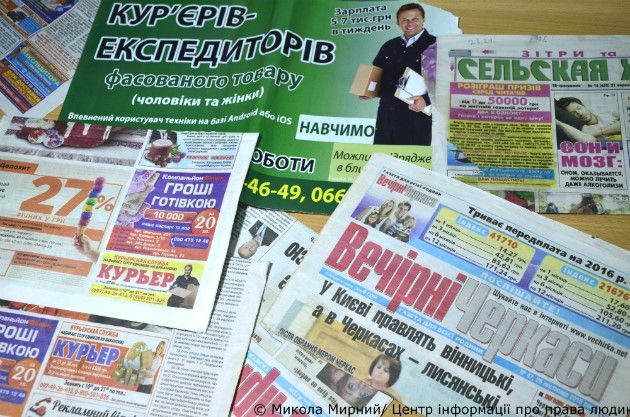 Kyiv judges seem very uninterested in moving forward on an important trial of suspected ‘recruiters’ for fake jobs in Russia, one of the scams that may have been used to force Ukrainians to fight in Donbas or Syria.  As with most human trafficking trials it can be hard to get people to come forward, but why the court is dragging its heels is less easy to understand.  .

Vita Musatenko is representing over 70 victims of a scam in which Ukrainians were offered high earnings for work as ‘couriers’ or similar in Russia, and in fact ended up in the clutches of drug traffickers.  Vira Volodiy, who heads a civic organization called ‘Fighting Human Trafficking’, says that her son was one of the victims.  He decided to go to Russia to work to pay off a loan he’d taken out, and only learned when he got to Russia that it was not electrical goods he was to be dealing with, but narcotics.  He immediately refused to have anything to do with this, and was told that if he didn’t, he’d “return home in pieces, or end up missing without trace”.

He and many like him are told that they must pay back the money for tickets, for the smartphones they’re given and ‘rent’ for their accommodation.  Sometimes their documents are also taken away.

Olena Biletska says that her son went to Russia after having no success over three months in finding work in Ukraine.  His phone and sim-card were taken away and destroyed after he got to Russia.  He realized what the work was and decided to return to Ukraine.  He was threatened by his ‘employers’ and then, after he did manage to get a ticket and phone his girlfriend to tell her, he was arrested by the Russian police. He was accused of being part of a supposedly Ukrainian gang working in the Moscow region. Such alleged Ukrainian links are used as a weapon in Russia’s propaganda drive against Ukraine and as a useful method of deflecting attention from Russia’s mounting number of Ukrainian political prisoners.

Ukrainians end up imprisoned under one or two articles of Russia’s criminal code –228 (illegal dealing in narcotics) with this carrying up to 15 years’ imprisonment, and sometimes also 210 – creating a criminal organization, up to 20 years.   There may be some who knowingly entered into such criminal activity, but many are simply victims of human trafficking.  They are also likely to face discrimination as Ukrainians, and can end up being thrown into punishment cells for no reason, etc.

There are even more sinister scenarios.  Vitaly Moskalenko, Ukraine’s Consul General in Rostov on the Don, reported back in February 2017 that he was aware of a related scam where people arrive in Moscow.  Their passports are taken away and they get sent to the South of Russia, supposedly on their first job.  They get seized immediately with investigators then trying to recruit them, often to fight in Donbas or Syria, or to agree to collaborate with them.  Moskalenko said that they knew of 100  such cases in 2015, with this increasing to 250 in 2016.

In early 2017, human rights groups reported around two thousand Ukrainians being convicted of drug-related crimes since 2014.  While not all would be trafficking victims, very many undoubtedly are.  At present, 200 Ukrainians have victim status, with the absolute majority of these being people now held prisoner in Russia.  Of those who have managed to escape, many may be frightened to approach the police, especially if they were forced into such work for a while before escaping.

For a long time, the advertisements promising good earnings in Russia could be seen pasted all over Ukraine.  After rights groups sounded the alarm, the police did step in, ensuring that the ads were removed and arresting suspects of two scams.

Three people are currently in detention awaiting trial on charges of human trafficking for their believed role as recruiters, while a fourth is under house arrest.   There have, however, been four attempts since July 2017 just to hold the preliminary hearing in the Solomyansk District Court before the trial proper, and the lawyer representing victims and human rights activist Maria Tomak are concerned at the constant delays.  Musatenko notes that both sides were calling for the trial to begin, yet “for incomprehensible reasons this has not happened”.

In a recent interview, Tomak noted the need for victims to come forward to ensure that the case does not collapse. It could in any case, she warns, given the large amounts of money involved, hence the great importance of keeping the trial in the public eye.

There has also been a suggestion that employees of the Department of State Defence of Ukraine could be implicated in this scam.  As Tomak points out, if this were proven to be true, it has implications for Ukraine’s national security, and her formal request for an official reaction and information can only be reiterated.