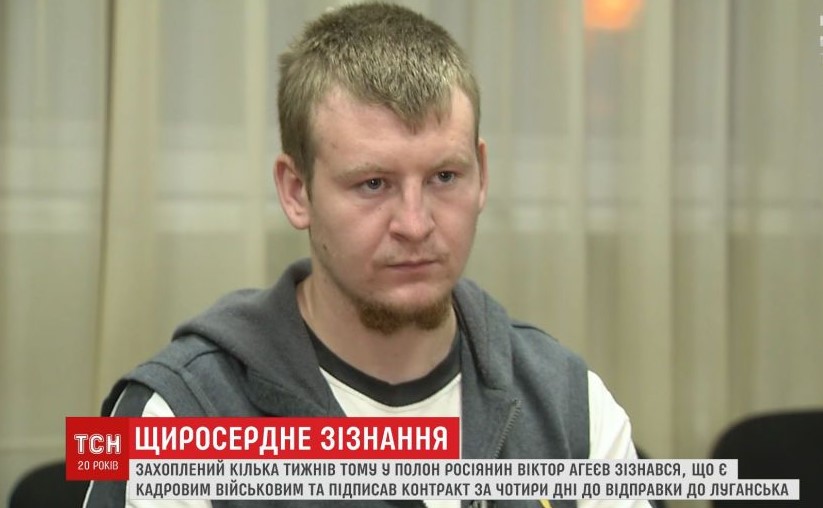 Ageyev was accused only of taking part in fighting on the side of the self-proclaimed ‘Luhansk people’s republic’ and of illegal possession of firearms and ammunition.  The Novoaidarsk court gave two years’ less than the 12 year sentence with confiscation of property demanded by the prosecutor.  Victor Chevhuz, whose appearance as Ageyev’s new lawyer in November 2017 coincided with the startling removal of any mention that Ageyev was in the Russian army,  has said that they will be lodging an appeal against what he asserts is an excessive sentence and a “mistaken” qualification as participation in a terrorist organization.

Ageyev’s part in the events immediately preceding his arrest were never in dispute.  Nor, at the beginning, was his status as a Russian contract soldier.

Ageyev was captured on June 24, 2017, near the village Zholobok in the Luhansk oblast after a clash between Ukrainian soldiers and an LPR sabotage & reconnaissance unit.   He was said to have been captured together with weapons used by the Russian army.

Vladyslav Klochkov, the commander of the Ukrainian unit, reported at the time that the sabotage group had been led by a Russian officer, Aleksandr Shcherba (codename Alex).  According to Klochkov, both Shcherba (or Shcherbak) and a sniper had been killed when they tried to shoot their way out after the Ukrainian soldiers demanded their surrender.  The militants’ version is that the Ukrainian side committed atrocities in capturing the fighters, but this has not been backed by any evidence.

Two of the men - Bohdan Venger and Danylo Hladkov - were on trial together with Ageyev;.  A fourth man, Andriy Stoyanov, had concluded an agreement with the prosecution and already received a 6-year sentence.

It was the BBC Russian Service who first reported that Ageyev had returned to the Russian Army after finishing his military service, and had signed a contract in March 2017.  The BBC had been fobbed off by the Russian military, but had spoken with two former colleagues.  One of the two, speaking on condition of anonymity, had confirmed that both had finished military service in 2016, but that Ageyev had later gone on to serve under contract in military intelligence.

Despite the public denials from Moscow after the BBC report was published, and likely pressure, Ageyev’s mother did not change her testimony.  In a letter to the Altai branch of the Yabloko political party, published by Novaya Gazeta, she asked for help in freeing her son who had left on March 18 to serve on contract in Bataisk in one of the units in the Rostov oblast. She wrote that he had phoned from there several times, once a week.  The last call had been on May 30 during which he had said nothing about any plans to terminate his contract. He had been pleased with his new work, she added, and had sent the order issuing him with a new military rank of lance-corporal, Order № 866 issued on 4.05.2017.”

The shift in story became clear at the preliminary hearing on November 24, 2017 where all parties behaved rather strangely.  By the next hearing on December 14, there was no doubt that Ageyev himself was denying that he had been a Russian contract soldier.  He claimed that he had “signed a contract” with LPR.

It should be said that the two Russian military intelligence officers Alexander Alexandrov and Yevgeny Yerofeyev also changed their story, after consistently confirming for a long time that they were acting military officers.  They were, however, convicted as Russian spetsnaz officers in April 2016, before being exchanged for political prisoner Nadiya Savchenko.

This time, Ukraine’s prosecutor effectively went along with the changed story. The indictment says that Ageyev was a private individual, though does clearly state that he expected remuneration for his supposed role within the ‘LPR militia’.

The SBU could, of course, have made a mistake, but that does not explain the testimony from Ageyeev, his mother and friends, as well as the apparent efforts to conceal incriminating evidence.

There could have been an elaborate plot to try to discredit Ukraine’s accusations of direct involvement of Russian military personnel in the conflict.  That would explain the testimony from Ageyev & Co., but would make the relative silence about the case by Russian state-controlled media incomprehensible.  Any such attempts to discredit Ukraine would surely involve maximum publicity.

The most likely explanation still seems to be linked with the first exchange of prisoners of war and civilian hostages in well over a year, ostensibly prompted by a phone call from Russian President Vladimir Putin.  That progress, or specific exchanges in the future, may have been made contingent on Ukraine changing its stance on Ageyev’s status while in Donbas.

It was evident during court hearings that Ageyev and the two Ukrainian citizens on trial with him were hoping to be part of an exchange.

Russia, and its proxy ‘republics’, are holding so many Ukrainians prisoner on trumped-up charges that the release of any of them must be a high priority.  So, however, must be ensuring that Russia answers in international courts for its military aggression against Ukraine and human rights crimes.

Ukraine currently has one case against Russia before the International Court of Justice and is also hoping that the International Criminal Court will agree that Russia is a party to the war in Donbas, and therefore that this is an international military conflict under its jurisdiction.  What ‘everybody knows’ will not do for the courts in the Hague who want hard evidence – including evidence of Russian military servicemen being sent to kill Ukrainians on Ukrainian territory.