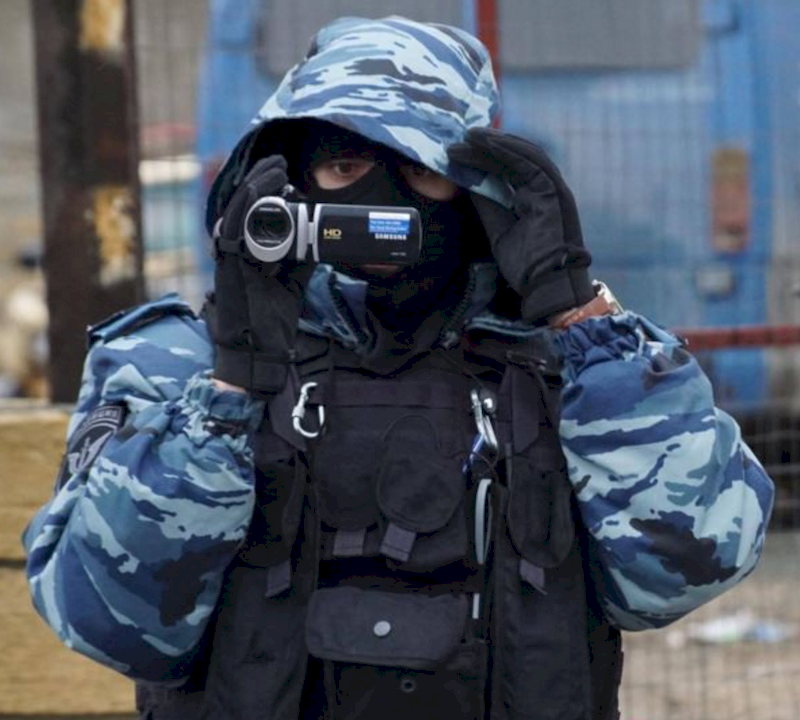 The regularity with which certain ‘judges’ appear in politically-motivated cases in Russian-occupied Crimea has long been the subject of scrutiny.  Lawyers and journalists have recently identified at least two ‘witnesses’ who seem to be migrating from one political trial to another, and there are multiple cases where the supposed ‘witnesses for the prosecution’ are either people whom the FSB brought with them, or people who signed unread documents under duress.

It can certainly seem impressive when you say that there are several dozen witnesses for the prosecution.  The problem for the FSB in Crimea has been that the defendants themselves and their lawyers insist on their right to challenge such testimony, and none of it withstands scrutiny.   Russia’s revenge trial of Crimean Tatar Mejlis leader Akhtem Chiygoz over a pre-annexation demonstration was legally farcical from the outset, but made no better by the defence’s interrogation of a vast number of supposed ‘victims’.  It was noticeable that the prosecution suddenly changed the indictment in the linked trial of five other Crimean Tatars.  Over a year into senseless court hearings over woolly charges, the prosecutor suddenly removed 83 of the 86 supposed ‘victims’!

Falsification was flagrant in the ‘trial’ of Ukrainian activist Volodymyr Balukh over ammunition and explosives allegedly ‘found’ in the attack of his common-law wife’s home after an unexplained search with at least one police officer who was not on duty that day.  The FSB had brought all their own people, including the people who effectively held Balukh and his wife prisoner so that they could not see what was being ‘found’ in the attic.

Krym.Realii writes of the ‘witnesses’ their correspondent saw at the trials of journalist Mykola Semena and Crimean Tatar activist Suleyman Kadyrov. Semena was charged with ‘public calls to action aimed at violating Russia’s territorial integrity’ [Article 280.1 of Russia’s criminal code] over an article in which he reiterated the position taken by UN, and all democratic countries and supported the Crimean Blockade as a means towards ending Russian occupation of Crimea.   Despite the grotesque absurdity of the charges, Nadezhda Igorevna Shkolnaya from the Zheleznodorozhny Court in Simferopol passed a two and a half year suspended sentence, with a ban for three years on any public (and therefore journalist) activities.   On 1 March, ‘judge’ Anastasia Shapoval from the Feodosia Court passed a two-year suspended sentence on Kadyrov for the comment on Facebook: “Crimea is Ukraine. It always was, is, and always will be”.   He was banned from any public activities for two years.

The correspondent writes that at Semena’s trial he “noticed those people as in the general mass of witnesses for the prosecution they represented ‘the outraged public’, that is, they had supposedly seen the journalist’s publication, felt indignant and reported it to the FSB [Russian security service].  This situation seemed, to put it mildly, trumped up.  When I saw familiar faces at the trial of Suleyman Kadyrov, I tried desperately to recall where I could have seen them earlier. I remembered when a second witness entered the courtroom with a feature that marked him out (for ethical reasons I will not be more specific).  I told the lawyer who was just as surprised as I was.  We laughed merrily, that the ‘office’ has a shortage of people”.

Krym.Realii has found details of two young men who are supposed to have ‘come upon’ first Semena’s article, and then Kadyrov’s Facebook repost and comment.

In Semena’s trial, 30-year-old Alexander Voytseshuk claimed that he came upon the article while “monitoring Ukrainian sites for public safety” and noticed what he called “separatist leanings”.  It just so happened, he says, that two or three days later, some FSB officers turned up and he told them what he’s seen.

In ‘court’ he asserted that the article “contains a specific threat to his family” since, in the words he uttered, “there was a call to unite citizens to disrupt social structures, that Crimea is Ukrainian and that Crimea will soon return”.

A few months later, he gave testimony against Kadyrov, this time admitting that the FSB had asked him to come to their office to view Internet pages.

27-year-old Denis Barantsev also “noticed Semena’s article by chance”.  He concluded that Semena was called “to carry out an armed operation to liberate Crimea from Russian oppression.”

There is nothing of the sort in the article which is described here and can be read in Russian.

Barantsev has exactly the same story about how he came to give testimony against Kadyrov.

54-year-old Larisa Kitaiska received a 2-year suspended sentence in December 2017 over supposedly ‘anti-Russian posts’ on Facebook.  She is convinced that the ‘witnesses’ were all just carrying out the task for the FSB, and says that she recognized some as being from the so-called self-defence paramilitaries who help Russia seize power in Crimea.  Of ten ‘witnesses’, only two knew her.  The others all just repeated, as if reading the same script, that they had seen her at a demonstration for Ukraine and had therefore drawn the conclusion that she had circulated statements in the social media inciting hatred.

Credibility is clearly not an issue in such cases.  The only problem arises when ‘witnesses’ retract their ‘testimony’, saying that their words were twisted out of context or that they had signed what they were ordered to sign, out of fear that they would themselves be arrested.  This was the case with the ‘trial’ of the first four Crimean Tatars charged with unproven involvement in the peaceful Hizb ut-Tahrir movement which is legal in Ukraine.  The only named ‘witnesses’ who confirmed testimony allegedly given to the ‘investigators’ were an ex-SBU turncoat known to have had a corruption-based reason for wanting to revenge himself against two of the men – Ruslan Zeytullaev and Ferat Saifullaev, as well as a notoriously Islamophobic ‘expert’.

In such cases, Russia’s FSB turn to ‘secret witnesses’ who say whatever is required, with the judges conveniently asking no questions, even when the man is clearly getting advice from somebody sitting next to him, and is still giving contradictory testimony.

All of this is grotesque, but deadly serious since many of those now in indefinite detention are facing sentences of 15 years or more (more details here).