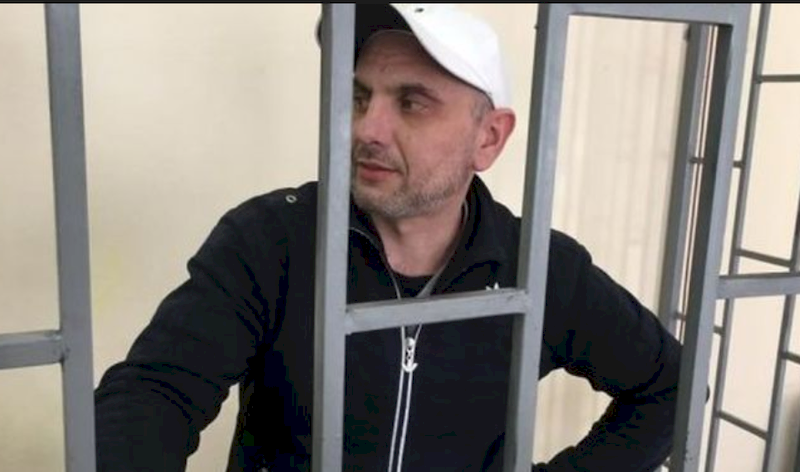 The ‘trial’ has begun of Andriy Zakhtei, one of the four Ukrainians seized by the FSB in Russian-occupied Crimea in August 2016 and accused of involvement in a supposed ‘Ukrainian Crimea saboteur plot’.  It appears that the entire ‘trial’ will be held behind closed doors, enabling Russia’s FSB to conceal the lack of a credible story, not to mention evidence.

A few months ago, Zakhtei agreed to ‘cooperate with the investigators’ by ‘admitting guilt’, with this almost certainly in exchange for a shorter sentence.  He has been held prisoner since August 2016 in appalling conditions and under heavy pressure to ‘confess’, and doubtless understood that, whatever he did, he would not be freed.

The changed plea will make the FSB’s paperwork look better, but cannot hide the sordid reality behind this case, which was based solely on four ‘confessions’ and a supposed hiding place with weapons, which contained no DNA traces linking it to any of the men. Zakhtei not only retracted his ‘confession’ as soon as the FSB was forced to allow him to see a lawyer (after two months), but also gave harrowing details of the treatment he received to force a confession out of him.  The allegations of torture in his case and that of Yevhen Panov have already been sent to the European Court of Human Rights.

A further absurdity in this case concerns citizenship.  Zakthei was the only Ukrainian actually living in Crimea with his wife and child, and had taken Russian citizenship.  In March 2017 he renounced this, saying that he was disillusioned by the Russian justice system and lack of rule of law, seen in how they had falsified his case.  Russia wasn’t having this and a little later decided to themselves strip him of this citizenship, and claim, after having illegally handed out Russian citizenship on invaded and annexed territory, that Zakhtei had unlawfully obtained Russian citizenship.

This is now one of the charges, together with storing and transporting weapons, and preparing an act of sabotage.  As mentioned, a forensic assessment found no traces of fingerprints or DNA on the ‘hiding place’ which Zakhtei and Yevhen Panov were supposedly using.

Of the four men whom the FSB extracted ‘confessions’ from in early August 2016, two men – Redvan Suleymanov; and Volodymyr Prysich - were eventually convicted of charges that bore little or no relation to these supposed confessions.  Yevhen Panov

Both Zakhtei and Yevhen Panov were were seized on August 7, 2016.  On August 10, the FSB claimed that it had foiled terrorist acts planned by the Ukrainian Defence Ministry’s military intelligence.  It asserted that there had been major incidents, with shelling from mainland Ukraine, during the nights from 6-7 and 7-8 August, with 2 Russians – an FSB officer and a soldier – killed.   There are independent reports about something taking place in the early hours of Aug 7, though they suggest rather that an FSB officer died in a drunken brawl between Russian border guards and Russian FSB officers.  There is nothing at all to back the claims about the second night and supposed shelling from Ukraine.  There was another reason for scepticism about the Russian claims, namely that the alleged incidents had been preceded by Russian moves to block access to independent Internet websites and coincided with Russia’s deployment in occupied Crimea of a huge amount of military technology.

There are grounds for believing that both Panov, who is a former Ukrainian soldier and a volunteer in Energodar (Zaporizhya oblast) and Zakhtei were deliberately lured to the place where they were seized.

Both Zakhtei and Panov were prevented from seeing lawyers for two months, until the European Court of Human Rights intervened.  Panov had a brief meeting with his lawyer during which he confirmed what the video seemed to show, namely the torture he had faced.  Russia almost immediately removed Panov and Zakhtei to Moscow, however that did not help conceal the details of the torture which both recounted to lawyers in Russia.  They were then taken back to Crimea with the calculation probably being that the shocking conditions and greater scope for putting pressure on the men would force both to ‘cooperate’.  This has not worked with Panov, and the testimony Zakhtei gave over the space of a year is not going anywhere – except to the Human Rights Court in Strasbourg.