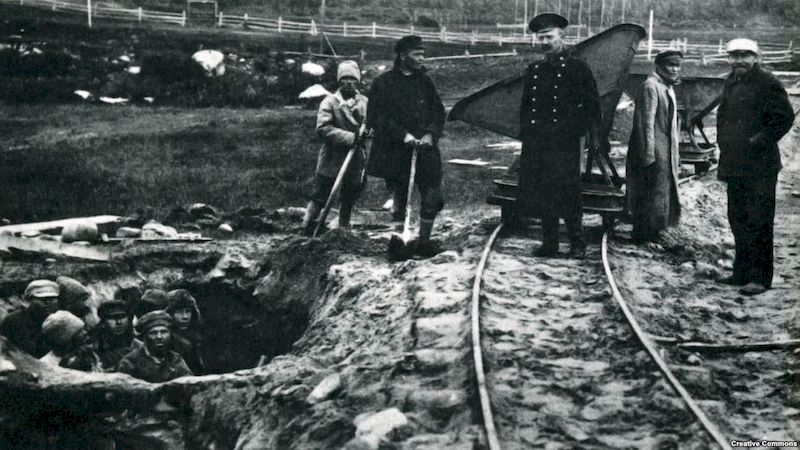 Prison camp inmates on the Solovki Islands in 1925

MOSCOW -- Historian Yury Brodsky sees the far northern Solovki Archipelago as a kaleidoscopic microcosm of Russia -- its history, culture, nature, and spirit all brought together in one remote and windswept corner of a vast country.

"The most varied people come here and they all need Solovki," Brodsky tells RFE/RL. "It can change your world view. I’m trying to say that Solovki is a reflection of our entire world, of our entire history."

"Architects note the extraordinary architecture there and this is true," Brodsky adds. "Ornithologists go there to study the birds -- there are about 220 bird species on Solovki. The marshlands there are considered objects of international significance. Scientists who study the beluga whale note that Solovki is one of the very few breeding areas for the beluga. For them, the beluga is the most important thing about Solovki. [Other scientists] remind us that we need to study local lichens, of which there are 170 types because of the ideal climate for them.... Russian Orthodox believers, Old Believers, and others come here."

That diversity, Brodsky says, is now in danger from the Russian Orthodox Church, supported by the state, which is trying to transform it into a monoculture, literally and figuratively whitewashing the islands and their significance.

"At Solovki they are carrying out a completely unjustified, in my view, restoration," Brodsky says. "The 16th-century walls of the Solovetsky Monastery were covered with lichens of various colors and various textures. All this, leaving aside everything else, was amazingly beautiful. But these lichens are being washed away with chemicals. All that remains are gray stones."

The Solovki Archipelago is a group of some 100 islands and islets in the White Sea about 300 kilometers west of Arkhangelsk. An Orthodox monastery was founded there in the 15th century. Peter the Great visited several times while testing out ships for his nascent navy. The heavily fortified monastery withstood a British naval attack in 1854 during the Crimean War, and scientists set up a permanent observatory there in 1898.

After the 1917 Bolshevik coup, the government disbanded the monastery, killed its leadership, and sent the monks into exile. In 1923, the government set up the first camp of the later infamous GULAG system. In 1992, the islands were named a UNESCO World Heritage Site.

This history and much more is the subject of Brodsky’s new book, Solovki: Labyrinth Of Transformation, published by the Novaya Gazeta publishing house.

In December, however, a group of Orthodox activists asked the Antiterrorism Center of the Interior Ministry (Center-E) to investigate the book, charging that it "insulted religious feelings" by documenting the use of the monastery as a prison during the tsarist era.

In December, more than 80 leading academics and cultural figures wrote an open letter to Federal Security Service (FSB) head Aleksandr Bortnikov to protest an interview he gave to mark the 100th anniversary of the founding of the Soviet secret police.

The scholars charged Bortnikov with "openly carrying out a process of creeping Stalinization on the state level." They cited the investigation of Brodsky’s book, the ongoing criminal case against Karelian gulag historian Yury Dmitriyev, the state takeover of the Perm-36 gulag museum, and pressure against the Memorial NGO as examples of this phenomenon.

A review of Brodsky’s book on an Orthodox website notes the author’s "feeling of love for Solovki" but charges that it also demonstrates "a dislike, a surprising dislike, of the centuries-long history of the Solovetsky Monastery and Orthodox Russia."

The transformation of Solovki that Brodsky warns of began in 2012 when, after a visit to the monastery by Patriarch Kirill, monastery head Archimandrite Porfirii was appointed head of the state Solovki Museum and Reserve. Porfirii’s birth name is Vladimir Shutov.

In April 2010, Shutov and Porfirii (yes, with himself) signed 109 agreements on the transfer of museum property to the monastery, according to an investigation by Novaya Gazeta.

During another visit in 2014, Patriarch Kirill announced the idea of creating at Solovki a scholarly center for the study and commemoration of Orthodox priests and others who were persecuted by the state during the first decade of Soviet rule. Kirill’s own grandfather, Vasily Gundyev, spent five years in the Solovki labor camp.

Despite this plan, Brodsky says, the labor-camp history of Solovki is being steadily erased. "Olga Bochkaryova, who headed the museum’s department of the Soviet period, was fired," he says. "She is also being evicted from her apartment, which means she’ll have to leave the island because she has nowhere else to live."

"Across from the church altar, near a viewing point, there are some stone remains in the ground," Brodsky says. "There was once an image of a star in a circle there. That is where the chekisty [Soviet secret police] shot the prisoners. It is a place that is soaked in blood to a depth of several meters."

Now it is a popular place for wedding parties to come and the air is often full of shouts for the newlyweds to share a kiss. "Someone bought some snowmobiles and visitors can ride down the hill from that place," Brodsky adds. "I don’t blame these people. They don’t know what happened there. There are no memorial tablets."

The famed Soviet linguist and historian Dmitry Ligachyov spent five years in the camp at Solovki, studying "criminal folklore," as he would later say. The governor of Arkhangelsk Oblast, Igor Orlov, has promised that a memorial would be set up in the monastery cell where Ligachyov spent much of his term, but that has never happened.

"I know there will never be a memorial room there," Brodsky says. "Thousands of people were imprisoned in that monastery. But all the wall etchings scratched by the prisoners have been wiped away. The bars have been removed from the windows; the peepholes have been taken from the doors. They are trying to create a new, church-like atmosphere by destroying any traces of the camp because that does not fit into the conception of the current monastery. Traces are being destroyed and destroyed intentionally. This is horrifying."

Aleksandr Cherkasov, executive director of the Memorial foundation in Moscow, says the complaint of inciting religious enmity against Brodsky’s book is unfounded and is an obstacle to understanding the history of Solovki and of Russia.

"In history, everything is connected," he tells RFE/RL. "You can’t take one part and say -- that’s the way it was. You have to understand why it was. The Bolsheviks didn’t create the Solovki camps. Solovki was a prison beginning in the 16th century. Probably, the monks didn’t want this, but they were law-abiding people. They became guards in a prison, executioners. From the monastery walls toward heaven the prayers of monks and the curses of prisoners were simultaneously rising toward heaven."