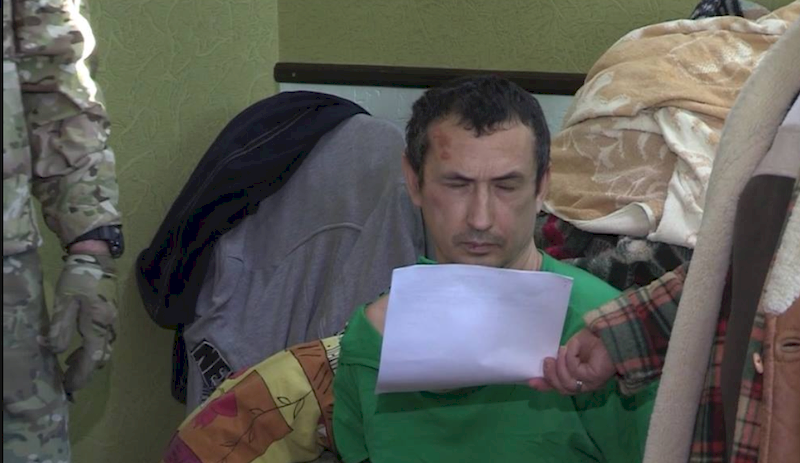 Yevhen Karakashev, an anarchist activist from Yevpatoria who has taken part in pickets calling for the release of Oleksandr Kolchenko, Oleg Sentsov and other political prisoners, has himself been remanded in custody, after almost certainly being brutally beaten by the police.  The renowned Memorial Human Rights Centre has already indicated that the charges, linked solely to social media posts and  potentially carrying a sentence of up to seven years, appear politically motivated.

Plain-clothes officers burst into 39-year-old Karakashev’s home on February 1, forced him to the floor, with his arms behind his back in handcuffs.  A search was carried out of his home, and he was taken away and remanded in custody the following day.  There was a long period in police custody before he was able to phone a friend and ask for a lawyer to be contacted, and it seems likely that the multiple abrasions and other injuries were sustained during that period.  The ‘investigator’, Allgiz Abushev was later unable to remember how long Karakashev had been held in handcuffs.  In remanding him in custody on 2 February, ‘judge’ Alexei Nanarov saw no need to question the prominent abrasion on Karakashev’s forehead, and the police have since refused to initiate proceedings over the detained man’s injuries.

Karakashev first attracted Russian FSB attention in the summer of 2016 when a group of Crimean anarchists tried to hold a picket outside the FSB office in support of  fellow anarchist Oleksandr Kolchenko and other political prisoners.  They were driven away, with Oleksiy Shestakovych then detained and fined.  Shortly afterwards, Shestakovych faced further harassment and court proceedings, with the pretext then also a post on social media from four years earlier.  It seems that Karakashev was also summoned to the so-called ‘Centre for Countering Extremism’ at the beginning of 2017, but refused to provide the required ‘explanation’.

He is now facing very serious charges – of inciting enmity, under Article 282 § 2 of Russia’s criminal code, and of ‘public calls to terrorist activities or public justification of terrorism’.  The latter carries a sentence of up to seven years.

The Memorial Human Rights Centre reacted swiftly, stating that there is strong likelihood that “the criminal proceedings against Yevhen Karakashev were initiated in the context of his opposition civic and political activities as a frequent participant in protests in Crimea.”   They view this as part of a mounting attack on left-wing activists and anti-fascists since January 2018.

The number of Ukrainians imprisoned in Russian-occupied Crimea or Russia is already well above 60 and rising. Several men have clearly been targeted for their civic activism and / or their peaceful opposition to Russian occupation.

The first left-wing activist to be imprisoned after Russia’s annexation of Crimea was, of course, Oleksandr Kolchenko.  He and Oleg Sentsov were seized in May 2014 together with two other opponents of Russian occupation  – Gennady Afanasyev and Oleksiy Chirniy.  All four men were subjected to torture to extract ‘confessions’ of having been involved in a ‘Right Sector terrorist plot’.  There was nothing to indicate any presence of the ultra-nationalist Right Sector in Crimea, and the idea that Kolchenko (or Sentsov) would have taken part in a far-right movement’s ‘plot’ was absurd.   Since Kolchenko and Sentsov adamantly refused to ‘confess’ to non-existent crimes, Russia enacted a show trial which ended in August 2015 with Sentsov sentenced to 20 years, Kolchenko to 10 (details and addresses to write to here)

Photos of Karakashev detained from here