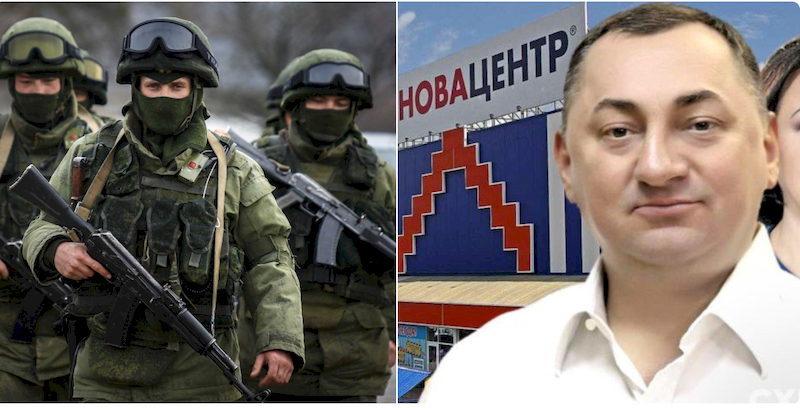 Skhemy investigative journalists report that Ukrainian MP and wealthy businessman Oleksandr Hereha has effectively retained his business in Crimea despite Russia’s occupation and in breach of both Ukrainian and international sanctions.  Hereha and his wife Halyna are using the same implausible denial and tricks used by Siemens and other international firms breaching sanctions.

Hereha has been an MP since 2012.  Under the regime of Viktor Yanukovych, he was in the ruling Party of the Regions and voted for the notorious 16 January 2014  ‘dictatorship laws’.  He had reportedly tabled a bill in the Verkhovna Rada seeking to prohibit boycotts of Ukrainian businesses, after moves to boycott his chain of ‘Epicentre’ building stores because he was viewed as complicit with Yanukovych and the violent attacks on Maidan activists.  He resigned from the Party of the Regions on 21 February 2014, after the bloodshed on Maidan, though before it became clear that Yanukovych had fled.  He was re-elected to parliament in October 2014 as a non-affiliated candidate.

Skhemy journalists have tracked down the Russian registrar entry for the Ukrainian companies ‘Epicentre-K’; ‘New Line’ and others.  These are all chains that are owned by Oleksandr and Halyna Hereh, however the Russian entry has them registered as founded by the open share company ‘Rusline Co.’

Rusline Co is, in turn, a major property tax payer contributing heavily to the budget of Russian-annexed Sevastopol.   It is also involved in the activities of new hypermarkets called ‘Novacentre K’.  That chain is registered as a Russian legal entity, but the hypermarkets just happen to be on the sites where the Herehas’ ‘Epicentre K’ stood until annexation.

Rusline Co also has an office in ‘Russtroi K’ which holds 99% of ‘Novacentre K’.

Hereha initially denied any business linked with Epicentre-K or affiliated structures in Russia or Crimea.  He then, however, said: “Who knows.  Maybe we do have a link to these companies and are covertly working on enemy territory in order to sooner or later spark the fire which will spread through those territories and they will become as independent as our country”.

He added that “it’s simply impossible for Ukrainian firms to work in Crimea or Russia”.

Not so very impossible, it would seem, if it depends only on the paperwork, and on the political will to notice methods being used to bypass sanctions.

Such political will appears to be thin on the ground since Skhemy first cast the spotlight on the Herehas at the end of 2014.

On December 12, Skhemy journalist Maxim Savchuk reported that the building hypermarkets ‘Epicentre’ and ‘New line’ [Nova Liniya] were complying with Russian legislation and paying Russian taxes in occupied Simferopol and Sevastopol.   The fiddle had occurred in April, with the Russian register of legal entities for tax purposes being ‘Novacentre K’, whose legal address was that of one of the Herehas’ hypermarkets in Crimea.

The Skhemy journalists then cited further evidence to believe that Novacentre K was linked with the Hereha hypermarkets.  The General Director of Novacentre-K was Yury Nosach who had up till recently been identified as the commercial director of Epicentre.  By telephone a Skhemy reporter was even told that Epicentre had simply re-registered as the supposedly Russian ‘Novacentre-K’.

The journalists received official denials, but found other evidence confirming such suspicions.

It is immensely frustrating that nothing beyond implausible denials appears to be required of the Herehas or others breaching sanctions.

In theory, the German prosecutor is investigating how Siemens gas turbines came to be provided to Crimea in grave breach of EU sanctions.  Since Siemens appears to have dropped any pretence of leaving Russia ‘in protest at being deceived’, it seems clear that this German firm with a background in collaborating with the Nazi regime thinks it has nothing to fear.

There are grounds now for believing that a member of Ukraine’s parliament has only nominally ended his business dealings with Crimea, despite Russia’s occupation and its mounting repression and human rights violations. Reaction is needed now, with silence a clear message that sanctions are there to be bypassed.